Lama Zopa offered this advice to FPMT Centers regarding the war in Afghanistan. It is a rough transcript made by Roy Harvey from the audio recording of a teaching given at Land of Medicine Buddha, Friday Oct. 27th, 2001, lightly edited by Claire Isitt. 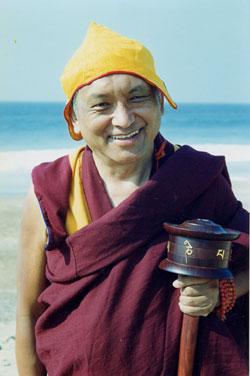 What I wanted to mention to the centers was to make sure you don't rejoice. It's very heavy negative karma.  When we hear the name of the Taliban, or whoever, of course if there is dislike or hatred towards them, then when you hear that they have been killed or destroyed then naturally you rejoice or feel happy.  Then when you rejoice, for example when you hear 1,000 people were killed or hurt, you feel happy - and then you receive the same heavy karma of having killed 1,000 people.  You are sitting on the meditation cushion, and you hear the information, then simply by rejoicing or just feeling happy it's the same heavy karma as having killed 1,000 human beings even though you are not in the war. You didn't actually bomb or shoot them, you didn't do anything.  But you get the same heavy negative karma as that person who actually killed 1,000 people.

So as Pabongka Dechen Nyingpo explained in Liberation in the Palm of your Hand, I thought I would mention that there is great danger when you hear the news and then immediately feel happy and rejoice.  If you have dislike or hatred towards them then this happens.  If you didn't have hatred towards them I don't think the rejoicing would happen.  If you have hatred or anger then the rejoicing happens, so bringing a very heavy outcome.

People who remember lam-rim in daily life, remember about karma and what is said in Liberation in the Palm of your Hand and the lam-rim teachings and who practice this don't need to be told.  But others, who maybe heard Lam-rim but maybe don't remember it in daily life, it might be useful to just announce this or to remind those students.

When I heard the first time about the destruction in Afghanistan, where there were a few places destroyed, I was not careful at that time. The news didn't say 'people' but said some 'places' were destroyed.  I was not careful with the mind and watching the mind, so I felt something kind of good or something, then immediately I remembered what I felt.  There were no persons mentioned or killed, but there was a place destroyed.  So after that I was more careful.  So be more careful not to rejoice when you hear the news.

Of course if one meditates like this the view changes.  But when you don't meditate and when your mind is not in this state, holding those sentient beings as precious, with compassion, then you see them as undesirable.

Usually you feel heavy when you don't meditate like that.