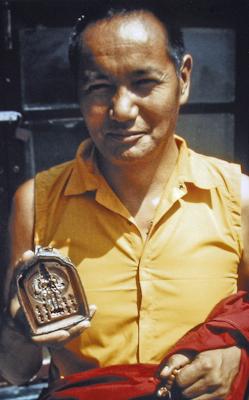 Welcome to the April issue of our monthly e-letter. We hope you enjoy reading updates of our latest work that we undertake together, for the benefit of all beings everywhere. Please share!

On the LYWA Podcast: The Source of All Happiness

May the good heart, altruism, source of all the happiness, may it be generated within my mind, in the mind of the family, all sentient beings; those who have this altruism, bodhicitta, thought of full enlightenment to benefit others, to be developed due to all these merits, positive actions that one did in the past, in the present, future.
- Lama Zopa Rinpoche 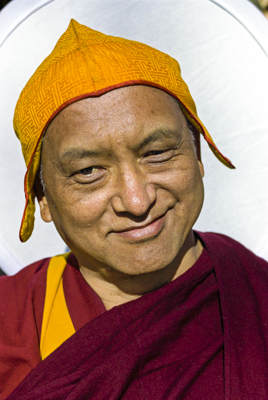 In this month’s podcast, Lama Zopa Rinpoche describes how the altruistic mind of enlightenment works and explains the great benefits from cultivating such a powerfully clear and pervasive mind. Rinpoche then explains in great detail how thought transformation practices are the very best way to deal with the inevitable stresses of modern life and the associated obstacles that repeatedly arise like waves as we move towards the mind of enlightenment for the sake of all beings. These teachings were given by Rinpoche in Bendigo, Australia, August, 1991. You can read the transcript of the teachings on our website.

From the Video Archive: Laughing with Lama

Because Lama is a bodhisattva, even talking in an ordinary way when Lama says something, laughs, makes a joke, it gave so much happiness in the other’s mind. Somebody might think, "Oh that doesn’t have much meaning" but the reality is that just a few words and a laugh from Lama have great benefit for some people. Their heart becomes totally transformed from the depression, the life that made them so unhappy. That is how Buddha and bodhisattvas guide sentient beings.
-From Lama Zopa Rinpoche's foreword to Big Love: The Life and Teachings of Lama Yeshe.

This brilliant laughter happened during Lama Yeshe's teachings on the Six Yogas of Naropa at Boulder Creek, California, 1983. Audio enhancement by John Paterno. The laughter is set to images from teachings given by Lama at Lake Arrowhead, California, 1975. Photography by Carol Royce-Wilder. Video editing by Megan Evart.

Visit and subscribe to the LYWA YouTube channel to view dozens more freely available videos from our archive. 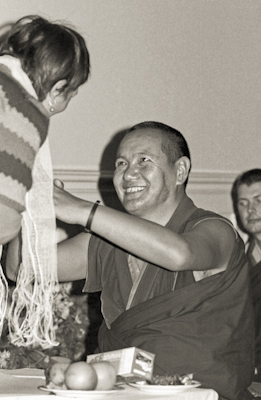 Recently posted to our website is a teaching on the four immeasurables excerpted from A Commentary on the Yoga Method of Divine Wisdom Manjushri, given by Lama Yeshe at Manjushri Institute, Cumbria, England, in August 1977. Edited by Nicholas Ribush.

On our website, you can always find a list of all the newly-posted advices from Lama Zopa Rinpoche. 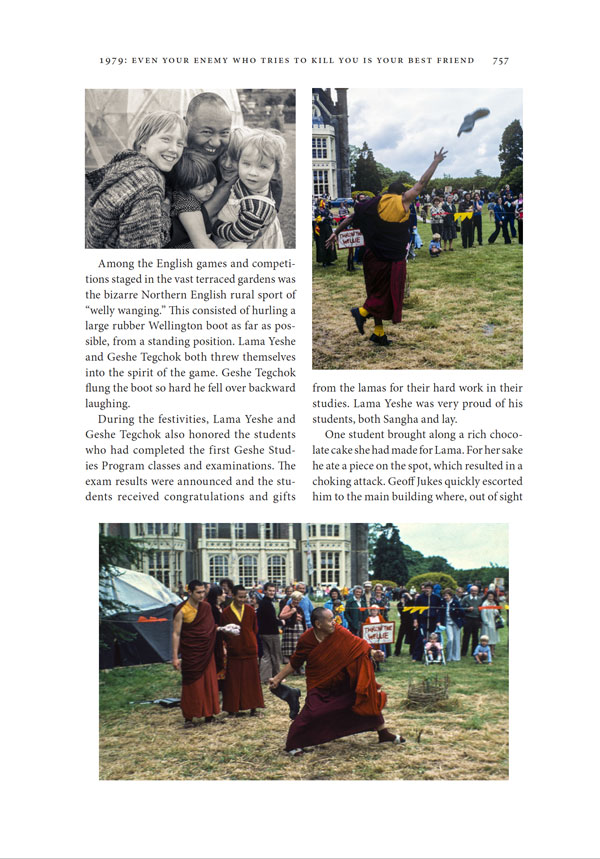 The book is progressing nicely and we are well into the design phase. We are looking at two hardcover volumes of over 700 pages each, with an average of a photo a page, so it's taking a bit of time to get everything right. If you would like to contribute to this beautiful project, please do so here. Thank you so much!

Thank you so much for your kind support, which makes it possible for us to spread the Dharma freely for the benefit of all sentient beings. This month we bring you a couple of teachings by Lama Zopa Rinpoche on why we should not eat animals. Personally, I think simply not eating animals is not enough, as I expressed in my article On Becoming a Vegan, which contains a link to Rinpoche's thoughts on the subject about ten years ago. Recently we heard that Rinpoche himself has now become a vegan.

THIS MONTH'S TEACHING: Why Be a Vegetarian

In these excerpts, Rinpoche asks us to abandon eating meat and become vegetarian, and to take good care of animals in other ways. 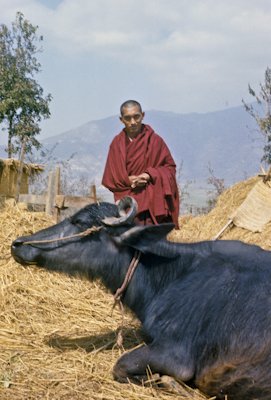 You can read the complete teaching here on our website. Excerpted from teachings on August 24, 2013 and August 27, 2013, given at the 100 Million Mani Retreat in Ulaanbaatar, Mongolia. Lightly edited by Ven. Joan Nicell.