By Adele Hulse, By Nicholas Ribush 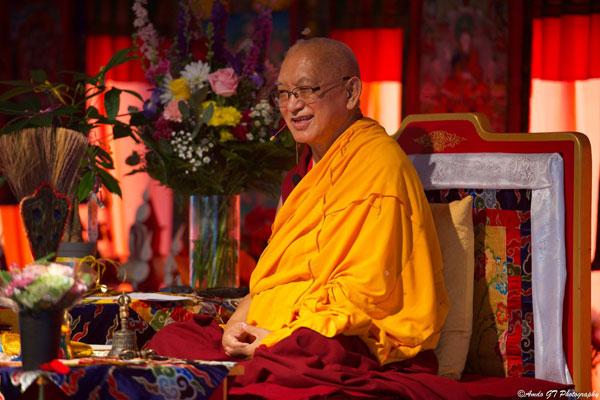 Welcome to the August issue of our monthly e-letter. This month we had the great pleasure of receiving teachings from Lama Zopa Rinpoche at Kurukulla Center in Boston! Over three days, Rinpoche conveyed the essence of Geshe Chekawa's text, the Seven-Point Mind Training, highlighting the importance of developing the good heart, and conferred Red Tara and Vajrasattva initiations. Rinpoche also joined the volunteers and staff of Kurukulla Center, Wisdom Publications and Lama Yeshe Wisdom Archive for a beautiful lunch, which was greatly enjoyed by all. See Kurukulla Center's Facebook page for pictures. 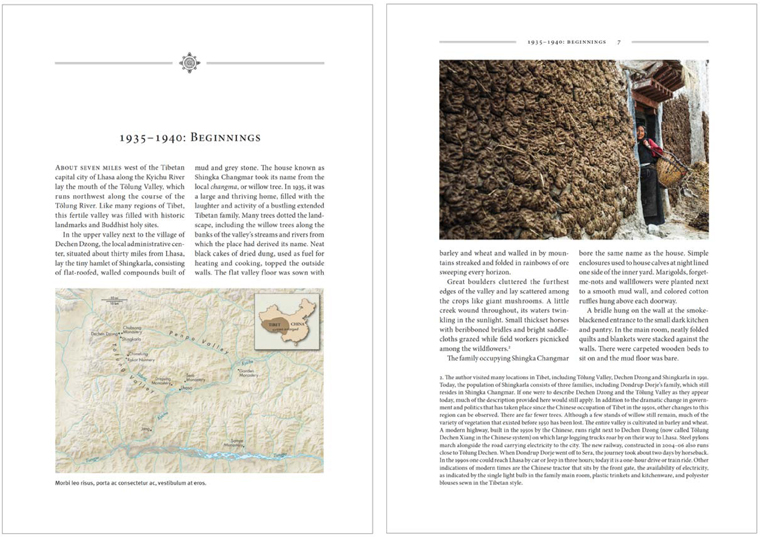 Big Love. Yes, it’s finally happening. We have spent this summer putting the finishing touches to our mammoth project, in the works since 1992, Big Love: The Life and Teachings of Lama Yeshe. The manuscript is now in the hands of our amazing designer, Gopa Campbell. At this point we are estimating two hardcover volumes, about 700 pages each, 7” x 10”, in a slipcase, with over 1,550 photos, full color throughout. Here are a couple of sample pages from the book.
This month's e-letter feature below is author Adele Hulse’s story of how she came to write this book. Here is a video of Adele reading from the book.
If you would like to contribute to this amazing (and very expensive) project, you can do so here. Thank you so much.

New on the LYWA Podcast: The Importance of Compassion in Daily Life 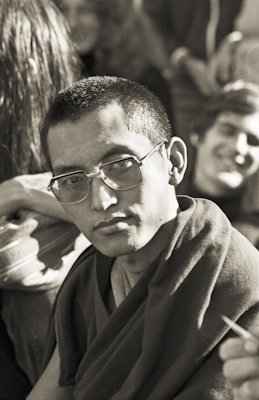 This month on the LYWA podcast we offer you a talk from Lama Zopa Rinpoche on how practicing compassion is the perfect way to make our lives supremely meaningful. Without compassion, our hearts are hollow and life is empty of meaning. With compassion, our hearts are filled with satisfaction, our lives with inspiration and our death will be most peaceful and happy. Rinpoche gave this talk during teachings by His Holiness the Dalai Lama in New York City, 1999. An edited version is the first chapter of Making Life Meaningful.

The LYWA podcast contains hundreds of hours of audio, each with links to the accompanying lightly edited transcripts.See the LYWA podcast page to search or browse the entire collection by topic or date, and for easy instructions on how to subscribe.

From the Video Archive: Offering Service at the Center

Lama Zopa Rinpoche gave this teaching during his previous visit to Kurukulla Center, in October 2012, speaking to Kurukulla Center students just after they had hosted a very successful visit by His Holiness the Dalai Lama. Rinpoche joyfully emphasizes the great benefits of inviting His Holiness to a center no matter how many hardships it might involve and the great benefits of working for a Dharma center in general. You can also read along with the edited transcript on our website.

Be sure to visit and subscribe to the LYWA YouTube channel to view dozens more freely available videos from our archive. 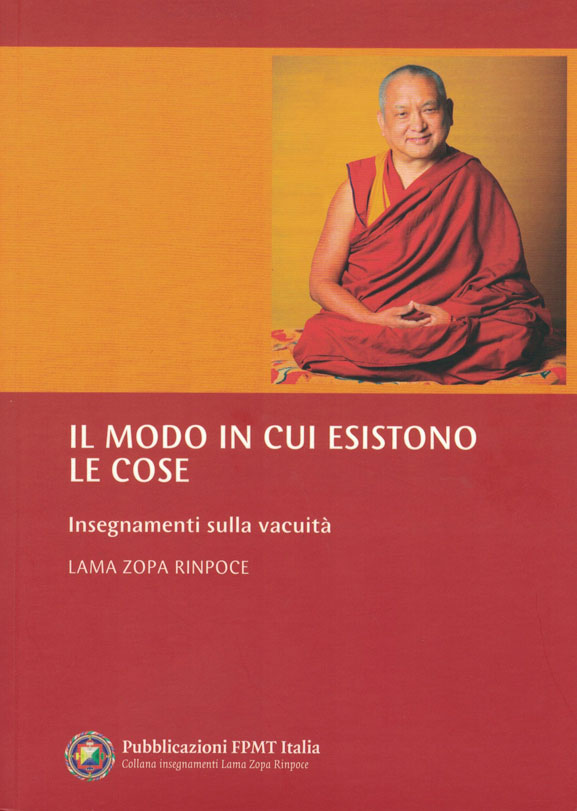 We are also pleased to announce a new Russian translation of Sun of Devotion, Stream of Blessings. Translated by Anastasia Stoliarova. This book is the record of a remarkable series of powerful and clear Dharma teachings given to students in Leeds and London, United Kingdom, in 2014.

We are grateful to work with so many amazing translators who make our publications and transcripts available in languages other than English. LYWA books have been translated into 16 languages and you can see a list of them all on our website. 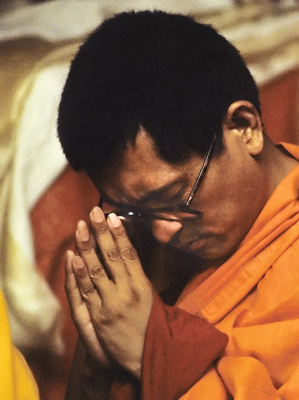 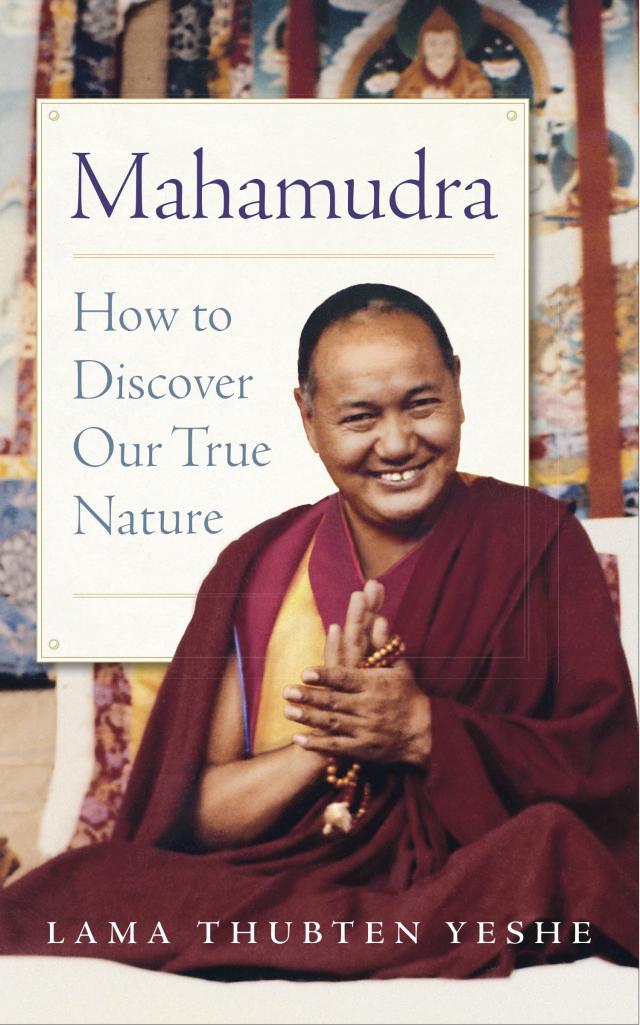 the teachings began at Kurukulla Center last weekend, Wisdom Publications director Daniel Aitken and board chairman Tim McNeill offered Rinpoche two of the latest books they've published: Mahamudra: How to Discover Our True Nature, by Lama Yeshe and The Four Noble Truths: A Guide to Everyday Life, by Lama Zopa Rinpoche, both of which were prepared for Wisdom by LYWA. If you are an LYWA Member, we will be happy to send these two books to you in print or ebook form. If you haven't heard about this from us, please send an email to jen@LamaYeshe.com and let her know which books you'd like to receive.
We are so grateful to all of you who support our work and in doing so are partners in bringing these precious teachings to everyone everywhere.
Much love,

THIS MONTH'S TEACHING: THE AUTHOR EXPLAINS HOW BIG LOVE CAME ABOUT 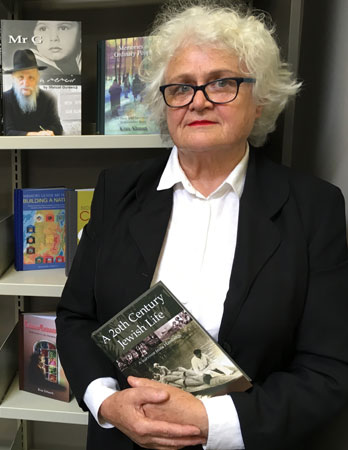 When Lama Yeshe left his body in March, 1984, his close students were devastated. As time went on and the centers Lama created and envisioned sprang up all around the world, his name was said less often. This is the nature of things. However, his closest disciple, Kyabje Lama Thubten Zopa Rinpoche, reveals his profound guru devotion every time he mentions “Lama.” Everyone knows “Lama” is Lama Yeshe. Rinpoche often hides his face when he mentions “Lama” because he is overcome. Every tiny detail Rinpoche reveals about his time with Lama Yeshe is a jewel beyond price. Rinpoche’s guru devotion is an inspiration and model for all his students and we are so grateful for his support of this book.

This story begins with the Chinese invasion of Tibet, which brought the ancient wisdom of the East to a generation of Westerners, of whom I was one. Lama Thubten Yeshe changed our lives. He taught us how to live, raise our children and die. He also introduced us to the unlimited potential of our mind and the value of being of service to others.

In 1976 Lama Yeshe called me to an interview and told me I was “a writer” and that I should write “for him.” At Lama’s request I immediately began editing one of his teachings.

While running a fashion import business for Lama Yeshe’s organization, The Foundation for the Preservation of the Mahayana Tradition (FPMT), I made a connection with The Age, Melbourne’s broadsheet daily newspaper at that time. In 1984 I was offered a column. This was my chance to write “for Lama” because you can say anything in a column. I wrote under a pseudonym and channeled Buddhist teachings through the work. The column ran for twenty-five years. Since 2000 I have worked for Makor Publishing at the Lamm Jewish Library of Australia. Melbourne is remarkable for its high percentage of concentration camp survivors and it is not surprising that Makor is the world’s largest publisher of Holocaust memoirs in English. These two vehicles provided my experience and training for Lama’s biography.

In 1992 Peter Kedge approached me with the idea to write Lama’s biography. Peter and Nicole Kedge provided funding for me to travel the world and interview hundreds of Lama’s colleagues and students. Initially, we thought the work would take eighteen months, which turned out to be eighteen years and then more than nine years preparing to publish. There was a time when the work was so overwhelming I had to stop seeing friends for three years and kept up my strength with one thousand days of precepts.

Peter was a constant backstop, inspiration and support throughout the whole time. As a founding member of FPMT, and having spent many years as Lama Yeshe’s attendant, his insights are invaluable and his dedication extraordinary. Peter and Nicole Kedge were also instrumental in developing the archive of Lama’s and Lama Zopa Rinpoche’s teachings. Today, under Nick Ribush’s masterful leadership of many years, this is Lama Yeshe Wisdom Archive, the publisher of this book. Lama Yeshe’s biography would not exist without Peter and Nicole Kedge.

I am not a scholar. I have simply tried to present as clearly as I can, and through the voices of those who were there, the story of this extraordinary man. I conducted hundreds of interviews and this manuscript was reduced from a body of material three times the size. It provides a record, to the best of our knowledge, of Lama Yeshe’s life—where he went, what he did and what he said. There is much about him that remains private to his Western students, such as his conversations in Tibetan and the brief times he spent alone. Sadly, nearly all his passports, traveling and personal papers were lost.

This book is not a nam thar, a particular Tibetan genre of spiritual biography, in that it does not record all the teachings and initiations Lama Yeshe received and taught. Lama Yeshe is an appropriate subject for nam thar, but the author would have to read, write and speak Tibetan, which I don’t.

“First time hospital, Kopan, Shanta Bhawan, English doctor there—Anila Ann knows. He said, ‘Even you have one million dollars you never fix up your body, you can’t.’ Then in 1974 something with Nick in Madison. Geshe Sopa pushed for examination. All doctors freaked out. I want time, date, all history. I saw one famous Australian doctor, Yeshe Khadro knows. Then next year back in Madison he does not know why I am not dead.

“What I did in Western world with Western people—all teachings, all business. Give Universal Education history, first with Max Mathews years ago, finally Connie Miller did.

“Give history on all meditation courses, how many people, how did, where did, strict retreat etc. How many people have great experience.”

Lama Yeshe’s place in the establishment of Tibetan Buddhism in the West is unique. As several of his peers have said, no other monk of the Gelug lineage besides His Holiness the Dalai Lama has done more to spread the profound teachings and practices of Tibetan Buddhism.

From Adele Hulse’s introduction to Big Love, forthcoming from LYWA, 2018.