Rinpoche asked for these comments to be passed on to a student who was working on a translation with him at the time. 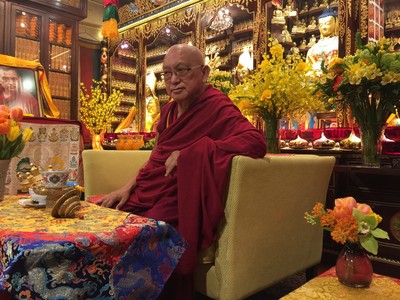 My dear one,
Regarding the word “mad” that you used to describe the elephant mind in the verses for encouragement, that is not the correct word to use.

Ordinary worldly people have what is commonly called a normal life, but there is some valid mind knowing what is harmful and what is helpful. There is some general knowledge of that.

There are also great yogis who behave as if they are totally crazy by acting totally opposite to ordinary people. They appear insane, but in reality it’s all done on the basis of realizations of guru devotion, renunciation, bodhicitta, and even the tantric generation stage (gross and subtle) and the completion stage, such as clear light and illusory body, and even higher than that, unification.

Choden Rinpoche mentioned one practitioner who, just before achieving enlightenment, was a butcher and cut worms or animals. There was also someone in a monastery who built a two or three story house but in the ordinary view there was no particular purpose for that.

Another example is Tilopa, who was already enlightened when he ate a live fish. This happened when Naropa went to look for Tilopa. Or the great yogi of Mahakala, Sharaipa, who lived in Bodhgaya in the Mahakala cemetery where there is a monastery built now. During the day he was like a hunter who killed deer, but in reality he was liberating them, sending their consciousness to the pure land. It looked like nonvirtue in the three actions of body and the four actions of the speech; it looked as if he was engaging in negative karma but in reality he was bringing great benefit for sentient beings.

Anyway, “mad” is not the correct word to use. It should be translated like this:

If the elephant of the mind
Is fastened tightly with the rope of remembrance,
All fears will become non-existent
And all virtues will come to one’s hand.
[A Guide to the Bodhisattva’s Way of Life, Ch. 5, v. 3]

This means all the happiness of this life and all the future lives, then ultimate happiness, liberation from the oceans of samsaric suffering and then great liberation, enlightenment. We don’t experience all this without a virtuous cause. That is why it says here that all virtues will come to one’s hand. Even this life’s happiness has to come from virtue. Happiness does not come from nonvirtue, which brings only suffering.

In the thirty-eighth chapter of the sutra known as Kon Tseg, Shakyamuni Buddha declared:

All phenomena like conditions
Extremely abide on the tip of wishes.
Whatever kind of prayer is made,
That kind of result will be received.

Keeping in mind what these masters have said, realize that your life is full of hope and that you can accomplish everything you wish.

Much love and prayers …