We hope you all had a happy and merit-filled Losar this month and we look forward to another great year of working together for the benefit of all.

New Lama Zopa Rinpoche Teachings Posted
We have added more excerpts from Lama Zopa Rinpoche's teachings in Singapore in 2013. The first is on Seeing How the I Exists, where Rinpoche explains how the I appears to exist from its own side, but it is merely imputed by the mind. 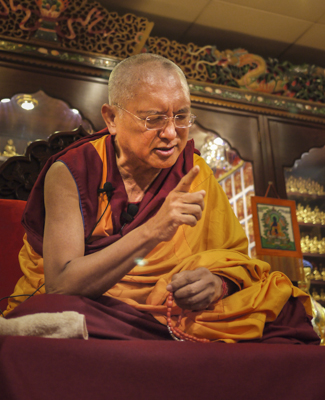 The second is The Path to Total Freedom, where Rinpoche reminds us that we all have the potential to be totally free from the suffering of samsara and its causes, delusion and karma:

We have also just posted a number of new excerpts from Rinpoche's amazing book on guru devotion, The Heart of the Path, edited by Ven Ailsa Cameron and drawing on nearly fifty different teachings on guru devotion that Rinpoche has given over the past three decades. You can read these excerpts freely online, order the paperback book from our website for $10 plus shipping or download the ebook version to just about any e-reader you may have; please see our online store for links. This great and important book was published in 2009 and is the first title in our growing FPMT Lineage series.

This month we posted updates to the beautiful advice on Raising Children with a Bodhicitta Motivation, given by Rinpoche during the 100 Million Mani Retreat at Institut Vajra Yogini in France in 2009. The advice was edited by Ven. Joan Nicell and also includes some additions from an explanation of the seven qualities in which to educate children, given by Rinpoche that same year at Root Institute, Bodhgaya, India.

New Advice from Lama Zopa Rinpoche
This month we have posted a letter that Rinpoche wrote to the nuns at Bigu Nunnery in Nepal. The nuns have been doing 100 million mani retreats every year since 2009, sponsored by Lama Zopa Rinpoche and FPMT. In this letter Rinpoche advises the nuns to do additional specific beneficial practices in conjunction with and to support their philosophical studies underway in the new nunnery educational institution.

Rinpoche gave extensive advice on karma in this letter to a student diagnosed with breast cancer. In this letter Rinpoche gives a detailed teaching on the nature of karma and on purifying karma in which he says: 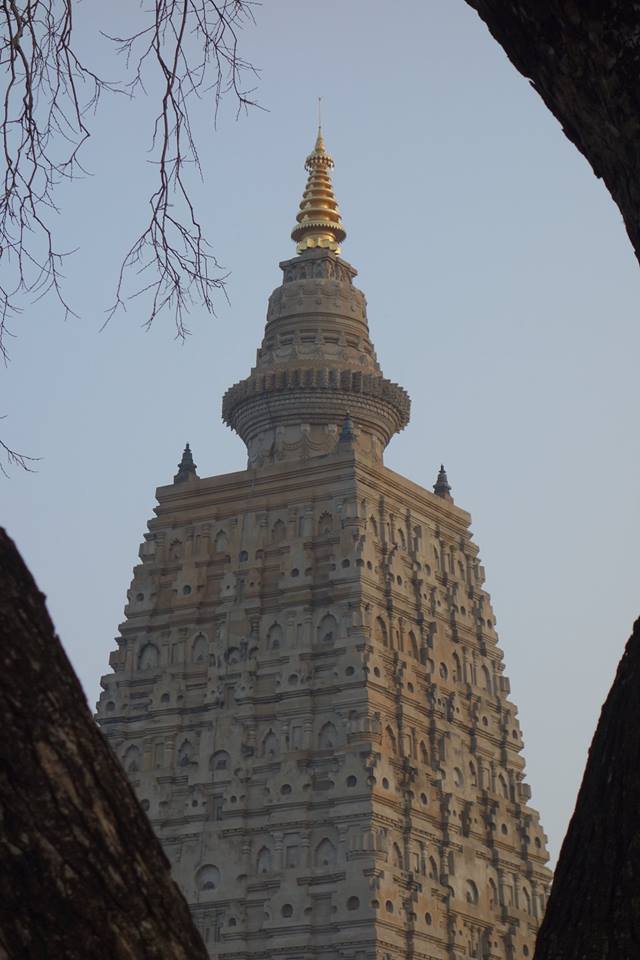 Rinpoche also gave precious advice--which he typed on his iPad--about rejoicing and using difficulties on the path, after hearing about devotees making a large offering of gold for the spire of the Mahabodhi temple in Bodhgaya, India.

Rinpoche gave some new detailed advice on the practice of guru devotion to a student that was encountering obstacles in his practice. We've included this new advice below as this month's eletter teaching and you can find the list of all Rinpoche's advices added in March here. 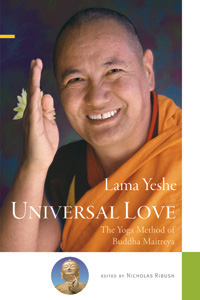 We have just made some new excerpts from Lama Yeshe's book on the yoga method of Buddha Maitreya, Universal Love, freely available. The new excerpts include an introduction to tantra and teachings on deity practice. You can also order a paperback copy of this fantastic book for $10 from our website, or download a copy to your e-reader; please see our online store for details.

And speaking of Buddha Maitreya, the current issue of Mandala Magazine offers extensive detail on the status of Rinpoche's Maitreya projects in Kushinagar and Bodhgaya. See the Mandala website to read the remarks Rinpoche offered at the foundation stone laying ceremony in Kushinagar in December 2013. Mandala also offers links to many other updates regarding these incredibly meritorious projects.

Be sure to visit our YouTube channel you can see the final installment in the 8-part series that we have been posting of Lama Yeshe's Thousand-Arm Chenrezig Commentary, organized by Vajrapani Institute at Grizzly Lodge, California in May 1980. 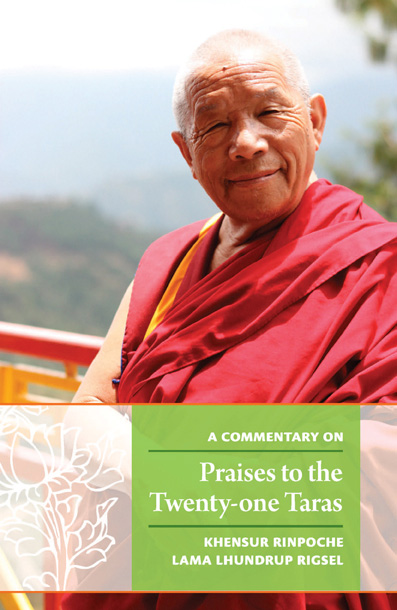 We have recently published the ebook version of A Commentary on Praises to the Twenty-one Taras by the late Khensur Rinpoche Lama Lhundrup Rigsel. This beautiful book was originally published by our friends at Amitabha Buddhist Center, and contains Lama Lhundrup's learned commentary on each of the Tara's aspects. Visit our online store to find links to purchase the ebook from Amazon and Smashwords for only 99 cents with links to more ebook vendors to come.

In 1985 the Meridian Trust was asked by His Holiness the Dalai Lama to help preserve Tibetan Buddhist philosophy, culture, art and practice. Based on this request the Trust has amassed a collection of over 2,500 hours of rare and unique video footage spanning the past 30 years, including extensive footage of His Holiness the Dalai Lama, Lama Yeshe, Lama Zopa Rinpoche, and many other great lineage lamas. Meridian Trust has launched a Kickstarter campaign to support their goal to develop a new public website that will make this collection freely accessible for the benefit of all. Please check out their Kickstarter video containing clips from this great video collection and support their efforts if you can.

Thank you so much for your support. You make it possible for the Archive to continue in its mission to bring benefit to all.

This Month's Teaching: The Guru Brings You to Enlightenment

A student offering service to the guru was having difficulties. Rinpoche gave the following advice about guru devotion.

Thank you very much for your kind letter. It’s very good you are being helped by Geshe-la. So, root guru is defined— for example, Lama Atisha had 152 gurus and Lama Serlingpa was the one who gave the complete teachings on bodhicitta. Lama Atisha took 12 months to go by boat to Indonesia, then he spent some years there and received the complete teachings on bodhicitta. It’s like there are two containers, one container is full of liquid that is put into another container. Lama Atisha said that among his 157 gurus, his root guru was Lama Serlingpa, because he brought the most benefit to his mind. When he heard Lama Serlingpa’s name, tears came and his hair stood up. He also had four other root gurus.

Generally, your root guru is the one who transforms your mind into Dharma, who helps that. The root guru is the one who benefits your mind the most, such as to generate bodhicitta, so the root guru is like that. The root guru may not even be generally very learned, he may even have only a little understanding of Dharma, but he benefits your mind the most. For example, even if the guru just explains a simple verse like “the I is empty” or something like that, it is so powerful. Even if only a few words are said, it is so powerful for you, to subdue your mind, and so beneficial. This also shows your past life connection—why even just a few words to you benefits so much, that is due to past life connection.

Once you have taken that person as your guru, which can happen by receiving just one verse of teaching or one lung like OM AH HUM, so after taking that lung or even one verse, one stanza, or receiving teachings on the basis of recognizing guru-disciple, then the connection is made. Then once the connection has been made, you have to look at the guru as a buddha, whether a new person or old person, whether showing many mistakes etc. Once you have made the Dharma connection, as guru-disciple, then you have to look at the guru as a manifestation of all the buddhas. Think that the guru is Tara, Vajrayogini, Shakyamuni Buddha, Yamantaka, Guhyasamaja, Heruka, all the buddhas, numberless buddhas, and think every action that the guru does with body, speech and mind—whether he scolds you or beats you—everything is all the actions of all the buddhas.

When the guru gives advice, then all the buddhas give advice, and when the guru gives teachings, that is all the buddhas’ action. So you have to always think that way and respect the guru that way. Then not just the guru, but every single atom of the holy body is numberless buddhas, even the hairs. When you serve the guru with that understanding, then serving the guru is unbelievable, unbelievable, unbelievable purification. This is always, not just on some days—when the guru shows he is not happy then the mind becomes dry, and when the guru shows he is happy, then you are happy. So not like that, it needs to be always. This guru devotion is the most important one, from where all the other realizations come. From the blessings of the guru, we receive all the realizations up to enlightenment—renunciation, bodhicitta, right view, and then generation and completion stage—the whole path is actualized.

Always, you have to know this, to be mindful. I hope my answer will cover most of your difficulties. Thank you very much. Please let me know anything, any difficulties, and I will try to answer.

If you have doubt in the guru, or anger or jealousy, if you keep your mind in that, then you will have so many heavy problems. The guru is the manifestation of all the buddhas, so all the past buddhas left you—they were unable to subdue you directly, so you were left out, like the bone from the food. When someone can’t chew a bone it is left out, so now the guru, who is the manifestation of numberless buddhas, picks you up and subdues your mind, so that you can be free from the oceans of samsaric sufferings. He brings you to full enlightenment, the peerless happiness, so that you can free the numberless sentient beings from the oceans of samsaric sufferings and bring them to full enlightenment. That is so kind, the most kind, most unbelievable, most unbelievably kind, wow, wow, wow, wow, wow, wow! With all kinds of methods, whatever fits, the guru brings you to enlightenment by teaching Dharma, by giving vows and initiations, by wrathful, scolding or peaceful means. So with all these different methods he brings you to enlightenment.

So the guru has manifested in ordinary aspect. All the buddhas have to manifest in ordinary aspect using ordinary means, showing mistakes; they have to show mistakes. Without anger but showing anger, without attachment but showing attachment, without ignorance but showing ignorance. So showing mistakes, but he has no mistakes. It is only through this that you can see—otherwise you can’t see the pure aspect, you can’t see that at the moment, you can only see the ordinary aspect, which can bring you to enlightenment, to be free from the oceans of samsaric sufferings and bring you to full enlightenment. That is for you; not for the guru, but for you.

So think about this. Thank you very much. I hope to see you soon. Please live the life as much as possible with a good heart and bodhicitta. Live the life for others.

Read other advices on this topic in Lama Zopa Rinpoche's Online Advice Book.