This book contains methods for transforming everyday actions into the cause of enlightenment, anger into patience, and the ordinary view of phenomena as inherently existent into the wisdom realizing emptiness.

Free audiobook on Google Play. You can also listen to the original recordings of these teachings by clicking on the audio icon for each chapter. 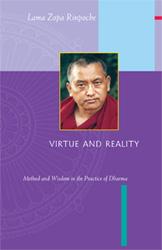 The entire Dharma, the teachings of the Buddha, can be divided into two categories—extensive method and profound wisdom. The method lineage passed from Shakyamuni Buddha to Maitreya and down through the great Indian pundits such as Asanga, Vasubandhu, Haribhadra and Suvarnadvipi to the great Atisha, who brought them to Tibet. Similarly, the wisdom lineage passed from the Buddha to Manjushri and again down to Atisha through pundits such as Nagarjuna and Chandrakirti.

In Tibet, Atisha arranged the Buddha’s teachings into a graded sequence that became known as the steps of the path to enlightenment (lam-rim), the essence of which is method and wisdom. Explicitly, this path has three principal aspects—renunciation, bodhicitta and right view. The Kadampa tradition, founded by Atisha, became the basis of the Gelug school of Tibetan Buddhism, which itself was founded in the fifteenth century by the enlightened scholar and yogi, Lama Je Tsongkhapa. This tradition lives today in the minds and teachings of great masters such as His Holiness the Dalai Lama and other wonderful teachers in the Gelug tradition, of whom Lama Thubten Zopa Rinpoche, the author of this book, is one of the best known. He is the spiritual director of the Foundation for the Preservation of the Mahayana Tradition (FPMT) and the guide, refuge and protector of thousands of students all over the world.

In the context of the teachings presented here, method is the loving, compassionate bodhicitta and wisdom is the realization of ultimate reality, the right view of emptiness. It would be hard to find a simpler, clearer, more practical explanation of these two fundamental paths than the one Lama Zopa offers us here. Through practicing method, we attain the holy body of a Buddha; through developing wisdom we attain the enlightened mind.

Based on a four-day course given at an American FPMT center, Tilopa Center, Decatur, Illinois, in August, 1997, the teachings presented here detail methods for developing compassion and wisdom in our everyday lives. Recognizing the workaday world reality in which most of his students live, Rinpoche shows us how to think and act so that every moment of our lives will be of maximum benefit to both ourselves and others. What more do we need?