Teachings by Lama Zopa Rinpoche prior to a refuge ceremony at Jamyang Buddhist Centre, London, November 6, 1992. Topics include the suffering nature of samsara, refuge practice and precepts. Click on the audio links to listen to the teachings and read along with the unedited transcripts.  Read more teachings on refuge by Lama Yeshe and Lama Zopa Rinpoche. 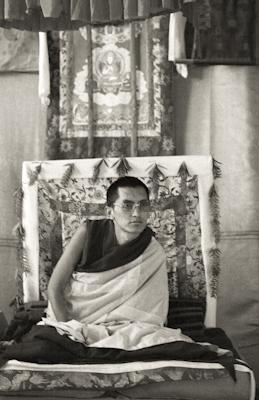 So therefore now, this time I have received a perfect human body, have met Dharma, the fundamental the four noble truths, true suffering, true cessation of suffering, the method to cut, the method which makes to achieve liberation, to cut the root of samsara, so I have met, have met Dharma, and I have met the virtuous teacher, showing the unmistaken path to the happiness, to liberation, to enlightenment. So this time, while I have all the opportunities, I must achieve enlightenment, that which is ever release, everlasting, ever release, free forever from samsara, so I must achieve this enlightenment. So for that reason, so now we're going to take refuge. So now take the refuge vows.

So this time I have received a perfect human body, I have met the Dharma, that which shows the fundamental path, cutting the root of samsara, liberating from all the whole entire sufferings, the true path, that which leads to the cessation of suffering, yeah. One has met this Buddhadharma, so one has met this Buddhadharma. So this time, so I must achieve full enlightenment, which is the state free forever from samsara, by taking refuge to Buddha as founder of refuge, Dharma as actual refuge, Sangha as helper to actualize the refuge. So by taking refuge to these three, then I'm going to take.

So prostrating like this to Buddha, mind thinking of Buddha, cause to achieve this quality of speech. Then this one infinite quality of Buddha's holy mind. It causes to achieve.

Until I become free from samsara, I will have to experience the suffering of samsara endlessly. So therefore, while I have all the opportunities by having received perfect human rebirth, have met the virtuous teacher, showing the unmistaken path to liberation, enlightenment. So this time I must receive full enlightenment, that which is free forever from samsara, for the sake of the sentient beings. So therefore I'm going to take the refuge vows. By relying upon Buddha as the founder of the refuge, and Dharma as the actual refuge, Sangha as helpers to actualize the actual refuge in my mind.

Then, with Buddha, what one should practice is even statue of Buddha, drawing [inaudible] then one think that is actual Buddha, by thinking actual Buddha then one put on a high, clean place. So this way yourself and other sentient beings don't create negative karma stepping over, throwing in the garbage, and so forth, they don't create negative karma.Then, by taking refuge to Dharma, what one should practice, what one should abandon that is giving harm other sentient beings. Then, by taking refuge to Dharma what one should practice is that Dharma books should not be put on the floor, on the bed, without some cloth, table or cloth, something, putting something. Cannot put just on the dirty place, dusty place, the floor. Then that obstacle to develop the mind in the path. Obstacle to meditation, to develop meditation, to have success. So one cannot step over Dharma books or sitting on that, together with cushions, so something that one sit on. So those become disrespect. And putting material, without any danger of wind blowing, if there's danger like this, then that's different reason, that doesn't become negative karma, if there's wind blowing or some other danger, then it's not negative karma by putting material on top. Then if there's danger like that, then to put glasses or material put on the top of the Dharma texts, so that is disrespect.

Even torn pages of Dharma text, missing, even a page, even on the floor or in the garbage, then, see actual Dharma which liberates me from samsara, which shows path that liberates me. Then put in a high clean place. So if there's so many and you have no place to keep it, then the last thing is on the roof or somewhere, clean place, then you burn, then you offer fire, so that this way, you and other sentient beings they don't create negative karma by stepping over it, throw in the garbage and so forth, like that.

Then by taking refuge in Sangha, what one should practice any ordained person yellow robe or red robe, to feel that this is my guide who liberate me from all the sufferings of samsara. Then respect, by thinking many of the practices, living in so many number of precepts, number of vows, and able to do many Dharma practices, so by remembering all these things, all these qualities then one respect. [inaudible]

Then what one should practice, also the robes, the lineage lamas of the graduated path to enlightenment, those who achieved enlightenment, so they, if they see piece of robe of the Sangha in the road, they put on the crown by remembering these qualities, then they put in a high clean place. Like that, they respect and they practice devotion. However, that one cannot step over the robes, like this, that which is used to cover the bed, all the robes, so not step over, and however, even there, but not stepping over, should respect.

Then what one should abandon is to not follow the wrong guide, who makes you to put this wrong view, wrong practices, then the Sangha cannot guide you.

Then the last thing, when we are in a situation danger to rise anger, emotional mind, so forth, so those emotional minds which give harm to oneself and other sentient beings, so [inaudible] so there are about, including the taking refuge there are about seven general practices. So this is Buddha's advice in our everyday life, anyway you go to bed, anyway you sleep, anyway you eat, so this is Buddha's advice, Buddha's skillful means for us in our everyday life how to make the life meaningful by the way, without much effort, like that, how to, by the way to create good karma, to create cause of enlightenment, because every offering that you do to Buddha, every single thing is cause of enlightenment, highest success, which means after you achieve enlightenment you will be able to bring every single being to enlightenment, so the result, the benefit is infinite. So like this.

So, then by having refuge, then you have the foundation all the vows, pratimoksha, bodhisattva, tantric vows, which is the path to achieve enlightenment. Then, all the negative karmas, by having refuge in the mind, by practicing refuge all the negative karmas accumulated from beginningless lives get purified. Then one accumulates infinite merit, extensive merit immediately by practicing refuge.

The Suffering Nature of Samsara
Refuge Practice and Precepts