As Buddhist parents, we have a special and very important responsibility to ensure that our children not only receive a good worldly education but are also educated to be good-hearted human beings. In this book, Lama Zopa Rinpoche explains how we can teach our children the good qualities and behavior that are essential for achieving every type of happiness, both short- and long-term.

These teachings were compiled and edited by Ven. Joan Nicell, and published in 2015 by Amitabha Buddhist Centre, Singapore. Now available as a free audiobook. 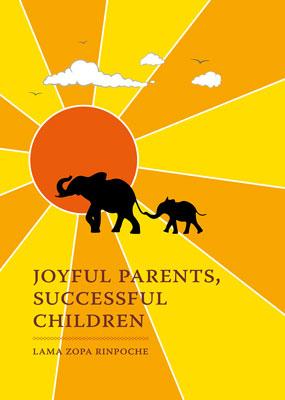 Parenting is one of the most challenging undertakings in life for which nothing quite prepares us. At the same time, nurturing, guiding and raising children can be deeply joyful and fulfilling.

As Buddhist parents, we have a special and very important responsibility to ensure that our offspring not only receive a good worldly education but are also educated to be good-hearted human beings.

This book contains perfect advice from Lama Zopa Rinpoche. It not only provides the Dharma context for how our children should be brought up but also contains many helpful suggestions of how we can introduce simple Dharma practices to our children.

In this little book, Kyabje Zopa Rinpoche speaks about the need for Buddhist parents to make a plan for raising their children. This plan involves giving meaning to the decision to bring children into the world, and after having given birth to them, ensuring that they do everything within their power to make their children’s lives as meaningful as possible. Otherwise, as Rinpoche says, “Being born in a Buddhist family will be no different from being born in a non-Buddhist family.”

Rinpoche then explains exactly how parents should go about doing this—by teaching their children how to generate a good heart and the Seven Foundations for Happiness and Peace (kindness, rejoicing, patience, forgiveness, apologizing, contentment and courage) and by guiding them in virtuous actions while they are still young.

The main body of the book comes from two talks given at Institut Vajra Yogini in Lavaur, France, on 15 and 23 May 2009 respectively. The context of these talks was a month-long retreat related to Avalokiteshvara (Chenrezig in Tibetan) who is revered as the embodiment of compassion.

Students present at the retreat, as well as those participating in the retreat from their homes around the world, were encouraged to count their recitations of the mantra OM MANI PADME HUM, with the aim of reaching a combined total of 100 million mantras. Almost every day of the retreat, Rinpoche would join one or more sessions and give an explanation of some part of the practice.

On one of these occasions, Rinpoche was inspired by the words “mother and father sentient beings” in the following request to Avalokiteshvara to talk about how Buddhist parents can best raise their children:

Arya Avalokiteshvara, treasure of compassion,
Together with your retinue, please pay attention to me.

Please quickly free me and all mother and father sentient beings
Of the six realms from the ocean of cyclic existence.
Please enable profound and extensive peerless bodhicitta
To quickly grow in our mindstreams.

With the water of your compassion, please quickly cleanse
Our delusions and actions accumulated since beginningless time,
And with your compassionate hand,
Lead me and all migrating beings to the blissful pure land.1

By keeping in mind that their child is one of the numberless sentient beings—for whom they, as Buddhists, develop bodhicitta at the beginning of every practice—parents can avoid raising their children with the painful mind of attachment that thinks only of my child. By understanding that they receive every happiness, past, present and future, up to enlightenment from their child, parents will be able to rejoice in their opportunity to be of use to at least one sentient being. As Rinpoche says, “Since you spend so many years of your life with your children, it is important to make them the focus of your Dharma practice and meditation.”

Just as parents can use their children to develop bodhicitta, so too can people use their partners, parents, other people in their care and even their pets, to develop this altruistic wish to achieve enlightenment.

In these talks, Rinpoche emphasizes the responsibility that Buddhist parents have to educate their children in good qualities and behavior while they are still young; that is, when they are still willing to listen and do what their parents ask them to! Parents should also set a good example and practice the qualities Rinpoche outlines as essential for achieving every type of happiness, both short- and long-term.

In addition, parents need to teach their children how to do simple Dharma practices like prostrating and giving offerings to holy objects. Even if children do not continue to do these practices when they grow older, because actions bring results, sooner or later, they will reap the results.

Rinpoche sums up his advice saying, “Since as Buddhist parents, you can do so much to help your children, it would be a great pity and also very sad and strange, if you don’t teach your children the things that you have faith in and have found to be of benefit to your own life.”

In this edition, the original compilation has been supplemented with material drawn from several other occasions during which Rinpoche elaborated on the Seven Foundations for Happiness and Peace:

Chapter seven of this edition has been compiled from a teaching given on 29 September 2014 during a one-month retreat in Bendigo, Australia, hosted by the Great Stupa of Universal Compassion, Atisha Centre and Thubten Shedrup Ling Monastery.

This book, as is the case for all things, is the result of the coming together of many causes and conditions. First of all, my deep, heartfelt and never-ending gratitude to Kyabje Zopa Rinpoche for his endless dedication to inspiring me and his many students around the world to transform every aspect of our lives—in this case raising children—into Dharma practice.

I would also like to thank Jon Landaw, editor and author, and Mariana Orozco Jutorán, Senior Lecturer for the Department of Translation and Interpreting at the Autonomous University in Barcelona, Spain, and avid supporter of Universal Education for Compassion and Wisdom, for reviewing my original compilation and making valuable suggestions about the content and structure. Many thanks to Ng Swee Kim of Amitabha Buddhist Centre in Singapore for asking me to review this text prior to publishing it, thereby giving me an opportunity to once again rejoice in these teachings. For this revised version, my gratitude goes to Ven. Ailsa Cameron, senior editor for LYWA, for reviewing and editing the manuscript and generously sharing her expertise in editing Rinpoche’s teachings. Thanks also to Sandra Smith, editor for LYWA, for reviewing the final version and offering valuable suggestions. And finally, hats off to Nicholas Ribush, intrepid editor, director and fundraiser for LYWA and the force behind making Kyabje Zopa Rinpoche’s prolific teachings readily and widely available online and in print.

May Rinpoche’s advice to parents cause them to transform their own lives and those of their children into a source of peace and happiness for all beings.