Lama Zopa Rinpoche explained the meaning and the benefits of reciting OM MANI PADME HUM, at these teachings in Singapore in January 1993. Karma and purification are also taught, and an oral transmission of the long Chenrezig mantra is included. 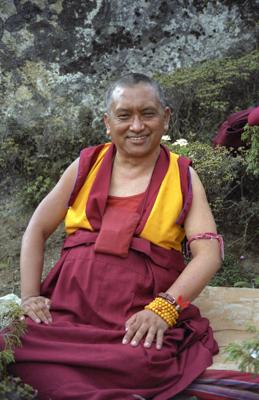 The Nature of Mind; Meeting the Guru

I’m very happy that this coming the beginning of this new year, that, this opportunity that to have some Dharma talk between us and to plant some seed not just, not just only to create, to have success and temporary happiness, not just only that, but to completely end the whole entire sufferings, death, rebirth, old age, sicknesses, the whole entire suffering, to completely cease, and to talk about methods of achieving this, Dharma, the unmistaken path taught by Buddha. Then specially peerless happiness, the full enlightenment, that which is the cessation of all the mistakes of the mind and completion of all the realizations. So to plant seed today by reciting mantra and by some talk, by chanting OM MANI PADME HUM and some talks about that, to plant seed of enlightenment, the peerless happiness, which makes us fully qualified to free every being who want happiness, who do not want suffering. Those who are devoid of happiness and who are suffering, to free them from all the undesirable sufferings and to lead in happiness, especially highest happiness, the full enlightenment, us to be fully qualified and to be able to do perfect work for all sentient beings, to make preparation, so that each other, that I have the opportunity to talk on these thing. However, for us to plant seed of this, I'm very happy to begin the new year with this.

So going to begin the discourse with, by taking refuge to our kind compassionate Buddha, Shakyamuni Buddha, who take care of us like father, mother, by revealing the right path to the peace, unbetraying, the path which has no cheating. From our side, from us sentient beings, from our side, if we practice correctly, definitely, without doubt, definitely we'll achieve the ultimate peace. We can achieve all the realizations of the steps to the path of enlightenment, even the highest, full enlightenment. The proof is that there has been numberless beings including Guru Shakyamuni Buddha that, that Guru Shakyamuni Buddha himself was like us, ordinary being before, who had all the problems, who had all the problems like us, has anger, selfish mind, dissatisfied mind, attachment, ignorance, so forth, jealous mind, pride, doubt, so forth, having all these problems. But, because the nature of the mind is pure in the sense that it’s not oneness with the anger, ignorance, attachment, all the mistakes, the mistakes and problem is temporary, it’s not forever.

So Buddha, therefore Buddha he changed his mind, from the thinking of oneself, cherishing oneself, into cherishing others. Instead of concern of oneself, change it into the concern of others, other sentient beings. So because of that, Buddha became, even though we were same before, but Buddha became enlightened much earlier, became free of the whole entire suffering of samsara and achieved peerless happiness, full enlightenment much earlier; and similar, achieved enlightenment by following the right path correctly as Buddha was taught by other Buddhas, his gurus. So after that numberless other beings who correctly practiced what Buddha, the unmistaken path to the peace, to the highest enlightenment, what was taught by the Buddha, those who correctly practiced, then also, so many from centuries, centuries, there happened many enlightened beings after Buddha taught Dharma, from not only India, from many other countries, there happened many enlightened beings. So even nowadays in different countries, there are meditators, there are lay and ordained persons who are correctly practicing, they are attaining the path, there are many who have attained very high level of path. They even, those very high bodhisattva path, very high the Mahayana, the Vajrayana path, there are many, there are lay and also ordained.

So same thing, us, we also have mind that, same mind that which nature is pure in the sense that it’s not oneness with mistakes, with the anger, ignorance, attachment and so forth. That, that which is the essence of our mind, clear light, that which is clear light, and that is the Buddha nature. That mind is, what is mind? Mind is dependent arising, depending on causes and conditions, it exists. So, so therefore, for example, the mind, this present our mind caused by previous our mind. Today's mind is caused by yesterday's mind. So there is cause, conditions like this, and also the mind, what is mind? It is nothing except what is merely imputed by the thought, mind, what is merely imputed by the thought, depending the reason, the base, the phenomena on that which is, that which is formless, colorless, shapeless, which nature is clear, perceiving object.

So therefore, now you can see, there is no such real mind as it appears to us, in the sense existing from its own side. So that one is completely empty right there from where it is appear, the real mind what it is appearing to us is empty right there. So this is ultimate nature of the mind and this is clear light, this is what is called clear light, and this is what is called Buddha nature.

So the obscurations, the problems that we have in life, that we think, which appears to us like permanent, like something real, something permanent. It's not like that, it’s temporary, like the fogginess in space.

So for example, when we ring the gong, so until the stick beats the gong there’s no sound, it doesn't produce sound. But when the gong meets the stick, the condition of the stick then the gong, because the gong has the potential to produce sound, the potential is there, so by meeting the stick, then the sound comes from the gong. So like this, by meeting the condition, the virtuous friend, the spiritual master, the virtuous friend, who shows the unmistaken path to the full enlightenment, to the ultimate happiness, to the happiness, especially to the ultimate happiness, specially the highest, the enlightenment. So by meeting the condition, the virtuous friend, the spiritual master who shows the unmistaken path to happiness, then the spiritual master reveals the graduated path of the lower capable being, that which contains refuge, karma, abandoning the cause of the lower realms, the negative karma which causes the lower realms, such as the ten non-virtuous actions. Then, teaching the shortcomings of the ten non-virtuous actions, teaching the benefits of the ten morality or the ten virtuous actions. So then one achieve the temporary happiness of future lives, deva, human body, so forth, wealth, so forth.

And then by revealing the graduated path of the lower capable being, the four noble truth, then one, by actualizing, realizing these things, then one achieve the cessation of the whole entire suffering and causes, the ultimate happiness.

Then, the virtuous friend, by revealing the graduated path of the higher capable being, the bodhicitta, the six paramitas, then Vajrayana path, these things, then one achieve the cessation of mistakes of all the mind and completion of the realizations, the full enlightenment. So, by meeting the, by gathering the conditions, from our side, if we make to gather the cause and conditions, like this, then all the success comes, even the highest, highest to achieve enlightenment, and then able to bring, able to free every sentient being from all the sufferings and lead to enlightenment. So we have complete freedom whether we want to be free from suffering or, it is in our own hands.So, the stick that which rings gong, the stick that which hits the gong, by meeting that, the sound comes, so that our meeting the spiritual friend, spiritual master, who reveals the right path, that is like the stick that meets the gong. Then producing sounds, by meeting the stick with the gong then producing sound then, then by meeting the virtuous friend, the spiritual master, who reveals the right path to the happiness, so then the teaching that is taught, then doing the listening, reflecting and meditation practice, then achieving realization, that is like the sound, producing sound, then achieving realization of the path, including enlightenment, so that is like the sound coming from the gong. So because the gong already has the power, it just need to meet the conditions. So here the power in our mind, the potential is there, then by meeting outside condition, the guru, then by practicing the teaching, then all the realization up to enlightenment comes. So that's how we accomplish all the works for oneself, all the works for all sentient beings.

So first going to recite by taking refuge to the kind Compassion Buddha, then recite some mantra.

[Praise of Shakyamuni Buddha and other prayers; short mandala; refuge and bodhicitta]