Lama Zopa Rinpoche gave these teachings at the 29th Kopan Meditation Course held at Kopan Monastery, Nepal, in 1996. These excerpts include teachings on patience, bodhicitta, and reincarnation, and a question and answer session.

Click on the audio links to listen to the teachings and read along with the transcripts. 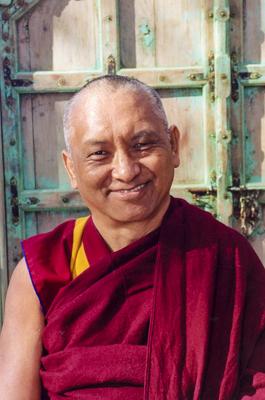 The Kindness of the Enemy

So this time maybe mention little bit about reincarnation, going back from where it started, back to the beginning of the life. Of course, even one doesn’t understand or believe in reincarnation, but still you need to practice good heart, still one need to practice Dharma even you don't believe in reincarnation, need to practice good heart, compassion, loving kindness towards others, because if one doesn’t do that you cannot be happy, cannot make others happy. So therefore whether you believe in reincarnation or not everyone likes happiness and doesn’t want suffering, so still need to practice Dharma, tolerance, patience. If one does not practice tolerance, if one always lives the life with impatience and follows anger then you can never have peace and happiness in your life. Then how much externally, as I mentioned one morning as motivation for the eight Mahayana precepts, even if externally there is a lot of success, whatever one can get in this world, there is no happiness in the life, your inner life becomes miserable, unhappy, there is no light in your inner life. No matter how much comfort or enjoyment, whatever one can get in this world, even one has achieved but one cannot enjoy the life because there is no inner peace and happiness, no good heart, no contentment, no satisfaction, so therefore you cannot enjoy the life. So whether one understands, believes in reincarnation or not, one needs to practice Dharma, good heart, stop giving harm to others.

So this is without talking past and future lives and past and future karma, even in this life it is like this. Whether one believes in karma or not this is how it is; life is dependent arising. Happiness is dependent arising. Unhappiness, problem, is dependent arising. By depending on another cause and conditions, problem rises, one encounters problems and then depending on another cause and conditions one experiences happiness. So in reality one n eeds to practice Dharma whether one understands reincarnation and karma or not, but this is the nature. Depending on what kind of action one does, then one experiences the result happiness or problems, depending on what kind of attitude one generates, negative thought or positive thought.

So if one practices patience then even the enemy will become friend, if one practices patience, loving kindness and compassion. That will make enemy become friend. If one practices anger, doesn’t practice good heart, if one just follows the ego, anger, dissatisfied mind, desire, even the friend will become enemy. Sooner or later it makes the friend to think, "Oh, I have had enough". It makes the friend think that they have had enough of him or her. Then it is time to say good bye. So sooner or later the friend becomes enemy, turns out to you as enemy. The other way, if one practices tolerance, good heart, compassion, loving kindness towards others, then even the enemy becomes friend to you. So I don't remember exactly but one story happened in Australia recently. One person’s, one family’s car was parked outside and the neighbor made mark on the car, scratched the car more and more, again and again. So what happened? It was Sydney. So there was...

...so who owned the car didn't know what to do so there was a meeting. One student, Renata, who is psychotherapist, she had a discussion, she had a consultation at her house and this person asked, "What would the Buddhist do? How would they respond to this situation?”

So Renata, the one who holds the meeting, she asked George Farley, one old, one of the board members of the organization. He is the main person who arranged His Holiness the Dalai Lama’s tour in Australia, all of them, very first one, the second one, which was extremely successful, probably the largest gathering of Western audience, in the West, in Melbourne, second one, then third one, the recent, Sydney and Melbourne and then Canberra, and Kalachakra initiation in Sydney, which had about 4000 people. There were supposed to be more at the lam-rim teachings before the initiation, but it turned out that there were more at the initiation and less for the beginning. The aim is not the initiation itself. The aim from His Holiness’s side, the reason why the Kalachakra initiation done many places, so many times by this present incarnation of His Holiness the Dalai Lama, that main reason is that, the initiation is not the main one, the main aim is the lam-rim teachings, renunciation, bodhicitta, emptiness, those teachings on how to live the life, those practical advice, which are useful to everyone. So that is the main aim, to subdue the mind, to make the mind soft, to have less ego, less anger, less dissatisfied mind, desire so forth and that way to bring more peace and happiness in the mind of the people, that’s the way to bring more and more peace in the world and less and less violence. So that is the main aim of His Holiness the Dalai Lama, even if from the side of the people the main attraction is the Kalachakra, but from the side of His Holiness the Dalai Lama the main thing is the talk before the initiation, the lam-rim teachings, the Dharma advice.

So maybe ten years ago when I was doing a course outside of Melbourne at Anglesea, during that time George was there. It wasn’t his first course. His first course was here at Kopan when it was in the old place on the other side, under the thin sheet and bamboo, like a cave. So one day I called him in the room and gave him a banana and asked him if he could invite His Holiness the Dalai Lama to Australia. It would be highly beneficial if he could arrange with some wealthy people, to arrange the tour, sponsor, with some wealthy people. So he did that. His Holiness the Dalai Lama at that time hadn't received Nobel Peace Prize and gave a talk at Melbourne University and whatever was arranged went extremely well, great benefit. Then the second tour was done recently, 1992. So that he planned out, he was the main person, the leader who made the planning, even though there are many people who work he was the main person who made the plan and it was extremely successful, the public received great benefit to their mind. Then this most recent time unbelievable benefit to many hundred thousands of people. This time also he was the main person who arranged the tour, organized.

So Renata consulted with George because when this person asked that question she didn't know what to say. So George just made the story up that if somebody did something like that to Lama Zopa then he would thank, he would give present to the person. He just made it up. Unfortunately—I wish I did like that.

Definitely when you do practice kindness of the enemy, when you remember kindness of the enemy, for example by thinking that what I do is always follow the ego, but this enemy what he is doing to me he is helping me to destroy my ego, he is being against, he is acting against my ego. Myself always being friend to the ego, which means then always opening the door to the problems, always producing problems, inviting problems, always creating problems; following the ego means that. So I always do this, but this person is being against to my enemy, ego, my enemy or the demon, ego. That which never allowed to have realization of the path to enlightenment in my mind, who always makes to arise all the negative thoughts, the emotional disturbing thoughts, who harms, tortures me and harms to others all the time, obliging me to create negative karma, to fall down, to reincarnate and suffer for unimaginable number of eons in the lower realms and always obliges me to give harm to others. Not allowing me to practice Dharma, the cause of happiness, never giving me any peace, any rest to my mind, in my heart, rest to my life, peace. Then by letting to arise all these disturbing emotional thoughts it obliges me to experience, due to ego these disturbing emotional thoughts arise then creates relationship problems, problems at home, problems outside with the people, so create the cause of sicknesses, disease, all the problems, problems in the job, all the life problems, loneliness, depression, upsetness, guilt, all the things. So who obliges me to experience all this is the ego.

So this is what I often do myself, therefore the ego is the real enemy, the main enemy, so what this person is doing is being against my enemy the ego and this person is helping me together to destroy my ego. So in other words what this person is actually doing is not harming, but is helping me. How? Because what this person does is against my ego. I become friend, slave of my ego which gives me all the problems. So that is why still the problem is not stopped, experiencing the suffering is not stopped. From the beginningless rebirth, even the continuation of consciousness has no beginning, in other words if the continuation of consciousness does not have beginning then the life suffering should have been stopped a long time ago because the continuation of consciousness has no beginning, so the suffering should have stopped. But it didn't stop, still continuing. That is because I didn't stop following the ego, I didn’t stop the ego, I didn't let go of the I.

Benefits of Bodhicitta »
+ View All Teachings