Teachings on the Heart Sutra

You can view excerpts from the teachings on our YouTube channel in a series of 22 videos, commencing with Rinpoche Surveys the Scene. 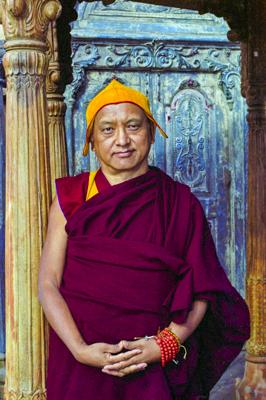 How We Hold Onto the I

What I was trying to say before is that [the transformation of the mind is very easy] when our mind is ready, with all these necessary conditions gathered—strong guru devotion and strong practice of purification and collecting extensive merits, all these things happening. Also if there’s the imprint left from the past; the imprint left by listening to or meditating on teachings on emptiness, by reflecting and by meditating, so the imprint is there.

Then words like those of Pabongka Dechen Nyingpo, for example, in the notes on Lama Tsongkhapa’s teaching, Praise to Guru Shakyamuni Buddha, having realized the unification of emptiness and dependent arising, and having revealed and taught dependent arising to us, having revealed this teaching with his experience to us sentient beings. So, for example, two words, as Pabongka Dechen Nyingpo explained, I on the I. There’s I on the I, or vase on the vase. It looks like it doesn’t make sense, “vase on the vase,” or “I on the I.” It looks like it doesn’t make sense when you hear that or when you read it. Immediately it looks like it doesn’t make sense, but it has great meaning, it’s what is called the red commentary. It’s an expression of the object to be refuted or the false object, by Pabongka Dechen Nyingpo from his own experiences, from his own realization.

Then you look at the ceiling, same, there’s a real ceiling from there. There’s a ceiling appearing from there. You have this view that has been always from beginningless rebirth, this view has been there all the time but you didn’t recognize it. So suddenly here you wake up, with these conditions, your mental state like this, with these conditions of practice, then it’s like suddenly it clicks, the mind, in these points, now recognizing these things. Suddenly you recognize these things.

Then you look at the I. Then you look at that, on your I, then you see the I on the I, that. Again, it is always there. The I has been appearing to you always that way, independent, not merely labeled by mind. Independent, inherently existent, not merely labeled by mind, always it’s been appearing that way, but somehow, twenty-four hours we think of I and we apprehend it is true. I think maybe because we have been apprehending that is true, so that blocked to recognize the false I. So believing it’s true, that has been blocking to see the [false I.] We have been believing the false I as real I.

I on the I, the real I appearing from there, which is a hallucination, which is false, but because so far believing that it’s true, so that blocked to see, to recognize the false I, the I that which doesn’t exist and because not recognizing that, then that blocks to see that is empty, it blocks to see that is totally empty. So then realizing the emptiness of the I doesn’t happen, then we are unable to cut the root of samsara, the ignorance, the root of all the delusion, karma, all the samsara, so we are unable to cut, eliminate that ignorance. Because of that, from beginningless rebirth up to now we have been suffering. We die and are reborn, we die and are reborn, and we are experiencing all the sufferings in-between.

Now, opposite to that, now what we have to do is opposite to that, the mistake. Now, the absence of the cover, the merely labeled, the I what exists is the merely labeled one, but it’s a cover. Inherent existence is a cover, like the brocade cover on the table, like carpets covering the floor, there’s a cover on that. We put a cover, our mind puts a projection, a hallucination, that which is inherent existence, inherently existent appearance. Our mind decorates or puts, projects a hallucination, the inherently existent appearance, on the merely labeled I.

So however, now, that. So you see the I on the I, then suddenly, “Oh, this is what the texts talk about, the object to be refuted.” Suddenly, due to strong devotion and purifying the obstacles, negative karmas and collecting extensive merits, suddenly it clicks in your mind, to recognize that. Then you use, even though there are so many logics, reasons to use, however, even simple things like that, that this is dependent arising, so without losing the object of your concentration, without losing that, as you are seeing the I on the I, or the real I appearing to you from its own side, so while you’re focusing, while you’re one-pointedly focusing on that, that which you have recognized as the object to be refuted, so suddenly you [think] with surprise, “Oh, this is what it called, what is mentioned this object to be. This is the one, that object to be refuted.” Then while you’re focusing, while you’re focused on that, without losing that, now you found, like you have found your enemy who always has been bothering you, who has been harming you, from the time without beginning who has been harming you. Now suddenly you recognize, suddenly you found it, you recognize it. It’s always there with you, but you haven’t recognized it. Now, this time, suddenly you recognize it.

Then that time, as I mentioned, because of all these conditions gathered, strong devotion to the guru and the strong practice of purifying, collecting merit, receiving blessings, so with all that, then suddenly the real I appearing from there cannot stay. It can’t stay, no choice, no freedom, no choice. Suddenly you lose that—not lose like we lose money, not lose like we lose money from a purse and it goes somewhere else, not like losing material where it goes somewhere else, not like that. But, losing that, not going somewhere else, but losing just there, from where it is appeared, the I from where it is appearing, it’s losing that there.

So you see now, the whole life, now when we think, when we examine like this, the whole life becomes very strange, totally, it doesn’t make sense. It doesn’t make sense. It’s like you have been believing the dream as true. Whatever was happening in the dream you have been believing true, and then worried. So much worry and fear that your children died in your dream, you got married and got children and they died, and then so much worried, then many wrinkles came in the body and many white hairs. In the dream so many problems happened, your house got burned by fire and so many problems happened in the dream, then by believing this is real then you got so much fear and worry. So it’s like that. So it’s like that, exactly, exactly the same as the dream story, by believing it’s real then all the fear, worries, all these concerns.

Meditation on Emptiness »
+ View All Teachings

Teachings on the Heart Sutra