The Heart of the Path

In this book, Lama Zopa Rinpoche explains the importance of the spiritual teacher and advises how to train the mind in guru devotion, the root of the path to enlightenment. Edited by LYWA senior editor, Ven. Ailsa Cameron, this is a fantastic teaching on guru devotion and is a great and very important book. 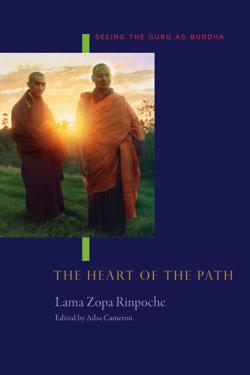 Yangsi Rinpoche has also said, "Usually, when we talk of perfect examples of demonstrating pure guru devotion, we talk of Milarepa, Marpa, Tilopa and Naropa. But in our generation, the quality of Lama Zopa Rinpoche's guru devotion is a perfect example. When we reflect on the kindness of spiritual teachers, in addition to reflecting upon the historical teachers and their great activities, we can also think of the great teachers of today, whose lives are totally dedicated to the service of the Dharma."

Rinpoche himself, of course, denies any accomplishment of guru devotion: "Even though I cannot find any guru devotion anywhere within my body, from my head down to my feet, I will just imitate what Pabongka Dechen Nyingpo and other lamas say in the lam-rim when they talk about how they practiced the root of the path to enlightenment." During the fifty years that Rinpoche has been teaching Dharma to Westerners, he has taught extensively on the subject of guru devotion. Most of these teachings have been transcribed and more than fifty of them, given between 1979 and 2005, are the source material for The Heart of the Path.

Rinpoche himself recommended as important to be included in this book the teachings on guru devotion he gave during a commentary on Lama Tsongkhapa Guru Yoga at Jinsiu Farlin, the FPMT center in Taipei, Taiwan, in June 1996. While these teachings are the nucleus of the book, in addition, other major sources for this book were commentaries on Lama Tsongkhapa Guru Yoga given at Tushita Retreat Centre, India, in 1986; at Vajrapani Institute, California, in 1988; at Chenrezig Institute, Australia, and Cham Tse Ling, Hong Kong, in 1989; in Sydney, Australia, in 1990; and at Istituto Lama Tsongkhapa, Italy, in 2004. Also included is material from mahamudra commentaries given at Chenrezig Institute in 1980; at Vajrapani Institute and Vajrayogini Institute, France, in 1981; and in Adelaide in 2004. Other major sources are a Lama Chöpa [Skt: Guru Puja] commentary at Mahamudra Centre, New Zealand, in 1985; a Six-Session Guru Yoga commentary at Katoomba, Australia, in 1991; a Vajrayogini commentary at Mahamudra Centre in 1994; a Most Secret Hayagriva initiation in Sydney in 2000; Kadampa teachings at Root Institute, India, in 2003; and general teachings at Dorje Chang Institute, New Zealand, in 2004. Valuable material was also used from Rinpoche's translation of and commentary to The Essence of Nectar at Kopan Monastery, Nepal, in 1982–83. In addition, material was drawn from the transcripts of more than thirty minor teachings.

Since Rinpoche has praised Liberation in the Palm of Your Hand as an experiential commentary that presents the teachings in a simple and clear way, the structure of The Heart of the Path closely follows that of Liberation. Chapter 1, Why Do We Need a Guru?, explains why guru devotion is the root of the path to enlightenment. Chapter 2, The Power of the Guru, while given only a passing mention by Pabongka Rinpoche in the first of the eight benefits of correct devotion, is featured as a separate chapter here as it was emphasized by Rinpoche in his teachings and explains the potential for incredible benefit and danger in relation to the guru. Chapter 3, Checking the Guru, again unlike in Liberation, is a separate chapter because of the crucial importance of being careful in choosing the person who is to become the most powerful and important in our life. In Liberation, the qualities of a guru and a disciple, chapters 4 and 5, are discussed between the disadvantages of incorrect devotion to a guru and devoting with thought; here these topics follow the chapter on checking the guru. In chapter 6, Who to Regard as Guru, Rinpoche tells stories from his own childhood to illustrate this issue and goes on to answer many questions commonly asked on this topic.

The third, and most important, guru devotion outline, how to devote to a guru with thought, which means seeing the guru as a buddha, is covered in depth in the following six chapters. Chapter 9 emphasizes the importance of faith. In chapter 10, Why We Should Look at the Guru as a Buddha, the point is made simply and clearly that we practice guru devotion for our own benefit, or profit, not for that of the guru. Chapter 11 explains that it is possible for us to see the guru as a buddha, just as it is possible to see ourselves in a positive way, and also explains how to use any faults we see to enhance our devotion. In chapter 12, with many quotations and lines of reasoning, Rinpoche details various techniques and meditations we can use to train our mind to see the guru as a buddha. The techniques are summarized in chapter 13 in the form of a debate with the superstitious mind that refuses to see the guru as a buddha. Finally, in chapter 14, the guru's kindness is discussed.

The fourth major outline is explained in chapter 15, Devoting to the Guru with Action. In chapters 16 through 18, Rinpoche discusses whether it is necessary to do absolutely everything that the guru tells us to do, and then describes the exceptional cases of Tilopa and Naropa and Milarepa and Marpa.

In chapter 19, Rinpoche describes in more detail the tantric practice of guru yoga, in which the guru is seen as a buddha not only in essence but even in aspect, and illustrates the practice in relation to Six-Session Guru Yoga and Pabongka Dechen Nyingpo's own powerful prayer Calling the Lama from Afar.

In chapter 22, Rinpoche gives some general advice in relation to teaching and studying guru devotion.

In chapter 23, Rinpoche gives guidelines on how to go about achieving the realization of guru devotion and how to know when we have achieved it.

The book concludes, in chapter 24, with some dedications related to the practice of guru devotion that Rinpoche commonly uses to dedicate merits.

As with Pabongka Rinpoche's style in Liberation in the Palm of Your Hand, the general style in this book is informal, with many stories. While there are also a lot of quotations, they should be regarded more as paraphrases than word-for-word translations, especially as many were done from memory rather than directly from a text.

I would also like to thank all the many people involved in the recording, archiving and preserving of Rinpoche's teachings, including all the people working in FPMT centers who arranged and recorded these teachings and especially Nick Ribush and everyone else involved in the Lama Yeshe Wisdom Archive.

Heartfelt thanks also to Claire Atkins and Ven. Lhagsam for generously providing me with the material conditions conducive to editing this book.

Finally, from my heart, I would like to thank Lama Zopa Rinpoche for his infinite generosity, compassion, patience and wisdom in tirelessly and constantly teaching Dharma around the world. In particular, I would like to thank him for compassionately giving the many inspiring teachings included in The Heart of the Path. Any merit created in the process of producing this book is dedicated to Rinpoche's long life and good health and to the success of his many activities to benefit sentient beings and the teachings of Buddha. While Rinpoche's kindness is a debt that I could never repay in this and many other lifetimes, my editing of this book is a small effort toward repaying that kindness.

Notes:
1. A comment made during a long-life puja offered to His Holiness by FPMT in December 2006 in Sarnath, India. []

2. Yangsi Rinpoche, the incarnation of Geshe Ngawang Gendun, one of Lama Yeshe's gurus, is the director of Maitripa College in Portland, Oregon. []

7. The work is Abbreviated Notes from Explanatory Discourses Given on [the First Panchen Lama's] Six-Session Guru Yoga, [Chandragomin's] Twenty [Stanzas on the Bodhisattva] Vows, [Ashvaghosha's] Fifty Stanzas on the Guru, and the Root and Secondary Tantric Vows. []

8. For the precise sourcing of the quotations from Pabongka Rinpoche's Liberation, see Liberation in Our Hands, Part Two.[]