These extracts are from a series of teachings prior to a chöd initiation given by Kyabje Lama Zopa Rinpoche at Maitripa College, Portland, Oregon, in June 2009.

Listen to the audio files and read along with the unedited transcripts. 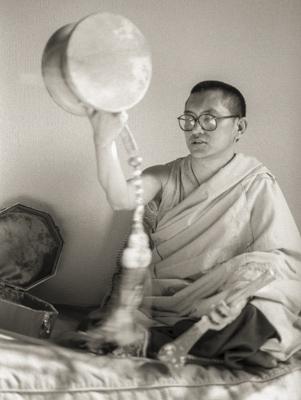 Then the, then having breakfast, and then, probably, maybe have made offerings, maybe have made quick offerings, one second offering, one second or half-second offering, anyway, I’m joking. Maybe some quick offering, or maybe just recite the prayers, just recite the prayers, maybe even didn’t think offering, maybe didn’t think offer, but maybe just recite the prayers. Or, you see, maybe you did make offering, but then, but the motivation of eating, so there was no bodhicitta, there was no renunciation, ?except especially empty, it’s very rare, you know that’s, so, yeah, so that’s just, just become, just happiness of one’s own life, this life, so just worldly concern and just become pure non-virtue, so like that.

So, however, and then, so, so what was done is rush for that, but not actual the motivation, say, to make the action many hours doing job, many hours of doing job or study, that day, and, so, didn’t have the motivation which transforms those actions become Dharma it’s not there, didn’t happen, that didn’t get done. So like that.

Then, you see, having lunch, having dinner, all the eating, all those activities, again, so did not become Dharma, there’s no Dharma motivation, even for, even renunciation, or happiness for oneself is not there, the liberation from samsara, or happiness of future lives, only the happiness of this life. So like that.

So, like that, so, whatever the activity, it was done, so maybe, then, maybe when you do sadhana, beginning there’s a motivation of bodhicitta, so, and sometimes even that becomes just words, there’s no real feeling in your heart, so you’re reciting it, so it just becomes recitation, but not, not feeling, the feeling is not there. So, then, just only recitation doesn’t become the action, even doing sadhana become Dharma, so it only becomes recitation, this feeling not there. So like that.

So anyway, so just a rough idea, even, even we believe I’m a Dharma practitioner, and I, practicing Dharma for a long time, for many years, but in reality like this, if one examines. So, I’m not saying everybody, but I’m saying, just like myself, like many others, like that. So, if you really examine, it’s like that, very little in the daily life that becomes Dharma, real Dharma, pure Dharma.

So there may be circumambulation, prostrations, offerings to the holy objects, and the statues, stupas, scriptures, so then by power of the, not from your motivation, but from the power of the holy object, then those actions become Dharma, so sometimes those things can happen, so like that.

And then, then, even we try to collect merit, with so much effort, with so much effort, by putting all the effort, trying to practice Dharma, trying to collect merit, trying to make the action virtue, either there’s no motivation of bodhicitta, or there’s no dedication after that, like that, dedication is missing. Then, as I mentioned before, even the dedication is there, but not done well, didn’t dedicate to achieve enlightenment for sentient beings, or didn’t get to seal with emptiness, so like that. Then later, heresy, anger, rises, even it’s dedicated, no question if it’s not dedicated to achieve enlightenment, but even dedicated but still, heresy, anger can make the merits weaker. So like that, you see, if it’s not sealed with emptiness, so like that. Then there’s heresy, anger, ill will, there’s so many of these negative thoughts which harms the merits, makes weaker or destroys the merits, so there are many of these negative thoughts, like that.

So, but non-virtuous thought, there’s the motivation, so much in our life, non-virtuous action we create, has a very strong motivation, and also many of the, what we succeed, then rejoice, happy at the end, so that makes the negative actions very powerful, like that.

Only when we have, only we have pure karma, only when our defilements become thinner, purified, thinner, when you have pure karma, then you see that living being is a buddha, you see with that qualities. So, whenever our mind is very obscured, doesn’t have pure karma, then, cannot see, you see only, even it’s buddha, you see only sentient being, having delusion, having sicknesses, having delusion, having suffering, sicknesses, having mistakes in the actions, so like that, which is a projection of one’s own, the obscured mind, obscured mind, the negative karma. So the, so like this.

So therefore, in our life, in our life, we, who is buddha, actually buddha, that particular, I mean Tara or whatever, Manjushri, or those male, female tantric deities, so, enlightened beings, but how you see that living being is according to your, if your mind is impure, then you see impure there, so that project, that project impure appearance, having delusion, having mistakes in the action, having suffering, it decorates there, it project, the impure mind project there. So you see, so you have appearance as a sentient being, and you see as a sentient being, so like that.

Then now, on top, there’s the guru, on the top is the guru, how to say, for example, just to understand, just to understand the power, it’s a dependent arising, like the fire has power to burn things, water has its own power to, hts, whatever, the earth, I mean, made wet, whatever, you see, make things wet, that it can do many things, so, each phenomenon has its own power, like that. So now similar, here the guru is one who has the most power, from whom one has received a Dharma connection, from whom one has received Dharma connection with the recognition oneself disciple, that’s guru, then, received even one stanza of teaching, or one verse of teaching, or a few syllable teachings, or mantra, oral transmission of mantra, or whatever, you see, then the Dharma connection is established. So that person becomes the most powerful, after one make Dharma, established Dharma connection, then that person becomes the most powerful being in one’s whole life.

So, maybe I’m going to stop here, but just finish this.

So now similar, similar, if one praise to the guru, then same, merits far more greater than having made offering or praise to numberless Buddha, Dharma, Sangha, numberless statues, stupas, scriptures, all that, you see.

So if one criticizes, say, even one criticism to guru, now, because that’s the most powerful holy object among all the holy objects, so therefore, negative karma is much heavier than having criticized to numberless Buddha, Dharma, Sangha, and all the holy objects, statues, stupas, scriptures, all the numberless Buddha, Dharma, Sangha, you see, all those become small, compared to this one, so like that.

So as far as negative karma, any mistakes, to, relationship with the guru, like that. But any positive things, any positive action, respect or whatever, praise or obtaining advice, fulfilling the holy wishes, however, the good karma is the most powerful, the most extensive merit one accumulate, so like that.

[End of audio file] [The following is from Ven. Munsel’s notes:

...many retreats for many years, many stories. I’ve been practicing Dharma for many years, I’ve done this many prostrations, Vajrasattvas. However, if you really examine all this, if it did become Dharma, even this life we met Dharma, and we believe we’re practicing Dharma, but if we really examine like this, in daily life, most activities we do become negative karma.

So therefore, now, as I just mentioned about shortcomings of anger, how it destroys merit that you put so much effort, collect merits for many lifetimes, then this life practice, then the merits get destroyed by anger, thousands of eons of merit get destroyed by anger. So therefore, now even this life, like this, so if you add past lives, so, past lives, then born as human being but haven’t met Dharma, then create negative karma, then born in lower realms, can you imagine, so born numberless times, since beginningless rebirth, so can you imagine negative karma, all kinds of things, unimaginable. So if you can remember something, if you have great clairvoyance, if you can remember, might get shocked, might cause heart attack, if you have clairvoyance, can remember.

So therefore, no matter how many years we did preliminary practice, how many hundred thousand we did this and that, _____ nothing compared to____ even one did retreat from birth, _____one hundred years retreat nothing, so anyway.

[From Ven. Munsel’s notes: But if you look at their life, their motivation, only the happiness of this life, whatever they do,]

So, this is the life. So, you see, so the motivation is just this, only this life, which is non-virtuous, pure non-virtuous thought, so then all their actions become only non-virtue.

I mean, as I mentioned at the beginning, except some people with a sincere heart, with a compassionate thought, help animal, or help somebody without, without worldly concern, then become virtue, but again, as I mentioned before, then heresy, and anger, those negative thought arises and destroys, so they don’t protect the merits, so like that. So it’s very difficult, even they collect merit, but very difficult to, I mean to last the merits, so this.

Yeah, so maybe we have a break here.

[From Ven. Munsel’s notes: So what I was talking about before]

...at the, particularly at the last, last part I talked about, relating yourself and outside people, neighbors, people in street, just watch and, just by examining, the reason why I was telling, brought up that issue was, so, I talked about in the airplane, if you think, when you look at the people, if you relate to them, if you look at their mind, motivation of their life, and then, then you see, then you feel so unbearable, how much they’re suffering, and then their next lives, you see, wow, there’s great change, unbelievable change from this, to another realm, and particularly the lower realms, like that.

So one Japanese man, one young Japanese man died, I think in California, I think Santa Cruz, something, so, when he died, when he died he got upset with the world, with the world he got upset. Why he got upset with the world, you have to understand, it’s quite intelligent, I think. So, you see, he has been believing, he has been believing things are permanent, I guess sort of like, concept of permanence, family, I mean the house, possessions, I mean the, I think, concept permanence, it’s always going to be like this, you know, whatever you have, whatever you see.

But, you see, generally, he didn’t realize that. So now, suddenly he sees the life, suddenly he sees the, separating from the world, or from the things what he has. So he thought, so this is opposite to what he has been believing. So then, what’s happening, the death, everything he has to leave, separate. So he believing the world has been cheating him, so at the time of death, he thought the world cheated him. So he complained, not himself, his mind, way of thinking, but he complained the world, he put the blame outside, cheated him.