In this book Lama Zopa Rinpoche covers the importance of compassion and universal responsibility and how to make life meaningful, and offers an amazing and extensive explanation of emptiness, the ultimate nature of reality, and teaching how to meditate on emptiness. Within these teachings, Rinpoche also touches on several of the other main points of the path to enlightenment, such as bodhicitta, the three scopes and impermanence. 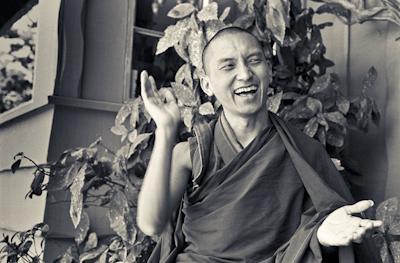 Meditation on impermanence and emptiness

Look at self, act ion, object, friend, enemy, stranger, body and possessions—all these things are transitory in nature, changing within every second by causes and conditions. They are not definite, in the sense that you can always have them, that they will always last. Therefore, there’s no basis to give rise to anger, the dissatisfied mind of desire, the concept of permanence and other wrong concepts.

Be aware that all these things—I, action, object, all the five sense objects, samsara, nirvana, true suffering, true cause of suffering, true cessation, true path—are empty. One-pointedly concentrate on them, looking at their nature, which is empty. This is the way to meditate on The Essence of Wisdom,17 the essence of the entire Buddhadharma and especially of all the teachings of the Prajnaparamita, the Wisdom Gone Beyond.

Believing that the way these things appear is true blocks our seeing their reality, emptiness only (Skt: shunyata; Tib: tong-pa-nyid).18

Looking at the hallucination

Recognize the object to be refuted. Look at what is appearing to you. Looking at an object means looking at your perception of it, at what appears to your mind. There’s no object that exists other than that which appears to your mind. It is the view of your own mind. Looking at an object means looking at your own view of it, which is the production of your present level, or quality, of mind. How purely or impurely you see an object has completely to do with the quality of your mind, whether it is pure or impure. And this applies to how you see everything: people, buildings, holy objects and so forth.

Looking at an object means looking at a creation of your own mind. A form is something that has color and shape and can be seen by the eye. There are different definitions of form. Sounds, smells, tastes and tangible objects are all also classified as forms, but here we’re talking about the particular form that is an object of the eye-sense.

Generally, “form” is labeled on something that has color and shape, is substantial and is an object of the eye-sense. Even though that is the reality of form, form doesn’t appear as merely imputed. Form appears as having true existence, existence from its own side. A cover of true existence is projected by ignorance onto the mere form. So while you are looking at things, think, “This is a projection of my ignorance. This is a hallucination.” Without closing your eyes, look at things and meditate on the meaning of hallucination.

Look at what it is that doesn’t exist and what it is that does. If you can’t differentiate between them, ask yourself, “How do things appear to me? Does this form appear to me to be labeled or unlabeled?” If it appears to you to be unlabeled, that is a hallucination, because no unlabeled form exists. If it’s a form it has to be labeled “form” by the mind. That’s the only way that it can exist. If it appears to be unlabeled, that means it’s a hallucination. You then meditate on the meaning of hallucination.

Another easy way to meditate on emptiness is to think, “This is a dream.” This might make it easier to understand how these truly existent forms—you the meditator, the building, the lights—are empty. To feel the emptiness you look at the forms of the building or the lights as things in a dream. To feel the emptiness of the building, the lights, and all these other things that appear to be real forms from their own side, look at them and label, “This is a dream and I am dreaming. I am dreaming that I’m in the GreatEnlightenmentTemple in New York. I am dreaming that I’m seeing all these statues, altars, lights, buildings and people.”

In the view of the conventional, or all-obscuring, mind, in the view of ignorance, this is a building, this is a light and this is an altar. Even though they are all labeled, or merely imputed, they appear to be unlabeled, to exist from their own side. True existence is projected onto the mere I and everything else. Even though everything exists in mere name, it is covered by true existence projected by the imprint left by ignorance on our mental continuum. In reality all these are hallucinations. In reality everything is completely empty.

It might be useful to meditate this way when you have a problem in your life. It is a great protection psychologically, stopping depression and also stopping the creation of heavy negative karma.

The I in space

Another way to meditate on emptiness is to think of the I in space. Think that the I, the self, that you feel is in the center of your chest is there in space, having nothing to do with your physical body. Think, “I am there in space.”

Another logical reasoning you can use on that real I is to think, “This I is not truly existent.” This should have the same effect: you see that it is empty. This might also be helpful. This is a little similar to the dharmakaya meditation in the sadhanas of Action Tantra, such as nyung-nä , or of Highest Yoga Tantra. This meditation can actually be helpful for that.

You can also do the same meditation wherever you feel the I is in your body—in your brain, your chest, your channels and charkas or somewhere else. Using this logical reasoning, you can analyze whether or not this I exists. If, by using this reasoning, you find that it doesn’t exist, you then see that it’s empty.

By analyzing in that way, you should be able to find the I. But in reality, while at the beginning it looks as if you should be able to find it, as soon as you start to logically analyze whether or not it exists as it appears to exist, it immediately becomes unclear. What appears to be a real I from its own side immediately becomes unclear as soon as you apply the logic of dependent arising to it. As you analyze more and more, the real I from its own side becomes more and more unclear. This proves that there’s no such I. There’s no such I on or inside this body, on the consciousness, or even on the whole group of these aggregates. This I is nowhere. It proves that such an I is nowhere on these aggregates.

As I mentioned earlier,19 the Middle Way teachings give the following example to describe the different views. A magician uses mantric power or the power of substances to transform a jewel palace or a beautiful man or woman. The people in the audience, whose eye-senses are made defective by the power of mantras or substances, don’t know that what they see is a transformation by the magician, so they believe that what appears to them is real. The same things appear to the eye-sense of the magician, but he has no belief that they are real. A third person doesn’t see the hallucination at all because his mind is not affected by the power of mantras or substances. There are these three categories of people.

The members of the audience can later find out that their concept was wrong, that what they saw was a hallucination, the magician’s transformation.

In the view of worldly beings, the I, aggregates and sense objects, which exist in mere name, appear to exist from their own side and they believe this to be true. In their view, things having existence from their own side is correct conventional truth.

Now, arya beings have the wisdom that directly sees, or realizes, that since all these things are merely imputed, they are empty of existing from their own side. However, when they are not in equipoise meditation on emptiness, even though things appear to them as having existence from their own side, these transcendent beings who have the wisdom directly perceiving everything as empty don’t cling to this appearance as true. They have dual view because they still have the imprints left by ignorance that project true existence onto merely labeled things, but they don’t cling to that view as true. Like the magician, arya beings see the hallucination but don’t believe in it.20

Buddhas have completely purified even the subtle hallucinations, the subtle obscurations, the imprints left on the mental continuum by ignorance, the concept of true existence.

In the view of worldly beings’ minds, things that are labeled appear to be unlabeled, to have existence from their own side. They regard this view as correct.

Because of fever or liver disease, people can see a white snow mountain as yellow or because of wind disease, as blue. Because his senses have been affected by drugs, someone can think that there are a lot of people talking even though there’s nobody else in the house. After eating datura, people can see the whole ground as full of worms. Worldly beings can see that these views are wrong, that they don’t exist in reality. They see that there is wrong conventional truth and right conventional truth.

18. The only, not usually used in the English expression, emphasizes that it is the lack of true existence that is being referred to rather than ordinary emptiness, as in empty space. [Return to text]

20. Because of recording problems, forty-five minutes of the teaching were missed at this point. [Return to text]