In 1984, shortly after Lama Yeshe's death, Wisdom Magazine (the magazine of the FPMT, the precurser to today's Mandala magazine) paid tribute to Lama's life and work. There were 30 pages of news, tributes, teachings, poems and photographs. We have reproduced that tribute here. 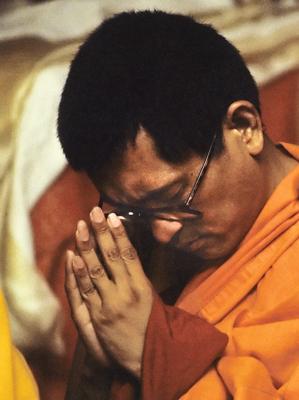 I am just very numb, I can’t think of anything. But I thought I would try and say a few words regarding the recent happenings.

This year, not only our incomparably kind guru, Lama Yeshe, but also His Holiness Ling Rinpoche and his Holiness Serkong Tsenshab Rinpoche have passed away. And other lamas not common to us, other high lamas have passed away as well, this year in India. Whatever other people say, I don’t know, but my own way of thinking is that because of our karmic vision there were great obstacles in His Holiness the Dalai Lama’s forty ninth year. So, it became kind of a choice, according to our karma; either His Holiness passes away or other lamas pass away.

The main thing is: we sentient beings who receive guidance from these high lamas, these holy beings, we simply don’t have enough merit. You see, the vase, the vessel, is too small. Even if there is one very large pot of nectar, all of it cannot fit into that small vessel. I think that is the main problem. These high lamas, His Holiness and all these high lamas, including Lama Yeshe, they do not fit us, they do not fit. Because of our small merit, they just do not fit. They are like a huge burden that we cannot carry.

We need to have incredible merit for all these holy beings guiding us to have a long life. But there is a shortage of merit — even if there is no Dharma contact and we do not have guru-disciple relationship. And to those with whom we have had Dharma contact we have done many things to cause a shortage of their lives, for them to not stay in that aspect to guide us. We have caused it.

As it is with high lamas, so it is the same regarding Lama’s passing away. And it is not something that suddenly happened. Lama planned it some time ago; there have been many preparations. Last year when Lama was in France, for example, he told — Denis Huet, the director of Vajra Yogini Institute — he is very close to Lama, in Lama’s heart — he told Denis: ‘I will leave my body at New Year.’ I said to Denis, ‘But Lama must be joking!’ He said, ‘No, Lama is serious.’ I told Denis that he should write to Lama and explain to him all the reasons why he should live long.

So, it’s not as if Lama was an ordinary person without any choice in death, not like that.

And recently, just before Lama left Dharamsala, almost every day, over and over, he would be saying things like, ‘If I don’t die then I will do this; if I don’t die...’ Always death, always conversations involving death, all the time.

That morning, just before completing the past year, also Lama’s forty-ninth year, Lama asked me to do the Heruka sadhana with self-initiation with him. Even though Lama was in the aspect of heavy sickness he was able to keep straight and do the Heruka self-initiation. I know that if I had had such problems I would not even remember om mani padme hum. Even when I am healthy I cannot remember it; when I am sick — impossible! I would only have thoughts of my sickness, nothing else.

So I think we can understand from Lama’s signal, quite tough, that he could not accept. We can see from that, it is clear.

Recently, I heard that if you make a mistake with one guru, that pollution will cause you to make mistakes with other gurus, even though in the first place the mistake was only with one.

However, the main point is that Lama did not accept, he did not respond. But since our mind is not oneness with anger, not oneness with ignorance, not oneness with attachment, as everybody knows: since they are not mixed with our mind, since it is possible to separate them from our mind, then I think we should attempt to subdue the mind and develop a good heart. And in that way harmony will come. This, then, becomes pleasing to Lama — even though no longer the same aspect — and becomes the best offering and a cause for him to reincarnate quickly and guide us. Again we will be able to enjoy the continuous nectar of the profound and extensive teachings of Lama.

I think the most pleasing thing at each center, the first thing, the most important thing is to be able to develop one’s own mind, to practise bodhicitta and patience as much as possible, to develop a good heart. Then, you see, that center will really develop. It will have an incredibly good vibration, harmonious and with no confusion, and just by being there people will be able to generate realizations easily. People will want to stay there, they will want to do retreat, they will want to do things. This is the best way to develop a center.

Just to talk generally about the development of the center, about teachings, without relating it all to one’s own mind, makes the Dharma something in the sky. You can’t point out the teachings somewhere in the sky. We must relate them to our own mind, our own life. That is the best offering to the Lama, that is fulfilling Lama’s wishes.

If you were to have a competition between the centers it should be in relation to Dharma practice and the development of the mind, not material.

Three years ago, when Lama was in Spain, he gave some instructions to Jampa Chökyi about what we should do when he passed away. First, he requested her to translate texts to be used when he passed away, then there were ceremonies to do. The students should recite Vajrasattva mantras and do Vajrasattva practice for one year at Lama’s holy body, ‘then they can keep my body for one year.’ I have discussed this with His Holiness Zong Rinpoche and he advised that we have a cremation. But I think that Rinpoche’s wishes and Lama’s wishes are the same thing, there is no problem. ‘Then, wherever my body is, all the students should come and they should do Vajrasattva recitation for one year without interruption.’ Lama told Jampa Chökyi. This means that people can come and go, as long as there are people there continuously reciting.

I think we should discuss the Vajrasattva meditation. Either everybody can come to the place and do the one-year retreat or, if that’s not manageable then I think we can make a statue of Lama at each center and the students of that country gather there to do the retreat. Otherwise I think we can do it at Kopan. According to the observations made, the choices were either Kopan, Spain or New Zealand retreat centers, but Kopan came up twice. I think it’s because it’s the place where all the centers started, you see.

Lama’s relics will be distributed to all the centers and can be put in either a stupa or a statue of Lama. We are planning to make a large statue of Lama in the form of a monk but having the Vajrasattva mudra holding bell and vajra. Also His Holiness the Dalai Lama has advised us to make one statue of Lama and a thangka of the Thirty-five Buddhas. So, everything comes to the same thing, I think it is something that the organizers can discuss.

Mainly I thought I would talk a little about how Lama is learned: about his enthusiastic perseverance, his loving, good heart. But I don’t need to say much, you have met Lama so many times, so you know. I don’t need to repeat again Lama’s qualities.

However, all the Dharma knowledge that we have, all our opportunities to purify, to accumulate merit, to plant seeds of the entire path to enlightenment by practising sutra and tantra — all this comes from Lama. Before we heard Lama’s teachings our mind didn’t have the Dharma. There was no refuge, no understanding of or faith in karma, no understanding of happiness and suffering. Our mind was completely dark. Now, we have some Dharma knowledge, we have the opportunity to practise even such profound methods as tantra every day. All this, all this merit, all this Dharma knowledge, came from Lama. First we listened to his lecture, then inspiration came. So, we should remember the kindness of Lama all the time.

His Holiness Zong Rinpoche said, even if we have studied with other geshes at the centers, the centers that Lama started, it is all due to the kindness of Lama, it all came completely from Lama.

I would like to thank everybody who sent money for Lama’s operation, all the donations. And to thank you so much for all the prayers: all the time I was sending instructions to the centers to do this and do that. So thank you for everything you did. Maybe it is because of those prayers that Lama lived even a few more months.

And I would like to say thanks from my heart to the Vajrapani people who have worked so hard, in the past and now at this time. They have worked with such dedication, doing their work so well without confusion, being so harmonious together. I would like to offer thanks to the nurses who took care of Lama, they had such hardship. And the doctors: thank you so much to them.

I think that’s all. If we follow Lama’s wishes, every piece of advice, if we put it all into practice then I think it will become a quick cause for Lama to reincarnate soon. Maybe he will even come to America! I’m not sure!

I think that’s all, I will pray. Thank you so much, thank you.