The Benefits of Making Offerings

A teaching on the benefits of making offerings to holy objects and how to create skies of merit by reciting the Offering Cloud Mantra. This teaching was given by Kyabje Lama Zopa Rinpoche at Amitabha Buddhist Centre, Singapore, March 2013. Edited by Ven. Tenzin Tsultrim; second edit by Sandra Smith.

See also The Benefits of the Clouds of Offering Mantra, and Lama Zopa Rinpoche's Online Advice Book. An Extensive Offering Practice booklet is available for free download from FPMT. 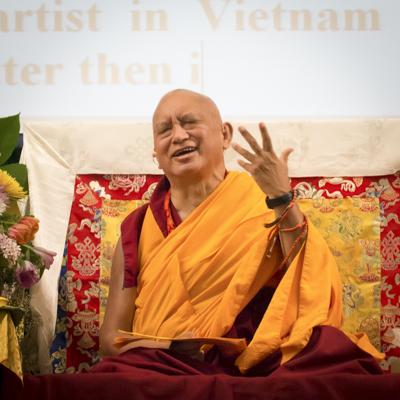 The Benefits of Making Offerings

Just seeing a portrait or statue of Buddha purifies our mind and plants the seed of enlightenment. Whether we are believers or non-believers, we get that benefit, to be free from oceans of samsaric suffering. We have never been free from suffering, since beginningless rebirth up till now, so it gives us that incredibly precious opportunity.

It is mentioned in the Sutra of Piled Flowers that we can achieve that much happiness. That is most amazing! On top of that, we can achieve ultimate happiness, liberation from samsara, liberation from the oceans of samsaric suffering, forever. On top of that, we can achieve full enlightenment, the total cessation of not only the gross, but even the subtle obscurations. Because of that, we achieve all the understanding, the omniscient mind, full of realizations. Even after that, we are able to enlighten numberless hell beings, hungry ghosts, animals, human beings, suras, asuras and intermediate state beings. You, the one person, can free them from oceans of samsaric suffering and bring them to full enlightenment. All that benefit is achieved for the person who offers one grain or one tiny flower to even one tiny picture, statue or stupa.

Now just by seeing a statue or painting of Buddha, we collect numberless great merits. As I said in the example, even giving the medicine and food one time has a karmic result like that. But just by seeing a picture or statue of Buddha, we collect numberless greater merits, so the previous example, compared with this, becomes very small. Seeing a picture or statue of Buddha collects unbelievable, numberless great merits, as mentioned in the Sutra of the Mudra Developing the Power of Devotion, quoted by Shantideva [in the Compendium of Trainings].

It is mentioned that if we make offerings of light or incense, do prostrations and so forth, we collect numberless great merits, so the merit of just seeing a picture or statue of Buddha becomes small compared to this. How precious they are! Stupas, pictures and statues are so precious. They are unbelievably precious. We should remember this with awareness in daily life, showing respect and making offerings or prostrations.

Therefore, it is so important to have many holy objects in the house, not only on the altar, not only where we meditate. Maybe in the bathroom where there is a bad smell, it is not so good, but in America at Kachoe Dechen Ling, I have one verse written and framed in the bathroom. It is one quotation from Ling Rinpoche. He often recited it, so I put it in the bathroom, but I don’t get to read it every day. I read it sometimes, but not every day. In the house, there are many, many rooms full of pictures of the Lama Chöpa [merit field], the Thirty-five Buddhas, the Medicine Buddhas, and many, many more. So when you open your eyes, you see these wherever you look. Wow, wow, wow, wow, what merit you collect.

All the collections of goodness of samsara and nirvana
All result from making offerings to the Rare Sublime Ones.

In particular, by making the various offerings, we get different individual benefits.

In the Sutra Clarifying Karma:

The first benefit is that in the world you become like the light.

His Holiness the Dalai Lama, for example, is like the light. No matter where he is and how many people there are—Tibetan lamas, monks or Western-educated people—he is like the light there among the people, because he is pure in morality, learned and good-hearted, with all the qualities. So, if we make offerings we become like a light in this life and future lives—not just in one life, but in future lives. For five hundred or one thousand lifetimes, we become like the light in the world.

The second benefit is that we achieve clairvoyance. Another important benefit of making light offerings is achieving Dharma wisdom. If we want to develop Dharma wisdom, then offer light.

Many people might think if you are offering light, it should be just a butter lamp, a candle or an oil lamp. Thinking that you can’t offer the other lights in the house, for example, electric lights, is a very limited idea. Thinking that you can only offer candles is wrong. Whatever light is more clear and dispels darkness, that is the better light, so you can offer all the lights in the house. When you do a sadhana or an offering practice, you can offer those lights.

By making light offerings, you are able to dispel the darkness of ignorance and achieve wisdom. By offering light, you are never in darkness while you are circling in samsara. There will always be light. And offering light just one time to Buddha creates the karma to have great wealth for many hundreds or thousands of lifetimes.

The next benefit is being born in a higher rebirth, in a pure land. We quickly achieve nirvana, and not only nirvana but also the great nirvana, enlightenment. These are the benefits of offering light.

It is mentioned in the Sutra of the Arya Loving Kindness:

Offering light is an especially quick way to collect merit and to receive blessings. This creates a special dependent arising. In the second chapter of the Heruka Root Tantra, it is mentioned that if you desire attainment then offer a hundred lights. Here [at ABC] it is not only a hundred lights, it is 100,000 light offerings above, and 20,000 lights. Don’t think offerings are only what you have at home. That’s very, very limited. You must remember all the light offerings at least at ABC, where are 100,000 lights and 20,000 lights.

If you wish to achieve sublime realizations, marvellous realizations, then offer smell, incense, and flowers. According to ceremonial prayer, you can also make offerings of a hundred lights. In the root text of Heruka, it mentions offering a hundred lights. If you can, offer as many as possible. For example, you achieve those higher and higher bodhisattva bhumis and emanate a thousand bodies, a hundred thousand bodies, a million bodies, as you achieve higher realisations.

Offering to the Buddha always, always has that benefit, and not only that, we achieve total enlightenment, the total cessation of not just the disturbing-thought obscurations, but also the subtle obscurations which interfere with the mind becoming an omniscient mind, full realization with nothing left to realize, nothing more to understand.

Can you imagine? Can you get the idea? At the same time, having direct understanding of all their karma, all their levels of intelligence, and having the various methods to free them from suffering and cause them temporary and ultimate happiness, and to bring them to full enlightenment. Knowing every single method—the different teachings, the different advice—and knowing exactly the different methods that fit them, ultimately, to bring them to enlightenment; knowing everything. Having perfect power to reveal the methods according to their karma; and to manifest the holy body, holy speech, holy mind, can you imagine? There are numberless forms according to the karma of numberless sentient beings, and when we achieve enlightenment, this happens without any effort, without motivation, it happens naturally. Amazing, amazing, amazing!

The Benefits of Making Offerings
The Offering Cloud Mantra