Rinpoche made the following comments on the tsog ceremony. 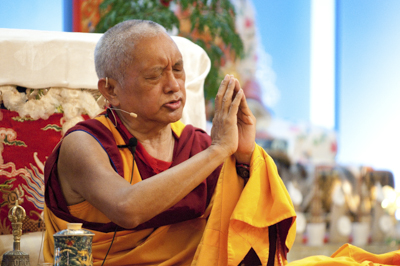 My very dear Charlotte,
Thank you very much for all your devotion, dedication, and service to me and to all sentient beings in the organization. When I was doing Vajrasattva tsog with the group, I saw a few things in the text that I wanted to comment on.

First, there needs to be a brief introduction to the tsog offering practice to help others to understand more, to elaborate a little the explanation, the meaning of tsog. It does not just mean torma and foods that you offer, that is not the meaning. This is a more extensive explanation of what tsog is, and the importance of and benefits of it.

It is said by Pandit Ratna Raksherita:

The very highest meaning of tsog is to join method and wisdom. The real meaning of experiencing tsog is the transcendental wisdom, non dual great bliss – the wisdom of emptiness, the non-duality of that, and uniting these two. That is the very essence of tsog. It is the offering of that experience, oneself experiencing it, the male and female heroes and heroines, of which the essence is the guru deity, and oneself also experiencing that, as the guru deity. The real meaning of tsog is integrating method and wisdom, the transcendental wisdom, non-dual bliss and voidness (this is the secret meaning).

The need for the actual tsog substances is to develop the very heart of the Mahayana and tantric path, that brings enlightenment in one brief lifetime of these degenerate times, because it ceases the defilements quickly, including the actual negative imprints left on the mental continuum by the delusions, and is the quickest way to collect extensive merit, which takes three countless great eons on the paramita path to collect to achieve enlightenment. Here, in a brief lifetime of these degenerate times, using the transcendental wisdom of non-dual bliss and voidness to increase this, one needs to enjoy these tsog substances.

The best is to offer tsog every day. If not, then as it is explained in the Heruka Root Tantra:

Quickly attempt to make offerings
Every waxing and waning of each month do tsog.

Every day as much as possible (meaning if one cannot do it every day, then as many times as possible)
It is especially admired in the night time
At least once a month, or if that doesn't get done then at least once a year
If one transgresses this circle then you degenerate samaya.

According to the Heruka Root Tantra, the best time to do tsog is the nighttime.

From the Heruka Root Tantra:

This means the dakas and dakinis always wander at night time and gather at nighttime.

The waxing and waning of each month
If good tsog is offered
Then one has no hardships, no difficulties
And one goes to the pure land of Tharpo Kachoe.

Regarding the actual offering substances, even if you don't have any other substances, then at least you need bala (meat) and madana (alcohol). These two are of utmost importance; you need to have these two for tsog substances.

From the Tantra Do Jung:

Without torma intoxicating
You won’t have quick attainments

Here, the intoxicating refers to alcohol; it does not refer to other drugs.

From the Heruka Root Tantra:

Vajra goddess – intoxicating and meat
If the capable being offers these with devotion and respect
Then Heruka will be actually pleased
Therefore making offerings with a very satisfied mind
Then sublimeness (enlightenment) will be granted.

This means that those who are doing this practice, because Heruka is actually pleased, sublimeness (enlightenment) will be handed to you, it will be very easy to achieve full enlightenment (it is like saying you will achieve liberation in the palm of your hand, very easily.) If you correctly practice, then liberation is not far, not difficult, it is in your hands. It means you can achieve liberation easily and very quickly.

When you perform tsog, the tsog substances should be as follows: on the right side is the bala (meat), and on the left side is the madana (wine).

It is mentioned in the tantric text Nyingpo Gyen (Heart Ornament) with this special term for wine – madana, and meat – bala. What happens when you use these two terms is psychological. If you mention just wine and meat, then it is ordinary, and then one has an ordinary appearance. Also, when you experience it (taste it), all you taste is meat and wine. Then, it does not become part of tsog practice. You have to taste it with pure thought and pure appearance. One has purified and blessed it into nectar. The real meaning of tsog is transcendental wisdom, non-dual bliss and voidness.

So, when one takes the tsog, one experiences that. Even if it is not actually experienced, then at least visualize it is happening, that one is experiencing that. So take them with this recognition, with the pure transcended mind.

Also, you can't put tsog on the ground. Sometimes at Kopan Monastery I see that they just offer the tsog and throw it on the ground (i.e. they don’t put it on a plate or in a bag). It is always better to use a paper plate or paper bag. If you just put it straight on the ground, then the people who serve the tsog and the people who receive the tsog actually receive a tantric vice (bonpo); this is very heavy. So, it is better use a paper bag or paper plate, like they use in Namgyal monastery, to protect the tsog. It is mentioned when collecting the remaining tsog to start from the bottom of each row. When you offer tsog, you offer it first to the Vajra Master, and when you collect the remaining tsog you start from the bottom of each row and work up to the top, and, lastly, you collect it from the Vajra Master.

As well as having the bala and madana to collect more merit, you can also offer other substances as extensively as you can. On certain specific occasions, if you have the substances, you can make an actual torma tsog, using tsampa (or oats, flour, or whatever can be shaped).

Make the torma in the shape of a human heart or human breast. The torma must have decorations. The decorations should be a Dharma wheel, with flower petals around it, and it must have a sun, moon, and nada (three curves) on the top. This is according to Lama Tsongkhapa and Pabongka Rinpoche’s tradition.

When offering Vajrasattva tsog, what I remember according to Lama Yeshe, is that when you recite the Vajrasattva mantra you play the bell only. Then, regarding the rest, it should be the same as Lama Chöpa: “…Nye cher bul,” then you ring the bell. If you are doing the chanting in a short way, then you must ring the bell. When you are doing the chanting in a long way, then you can you can play the bell and damaru at “OM AH HUM”. When you are doing it quickly, then just do “ner chy bul” and “em ah ho,” then play the bell, damaru, and cymbals. When doing “Lama Dorje Sempa,” you must ring the bell. At the last words, then ring the bell, damaru and cymbals. But when you are just reciting Vajrasattva mantra, then you just ring the bell. As I mentioned during the initiation, when you ring the bell during the mantra, this is not an offering. When you ring the bell the sound means: no phenomena among us has inherent existence, everything is empty. Here, it is reminding you that negative karmas are empty, do not exist from their own side, so you can purify negative karma by meditating on emptiness; the bell is reminding you of this. Meditate that you – the creator, the action – creating, and the object – negative karma, are also empty. This is the meditation to be done when ringing the bell during the Vajrasattva mantra.

Cheese is not qualified for tsog, it actually needs meat, as I have explained in those quotations, the pure references from the tantric texts.

Those who are not familiar with tantric practice can be totally shocked if you are Buddhist and you are seen eating meat; they think it is like killing a human being. Once in Bodhgaya, there were one or two Theravadan monks present, and the leader of the temple passed the meat and also offered it to them. His Holiness the Dalai Lama was present. He made a little smile, because the person had offered meat to somebody who doesn't understand the practice. But the Theravadans ate whatever they were offered. Normally, they don't eat in the evening, and for them to be offered tsog substances in the afternoon was strange. Using cheese is for such an occasion when there are people from other traditions present who might be shocked or lose faith.

But it seems even some monks at Kopan Monastery, as well as other people, are using fruit juice for alcohol. The people passing the substances should be aware not to pass the meat and alcohol to people who do not practice Highest Tantra or to Theravadans who do not eat in the evening/afternoon.