In this letter sent to his dentist, Rinpoche writes about a sacred lake in northern India where he went on pilgrimage in February 2016, and also gives an outline of the Buddhist path. 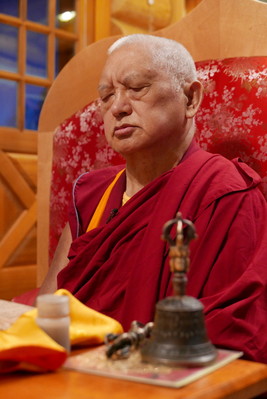 My most dear, most kind, most precious, wish-fulfilling doctor and also your precious wife,

I am here for some days in northern India, at a particular holy place of Padmasambhava, who is a great enlightened being. The place is called Tso Pema. First of all, to understand a drop from the ocean of Padmasambhava’s life, his activities benefiting other sentient beings.

There is one story in Tibet; at one time the Dharma king of Tibet, Trisong Detsen, was building the first monastery in Tibet in Samye. In the daytime human beings built the monastery up and at night spirits tore it down. This happened many times. The minister or the king said there was a powerful yogi called Padmasambhava who should be invited from India to Tibet to subdue the spirits.

So the powerful yogi Padmasambhava came to Tibet and arose as a wrathful enlightened being, which means having no obscurations and having completed all the qualities. Then he hooked all the spirits who interfered and three ran away, which was according to the karma of the Tibetan people. Twelve spirits were subdued by him and gave pledges to become Dharma protectors and to protect the practitioners, so then the king was able to complete the monastery. Of course there was great destruction that happened during Mao Zedong’s time and the monastery had to be rebuilt, as well as an incredible amount of temples.

The second time I was in Tibet I went to Samye Monastery on the day of a festival and they had religious dances and so forth on that day.

Padmasambhava went not only to that place but to many places in Tibet where there were spirits and he subdued them and gave them pledges to protect the area. He also taught Dharma in many places, he gave teachings on Mahayana tantra, so then the Buddha’s teachings were able to spread and be established due to this.

There are 84,000 teachings of the Buddha and they are condensed into three levels. There is the Lesser Vehicle (Hinayana) and the Greater Vehicle (Mahayana) which is divided into two: sutra (Paramitayana) and tantra (Vajrayana). Regarding the Lesser Vehicle teachings, by listening, reflecting and meditating on these, we see the true suffering, true cause, true cessation of suffering and true path to achieve that. By actualizing the true path we achieve the ultimate wisdom directly perceiving emptiness only (shunyata in Sanskrit). Then we are able to remove the cause of suffering—mental delusions and karma. Once this is totally removed we can be free from the oceans of samsaric suffering—we are able to abandon that totally, we are able to be free from that suffering forever, including toothache and tooth problems. We achieve ultimate happiness, which is forever, not just for a few hours or a few days.

Next are the Buddha’s Greater Vehicle teachings, sutra (Paramitayana), where by listening, reflecting, meditating and practicing we can achieve the total cessation of all the obscurations and total completion of all the realizations forever—buddhahood, or sang gye in Tibetan. This is the highest, ultimate happiness. Then we can help the numberless sentient beings—every hell being, hungry ghost, animal, human being, sura, asura and intermediate state being—by freeing them all from the oceans of samsaric suffering and bringing them to the peerless happiness, the total cessation of all the obscurations and completion of all the realizations. But [the sutra path] takes a long time, three countless eons, to complete the cause to achieve a buddha’s holy mind and holy body, and the cause is the merit of wisdom and the merit of virtue.

Because it takes so long, the Buddha has taught the Great Vehicle tantra path, the Secret Mantra vehicle (Vajrayana) which has four classes: Kriya (Action), Charya (Performance), Yoga and Maha-anuttara Yoga Tantra. By practicing the Great Vehicle tantra path we can achieve buddhahood in this life. It’s so much quicker and we can achieve buddhahood even in one life, because it has greater methods than sutra.

Now the fourth class, Highest Yoga Tantra or Maha-Anuttara Yoga Tantra: by listening, reflecting, meditating and practicing and actualizing this path, we can achieve enlightenment in a brief lifetime of degenerate times, within a few number of years, because it has the greatest skill, method and wisdom. Not only that, the whole idea is that it’s not only for our own ultimate happiness that we are trying to achieve this; it is actually for all sentient beings. So it is the quickest way to be free from the oceans of samsaric suffering and bring all sentient beings to the peerless happiness, buddhahood, having ceased all the mistakes and completed all the qualities.

Without meeting the Buddhadharma and actualizing the path, then, for example, myself, I have suffered from beginningless rebirth in samsara, in these six realms—hell, hungry ghost, animal, human being, sura and asura—and again I will have to suffer in these six realms without end, so this is most shocking. This is because I could not see this, because of not having omniscience, not even having clairvoyance to know past and future, so having no understanding of yesterday, no understanding of tomorrow, only living today, living like that, with that belief. Not knowing the evolution, what is cause and effect—that what is happening today is the result of the day before, yesterday, last year and what we do today will affect the day after that and so forth. So not knowing past life and future lives.

Buddhism was not only taught in India; the whole of Buddhism was also taught in the snow land of Tibet, where the complete Buddhism was spread by great Indian pandits from Nalanda Monastery who came to Tibet. They studied for a long time, like scientists in the West, they experienced the path in the monasteries and outside the monasteries in the mountains; they really actualizing the path by meditating. So many beings, great holy beings, bodhisattvas and so forth became enlightened, attained buddhahood—they ceased all the obscurations and completed all the realizations and attained the peerless happiness.

Tibet was unbelievably blessed, because in so many caves different holy beings achieved buddhahood. In so many caves the holy beings achieved different realizations for so long, even after the communist Chinese took over Tibet and destroyed so much. But then His Holiness the Dalai Lama was able to come outside of Tibet and also many monasteries and nunneries were rebuilt in India and Nepal and thousands of monks and nuns are there now continuing their studies and practicing. In this way Buddhism has been revived on all levels in Nepal and India, and now Buddhism is in most places, also in the West—including America—where it has spread and developed.

The light of Buddhadharma now shines in many Western countries and is dispelling the darkness of ignorance and the real happiness, the ultimate happiness, has been introduced. It has been brought there to explain what we can achieve. So I, myself, and all students are able to make our lives meaningful by meeting Buddhadharma, by meeting the Buddha’s teachings, and this is all due to the great yogi Padmasambhava’s kindness.

Now I am here in Tso Pema, a holy place of Padmasambhava. There are caves where he meditated and people still go to see the caves and practice, collect merit and create the cause of happiness, by meditating and praying. Padmasambhava was here 1,300 years ago and he gave initiations and teachings to Princess Mandarava.

When Padmasambhava gave initiations and teachings to Princess Mandarava, the king found out. He didn’t know Padmasambhava and wanted to burn him in a fire, so he caught Padmasambhava and tied him up and brought him into the fire. Padmasambhava suddenly showed a miracle and instead of the fire burning him, a lake appeared and he was sitting on a lotus in the middle of the lake. The lake, which is still here up until now, is the lake that Padmasambhava created. So many pilgrims come from Nepal, Ladakh and different parts of India to circumambulate the lake.

During the time that Padmasambhava was lit on fire, Princess Mandarava was also imprisoned. She was put in a deep hole, like a prison, by the king, but after that he developed devotion to Padmasambhava and completely changed his mind. This was after Padmasambhava transformed the fire into a lake. Then the king received Padmasambhava at his palace, made offerings and totally changed his mind, and then he brought Princess Mandarava out of the dark hole where she had been placed. This is how this place, Tso Pema Lake, became famous, and this happened 1,300 years ago.

After I leave here I am going to Nepal, to Maratika, another holy place of Padmasambhava where he achieved Buddha Amitayus, the long-life buddha’s immortal realizations. I am going there to pacify some long-life obstacles, as well as for Holly, who I think you spoke to on the phone, and also for Roger Kunsang, who you know, to also have a long life and to pacify obstacles. So this is my BBC news update or CNN news, as you like.

I also wanted to express one thing about when I eat, particularly the Tibetan food tsampa, which is ground barley flour. It is a special Tibetan food, not from China. The rich way to eat it is with Tibetan tea and butter and salt, so you mix the tea with tsampa and also you can have it with dried Tibetan cheese (cheese from Tibet not from India or Nepal). Normally you also put in butter and sugar, but because I have diabetes I can’t have sweet things. You mix it up and eat it with Tibetan tea and also you can have some cooked vegetables with it. So anyway when I eat tsampa, the tsampa goes down under the teeth, between the silver and the teeth, then as I bite, the teeth pop up, because the tsampa gets between them. That is just one thing, something interesting that you may not have known before, this is news from your patient. It means I am enjoying tsampa, a sign that I am enjoying tsampa.

PS. I heard an earthquake happened in the ocean off the coast of California. I hope it is not a big danger for the animals in the oceans, for the sharks and so forth.