Rinpoche sent this card to a person who was going to translate the Lamrim Chenmo into German. 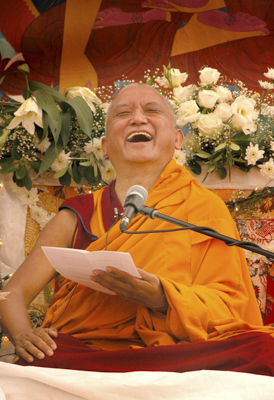 My most dear, most kind, most precious, wish-fulfilling one,
A billion, zillion thanks for your willingness to translate Lama Tsongkhapa’s Lamrim Chenmo into German language, which doesn’t exist. That is so good, so worthwhile, a great purification for yourself, and you will collect extensive merits, especially if it is done with bodhicitta. So you should do it well with a group of people who have good knowledge of Dharma and German language.

The English translation of Lamrim Chenmo was done by different professors and I think there are still some words that need to be corrected.

You have to think like that, motivate like that. Think you are bringing them to enlightenment every time you begin to translate.