In this letter, Rinpoche describes his experience of Bhutan while on pilgrimage there in 2016. Rinpoche praises the country’s policies, which include not harming sentient beings, protecting the environment and restricting tobacco products. 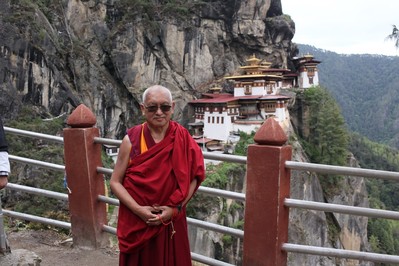 My most dear, most kind, most precious, wish-fulfilling one,

I was in Bhutan for one month, and I went for pilgrimage mainly in Paro and Thimphu. Later I would like to go again and go to Bhumtang, to do more pilgrimage. Also, this is where Lama Tsongkhapa has been before and there are supposed to be many holy places, as well as many Padmasambhava holy places there.

I don’t know what I have told you before about Bhutan, anyway it is a very amazing country. You are not allowed to destroy the mountains, to mine, to get oil, gold or anything, because the Bhutanese don’t want to disturb the devas, landlords and nagas, and in that way make the country kind of empty, losing power.

In Thailand, Sri Lanka, Burma and so many Theravadin countries, the people have so much faith in the Sangha, but then they eat all the sea animals, while also offering to the Sangha. So that is a huge difference regarding where Buddhism, not harming others, is really practiced. When we take refuge in Buddha, Dharma, Sangha, so by taking refuge in the Dharma, what we should practice is to abandon harming sentient beings, but that is not there in some Theravada countries. I am sure there are individual people, but it’s not well-known by the general public.

Bhutan is incredible. Also smoking cigarettes is not allowed generally, but to give some freedom to people who have got into a very bad habit, they allow people to bring only two packets of cigarettes into Bhutan, not more than that, so that is very good.

I think as well as no fishing, there is no killing animals, but they bring meat from India. In the past it was very difficult to invite the monks to do pujas—this was a long time ago—as they would have to kill an animal for food to offer and they would offer a big piece of meat, like steak, with the food, on the rice. This was the same as in Dromo in Tibet, where I became a monk.

So now the Je Khempo, who is like Ganden Tripa, the regent of Lama Tsongkhapa, so Je Khempo stopped the custom of people having to give money offerings for pujas. He made a rule that they don’t have to pay the monks who do the puja and also they are not allowed to offer meat. This is so that even the very poor people can afford pujas and so forth. Also, they can’t offer meat to the Sangha. So he made it really good, especially for the poor people; it’s so good and fantastic.

These are just some details, there may be more. In regards to not allowing fishing, that came from the side of the public, not from Je Khenpo. That is so good, many of the rules came from the public.

May you have eons of meaningful, healthy, long life and may all your activities to support the teachings of Buddha and sentient beings be successful, without any obstacles.