A student wrote that they had a deep fear of death from an early age and asked Rinpoche how to overcome this fear. Rinpoche offered this advice. 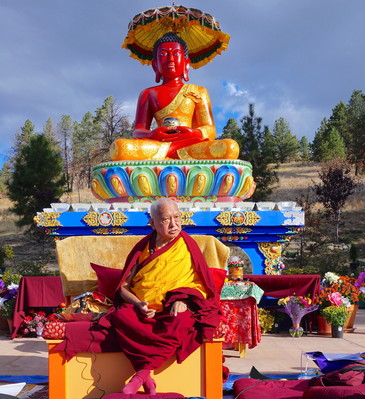 My most dear, most kind, most precious, wish-fulfilling one,
Regarding your question about death, that is due to imprints from a past life, so there is an imprint about death on your mental continuum and from that big fear arises. The same thing happened in my life when I saw death for the first time. It happened in Rolwaling, down below my alphabet teacher’s house. At that time he was a monk and there was one ngagpa [tantric practitioner] whose wife had died. They were taking the body into the forest to burn and before the cremation they had a fire mandala printed to put inside instead of drawing it. Then they put her body on that and maybe did an offering [practice] like the fire puja deity, I think.

Her body was covered by bedding but then they took the whole body out, naked. That was the first time in my life I saw a dead body. I was standing watching that and then I was so afraid for three days. I was so scared for three days. But the fear didn’t happen after that; it was just that time.

Generally, I think it’s good to be afraid of death, because it reminds us of our own death. If we don’t want to die, if we don’t want the suffering of death, then there is no other solution than Dharma practice. We need to study emptiness and to realize emptiness—the other antidote is bodhicitta—in order to abandon death, to be free from death and achieve enlightenment.

By realizing emptiness we can be free from death. By direct perception of emptiness we can remove the cause of suffering—delusion and karma—then we can be free from the oceans of samsaric sufferings forever. We not only purify the disturbing-thought obscurations by developing the wisdom directly perceiving emptiness,  we also cease the subtle obscurations to knowledge and then we achieve enlightenment.

Afraid of death, I fled to the mountains, where I realized the nature of the primordial mind.
Now even if death comes to me, I have no fear.

So according to your situation, have no fear, like that. To realize that we need to meditate on impermanence and death from the lamrim, from the gradual path of the lower capable being. This is the most important meditation so that you remember Dharma all the time and are able to practice with courage, to continue your Dharma practice and then have realizations of renunciation, bodhicitta and emptiness. Even before that you don’t need to be scared. But you need to practice, so meditate on the lamrim, the lower path and you don’t need to be scared of death.

Numberless meditators did this in order to overcome their attachment to this life, as well as ignorance, hatred and so forth. Therefore meditate on impermanence and death very often, then later when you die you don’t have to be scared because you will have freedom. This will be the best death, so happy, because you can be reborn in a pure land where you will be unbelievably happy. The next benefit is that your mind is totally happy because it is certain that you will be reborn in the higher realms, as a human being and so forth. The last benefit is that you will have no fear.

There are different explanations from some lamas about directly perceiving emptiness and ceasing or being free from death by ceasing delusion and karma, the cause of suffering. Next is realizing emptiness but not directly, then bodhicitta is the next one, then next is having no fear of death, and lastly being reborn as a deva or human.

By meditating on impermanence you become victorious over the mara of laziness.
By actualizing emptiness whatever you have done becomes holy Dharma.

It is a great teaching. Therefore, meditate on impermanence and death. This is so important to make the life most meaningful and to actualize the lamrim from beginning to end, beginning with correctly following the virtuous friend up to omniscience.