Freedom is in Our Hands

Freedom is in Our Hands

A student wrote that they had tried something many times and were unsucessful. The student asked Rinpoche if that was the universe saying it wasn’t right for them. Rinpoche gave this advice on becoming free from samsara, cyclic existence. 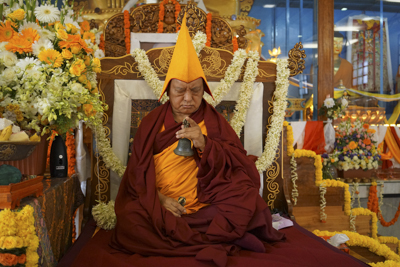 My very dear, most precious, most kind, wish-fulfilling one,
Thank you very, very much for your email and your message, New Year greetings.

For example, we can become free from samsara and after that achieve enlightenment—peerless happiness, the total cessation of all the obscurations and completion of all the realizations—and then free the numberless sentient beings totally and bring them to peerless happiness, buddhahood. Of course, our mind at the moment is full of mistakes, totally obscured, like darkness, no light, no sun, and on top of that filled with fog, so it is obscured by defilements, therefore we are not yet able to do that.

The reason that we can be free from samsara—from the oceans of samsaric sufferings, the six realms of sufferings—and achieve enlightenment and bring sentient beings to enlightenment, is because the nature of our mind is not oneness with the defilements; it is not one with anger, attachment and ignorance.

If our mind was oneness with anger, attachment and ignorance then it would not possible. But we can be free from suffering in samsara. The nature of the mind is pure. You see in many other sects, like Kagyu and Nyingma, the meditators believe this—that the mind itself is already enlightened; that our mind is already enlightened and is just obscured now. But there are different ways of thinking and meditating.

According to Lama Tsongkhapa’s way of explaining the nature of the mind, the ultimate nature  is totally pure and there is no difference between sentient beings and the Buddha. There is no difference in the ultimate nature of oneself and the Buddha, but only in the conventional nature, the all-obscuring nature, the different sentient beings’ obscurations.

The Buddha is totally free from obscurations, is not obscured and has fully developed realizations, therefore every sentient being can also achieve enlightenment—every single hell being, hungry ghost, every single animal, every single ant, mosquito, slug. Everybody can achieve enlightenment and will be enlightened in the future, because the ultimate nature is pure. In the ultimate nature there is no difference between sentient beings and the Buddha, between oneself and the Buddha.

Suffering is because of being obscured temporally, therefore we have suffering, but it’s not forever; because enlightenment is possible, we can be free from samsara.

According to the present state of mind, as I have described, it is dark, foggy, so like that it is obscured. It looks impossible to achieve all those things that I said, but we can’t give up, because numberless sentient beings have become free from samsara and have achieved enlightenment. Sentient beings are the same as the Buddha. Buddha Shakyamuni was the same as us before becoming enlightened—he had problems, but he changed his mind with bodhicitta, he cherished other sentient beings and let go of the I.

What I am saying is that we have to try this to be free from samsara, to achieve enlightenment, it is the most important thing. If we want happiness and don’t want suffering, this is what we have to do, with much effort, like Shakyamuni Buddha, who was the same as us but changed his mind and became enlightened. We can also do the same thing; we can change our mind and become enlightened.

This is why it is extremely worthwhile to learn Dharma and to practice Dharma. This is the most important thing, even more important than our job, money, food, etc. Actually, our job, money and food all come from Dharma, from our past life, from having practiced charity to other sentient beings in past times. With the thought of giving—through charity, not being miserly, through giving—from that came the result, which is this life’s job, money and conditions for means of living. So it all came from that cause.

Also our precious human body so that now we can practice Dharma and not be reborn in the lower realms and be able to achieve a higher rebirth, that came from the practice of morality, protecting karma, like abandoning killing, stealing, and, for example, the five precepts or four, three, two or one precepts.

It is possible to have rebirth as a happy transmigratory being, such as a deva or human. This is all received due to having practiced pure morality in the past. All the good things come from holy Dharma, therefore that is the most important thing.

People who have many difficulties and sufferings, this is from not having practiced Dharma. So they haven’t created the causes through charity and morality in the past.

Of course, depending on what we want, even though we don’t have omniscience, if we have ordinary clairvoyance and can see something of the future or past, it is helpful. Then we know what to do, what method to use to achieve what we want, so like that.