Few Students at the Center

Few Students at the Center

A student and teacher at a Dharma center wrote that only a few people were attending teachings and they wondered if it was still beneficial to stay and teach there. Rinpoche sent this letter. 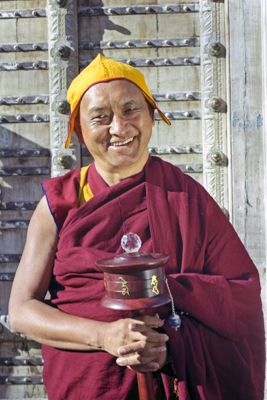 My most dear ones,
Thank you very much your kind letter. Yes, thank you for your clear report. Yes, of course, because people are beginners and also they don’t know all the sufferings of samsara, the different realms, that they have been in numberless times from beginningless rebirths and how they have suffered. They don’t remember it at all, and that they will have to suffer again if they don’t practice Dharma and don’t realize ultimate wisdom directly perceiving emptiness which sees delusions and karma, the cause of samsara.

So they have no idea of the past and future; the future they cannot see and the past they cannot remember. Their mind is so polluted, so obscured, unbelievably obscured, so ignorant, so ignorant. If they knew the past suffering of samsara—that they have gone through each realm’s suffering numberless times—then they could not waste even a minute of this life or even a second. They could not waste it at all, without practicing correct devotion to the virtuous friend, renunciation, bodhicitta and emptiness, and of course tantra and Highest Yoga Tantra with all the benefits. We can achieve enlightenment in one life with Highest Yoga Tantra; in a brief lifetime of degenerate time we can achieve enlightenment.

So the people’s minds are totally distracted, occupied by distractions of this life, not just this life but attachment to this life, to the comfort of this life. If we accept intellectually past and future lives but we think all that is not of particular importance; that achieving happiness in the future is not so important, then it’s very hard. Even if we intellectually accept it, but we think it’s not very important; we think it is very unimportant and instead think about this life’s happiness and achieving that. We think that is the most important thing—to achieve what our self-cherishing thought wants is the most important thing in the life.

Even if only eight people are coming regularly, that is a great thing. You can’t expect lots of people coming; it’s not like when people come to watch bull fighting, putting the spear in the bull and moving the red flag. So don’t expect that many people who want to watch bull fighting will come to class. There are many things, totally meaningless things that people want to do more, things like bull fighting that cause unbearable suffering, particularly to the bulls.

So eight people attending the Basic Program, that is great, and if people continue, it’s possible they will slowly develop, then slowly more people may come. That is very good, but it’s a higher subject so people might not understand, people might think like that.

Basically it all depends on the merits, how great the merits, and collecting the necessary conditions, the merits for success by the center. When I was there, I was thinking what pujas could be done but I don’t remember if I gave the advice and if so, whether the pujas were done or not.

Recently I was in Mongolia and Russia. In Mongolia around 1,500 people came to the teachings and then Russia, in Kalmykia, I was invited by Telo Rinpoche. I don’t think you know him, he is supposed to be the incarnation of Tilopa and he is the representative of His Holiness the Dalai Lama in Russia. He is the main person who builds the temples in Kalmykia. The first temple was a small one, then the second and third one were bigger. He built them and he inspired the people, so he let many people, as they are Buddhist, be involved in the building of the monasteries and also the statues, so then the people have an incredible opportunity and such an easy way to collect merit and purify and so forth. A long time ago he was at Drepung Gomang Monastery, but he disrobed a long time ago.

He told me when Jhado Rinpoche (ex-abbott of Namgyal Monastery) was there, Rinpoche was giving an initiation and fire puja, and they advertised it quite well but not many people came. Then another lama who was very learned in his past life came from Nepal and did a long-life initiation, and because of past life karma so many people came. He was surprised that during my time in Kalmykia around 1,500 people attended. In Russia there were about eight hundred people. I told Telo Rinpoche that being extremely learned in Dharma is not the only thing; you have to have karma with people. That’s what I said.

There was a couple who lived in Dharamsala and then went to live in Hawaii. They lived in Dharamsala when Lama was in Dharamsala the last time, then they left and offered land in Hawaii to start a center. Lama never went there but I went twice, I think. One time I went to visit the center, the first teaching was in the city, they arranged the talk and many people came, but after that there was going to be a two-day teaching on their land. They had a small house on the land and the teachings were going to be in the small house that they had built. I slept in their house, not in the small house, which was for the teachings,

So when the time came for the two-day teachings, nobody came. I gave two days’ teachings to him and his wife and one of their friends and Roger. The husband was a very good carpenter. He made the best altar and around the altar were all the cupboards to put damarus and bells and things you get from Dharamsala, but it didn’t look ugly, it looked all neat.

The conclusion is, as you know, do everything with a bodhicitta motivation, a good heart; do the teachings and do the works for the center for everybody as much as possible.

I have an incredible quotation on teaching Dharma to even one being, but I could not find it in my notes, so when I find it I will send it to you.

The best happiness of life, contentment, everything, patience, everything, dealing with a hard life, everything is best with bodhicitta, living your life with the ultimate good heart, bodhicitta, even if it’s not the realization but effortful bodhicitta. Then there is not only happiness in this life and even at the deathtime. There is happiness up to enlightenment and this causes enlightenment—the cessation of all mistakes of mind, all obscurations, and the completion of all the realizations—in order to free the numberless sentient beings from each realm from the oceans of samsaric suffering and bring them to buddhahood, peerless happiness, the cessation of obscurations and completion of realizations.

Please give those people my best wishes, greetings and love.

* [Note: Khunu Lama Rinpoche's biographies do not mention a journey to Ladakh. This could be a reference to teachings given to Ladakhis in northern India or at the Ladakh Budh Vihar in Delhi.]