A student wrote that her family was interested in building an animal sanctuary. Her daughter always showed deep compassion for animals, including the tiniest insects. She helped insects out of the walking paths so they were not harmed and picked up even the most slimy, biting bugs without any sense of disgust. 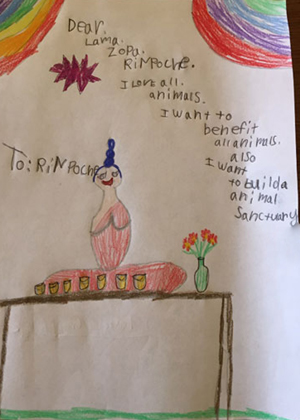 My most dear one,
Thank you for your kind email. If it means saving animals from being killed and from other big troubles, then [building an animal sanctuary] is good. If you do this with a sincere heart it creates a lot of good karma and is the cause for yourself and others to have so much success and happiness from life to life. Your life becomes more and more beneficial for others from life to life and then you go to enlightenment. There are many organizations helping people and it’s good to have an organization that helps the animals also.

There is one man in the Bay Area, USA, who is helping dogs. He was going to build a stupa for the dogs. I went to his place once or twice but I didn’t see the stupa. In Italy there is a group saving different horses and animals, so I gave them a donation of US$1,000 to build a stupa in the center of the property, with a few stupas around, so every day the animals can be taken around the stupas to purify their negative karma and create the cause for enlightenment. This gives them so much opportunity. There are many billionaires in the world, but even they don’t get the opportunity that these animals have. Then there is another student who saves horses from being killed after they have been used and other things. I gave him money to build a stupa but I don’t know if he has built it yet or not.

As you know, at Kopan we have an Animal Liberation Sanctuary, where we have about 50 goats. It took a long time to build it. At the beginning they went far away to look for a place. We had that land, but they wanted to use it for retreat and there was also a problem with the sewage. So they went far away looking for land but finally we built the sanctuary there and sorted out the sewage issue. We built stupas all around the sanctuary for the animals to circumbulate. The goats that are to be killed come from India and then we buy them and liberate them. Other people also liberate goats and bring them to us. We keep the goats at the nunnery for a while before taking them to the sanctuary. Some die, but some are okay.

Now I have a special mantra bag for blessing the animals that I carry with me. Mostly it is the mantra that you put above the door. That mantra purifies 100,000 eons of negative karma. I made a new version of that mantra card to put above the door that has about twenty or more of those mantras. Before it was just one mantra, now there are twenty or more. I think I have 500,000 of that mantra in the bag, as well as OM MANI PADME HUM, Mitukpa, the Four Dharmakaya Relic mantras and more.

I did a blessing here at Root Institute, Bodhgaya, for all the animals and recited mantras for all the goats and chickens. You must know that chickens need to be put in a house when they are liberated. Otherwise if you buy chickens and liberate them, then every day they eat so many worms. But worms are also precious. It is not that chickens are more valuable than worms. Many people have an unbalanced mind. They think one animal is more precious than another, so they feed many other animals to that one animal.

There is also another place nearby called Maitri Animal Care where they rescue many dogs and goats and other animals. I went there to bless all the animals and also the school children from the local villages. They were blessed once by me and another time by somebody else using the mantra bag. We are building a new stupa here at Root Institute for the animals to go around—sorry I should show you a photo, but I don’t have one. Also I used the mantra bag to bless all the workers here and the sick people in the clinic. Putting all those mantras on their heads purifies a few trillion eons of negative karma.

So anyway, as I was explaining, if you liberate chickens you must put them in a cement house and give them food so they don’t have to eat worms. Then if possible you should also bless all their food and water by reciting mantras. This not only stops their hunger and thirst but also blesses their mind. I told the people here that we must make a new house for the chickens and when it was built we covered the whole roof with mantras. The whole ceiling is covered with the Stainless Pinnacle mantra so the chickens are constantly being purified.

At Garsha, in India, where real Chenrezig came from the mountain water and became the aspect of a stone statue, I'm thinking to build houses for sick people. Garsha is a very, very famous place where Hindus and Buddhists go. The Hindus think the statue is of Shiva but they made a mistake from the word—Lokeshvara—which can mean Shiva. Actually it is Chenrezig. There are many, many sick people at Garsha, as well as people who commit suicide. In one house four people killed themselves. So I thought to build a nice small house with the whole ceiling covered in mantras, where people can come to relax. First have the Stainless Pinnacle mantra covering the whole roof, so that when people enter they get purified.

Also there is the Mantra that Liberates from the Bondage of Body, Speech and Mind. We have one nun who cured herself of skin cancer by reciting that mantra 21 times and also by wearing it. I was thinking to put that mantra in bags hanging from the ceiling and when people come into the house they can touch the mantra bags on their heads and that will help them to purify and free themselves from sicknesses and naga harms, etc.

Also yesterday I wrote to the center in Tahiti and explained about building a prayer wheel in the ocean. Many years ago when I was in Taiwan I met a rich family who built many monasteries and talked to them about building a prayer wheel in the ocean that connects with China. I told the family the benefits of the prayer wheel touching and blessing the water that is mixed with the ocean, so that it purifies the negative karma of all the numberless beings who live in the water as well as those who drink the water. The family was so surprised and they kept silent. Later they told me that they became rich by selling fish, so they were thinking to repay the kindness of the fish but didn’t know how to do that. Many Chinese families make their living selling fish, so to repay the kindness by establishing a prayer wheel in the water is so good. It helps all the numberless beings in the ocean to be liberated.

Thank you and good luck.

Note: Rinpoche advised this information is good so people know what to do, especially putting mantras on the roof, and covering the ceiling with the Stainless Pinnacle mantra and the eight auspicous signs, very beautifully designed and well-done. Another mantra that can go on the roof is Mitukpa—large not small— and Namgyalma. Rinpoche also advised that it is very important to have the eight auspicious signs at the center office, for success and to eliminate inauspiciousness.

Read more on this topic in Advice on Benefiting Animals, and Mantras to Benefit Animals by Lama Zopa Rinpoche.  See also Appendix 3 from the book Teachings from the Vajrasattva Retreat.  A book of practices and mantras, Liberating Animals From the Danger of Death,  is available for purchase from FPMT Foundation Store.