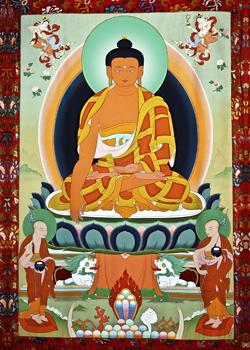 Shakyamuni Buddha (563-483 BC), the historical founder of Buddhism, was born a prince of the Shakya clan in Lumbini, North India. The young prince was shielded from human suffering as a child, but he later ventured out of the palace and saw an old man, a sick person and a corpse for the first time. When he saw a holy man, Siddhartha felt a desire to renounce the worldly life and follow a spiritual path.

Prince Siddhartha was married to the beautiful Yashodhara who gave birth to a son, Rahula, however, the prince decided to go forth in search of a solution to the four sufferings of birth, old age, sickness, and death, so he renounced his princely status and began living a religious life.

Siddhartha  studied with various ascetics and tried to reach enlightenment through extreme practices of pain and self-mortification, but after six years he rejected these practices. To restore his strength after a long fast, he accepted milk curd offered to him by Sujata, a girl from a nearby village. Then, near the town of Gaya, he sat under a bodhi tree and entered meditation for 49 days. He battled Mara, a demon representing delusion, until, with his right hand touching the earth, he attained enlightenment. The site was later named Bodhgaya.

After his awakening, Shakyamuni remained beneath the bodhi tree, contemplating how he should communicate his realization to others. He finally resolved to teach others the way to liberation from suffering, so he went to the Deer Park in Varanasi, where he taught the Four Noble Truths to the ascetics who had been his companions.

Over the next fifty years, Shakyamuni continued to travel through many parts of India disseminating his teachings. During his lifetime his teachings spread not only to central India but also to more remote areas and people of all social classes converted to Buddhism. Shakyamuni passed away into parinirvana in Kushinagara at the age of eighty.

Note:  A buddha (Skt; Tib: sang-gye) is a fully awakened being,  who has totally eliminated (Tib: sang) all obscurations veiling the mind and has fully developed (Tib: gye) all good qualities to perfection. According to  Mahayana Buddhism, there are many buddhas, not just one.