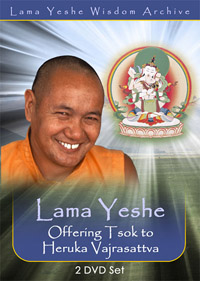 Subtitles in English. You can watch this DVD on YouTube.

Practitioners of the mother class of Highest Yoga Tantra must offer tsok to the guru-deity twice a month. Most perform the Guru Puja in fulfillment of this requirement, but in 1982 Lama Yeshe wrote the Heruka Vajrasattva tsok offering "in case students were getting bored with the older pujas. It's shorter, too, and therefore suits our busy Western lifestyles!"

Lama also said, "Highest Yoga Tantra contains methods by which you can attain enlightenment in a single lifetime, but before you can actualize these you must purify yourself. Practicing Heruka Vajrasattva is one of the most powerful ways of doing so."

In the three teachings presented here, recorded at Vajrapani Institute, Boulder Creek, California, in July and August, 1983—a mere eight months before he passed away—Lama Yeshe explains what the Heruka Vajrasattva tsok offering is and how to do it.

Following the teachings there is audio of Lama Yeshe leading the puja in Geneva, Switzerland, accompanied by a slide show of photos. Originally released on VHS, this new and much-improved release features enhanced picture and sound quality, extra footage at the end and subtitles in English. See Offering Tsok to Heruka Vajrasattva : Puja Audio & Slide Show on our Youtube channel.

These teachings have been published as Becoming Vajrasattva: The Tantric Path of Purification (Wisdom Publications, 1994).