Life, Death and After Death DVD 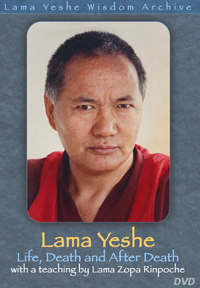 You can watch excerpts from this DVD on our YouTube channel.

The teachings on this DVD are from a weekend seminar on death, intermediate state and rebirth that Lama Yeshe taught in Geneva, Switzerland, in September 1983. The topic is particularly poignant as this was the last teaching Lama gave in the West; he passed away some five months later. But here he was his usual boisterous, punchy, direct, funny, loving and compassionate self, treating death in his incomparable light yet serious way.

Included also is video of Lama teaching on transference of consciousness at the time of death in London the previous year.

The teachings on this DVD set can be found in the book also titled Life, Death and After Death.