Bringing Dharma to the West DVD 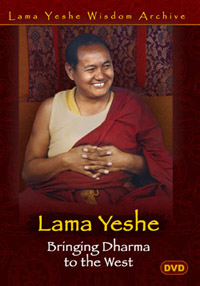 Subtitles in English. Watch this video on our YouTube channel.

In October 1982, after the visit of His Holiness the Dalai Lama to Istituto Lama Tzong Khapa, Italy, which Lama Yeshe arranged, Lama was interviewed on behalf of the Meridian Trust, the Buddhist film and video archive, by Geoff Jukes, Meridian’s founder, and Brian Beresford.

In the first interview, with Geoff Jukes, Lama explains how he and Lama Zopa Rinpoche first began teaching Buddhism to Westerners, how to teach Dharma in the West, the form Buddhism might take in its transition from East to West, the development of the first FPMT centers … and more.

In the second interview, with Brian Beresford, Lama details how the first centers began, what their purpose was, how life in the centers should be, how he selected the resident teachers and what their relationship with the center’s administration should be, how the different aspects of the community—ordained students, lay students and families—should interact with each other, and more.

These interviews offer a fascinating insight into one of the greatest Tibetan masters to come out of Tibet and one of the most effective in bringing the teachings of the Buddha to the world at large. A great inspiration.

These two interviews are now available with Italian subtitles. You can watch Interview 1 and Interview 2 on the FPMT Italiano YouTube channel.