A prayer composed by His Holiness the 14th Dalai Lama for the quick return of Geshe Lhundub Sopa Rinpoche, who passed away on August 28, 2014, at Deer Park Buddhist Center in Oregon, Wisconsin, USA.

Note: This prayer is available for download as a pdf file, with the Tibetan script, as well English and Tibetan phonetics. 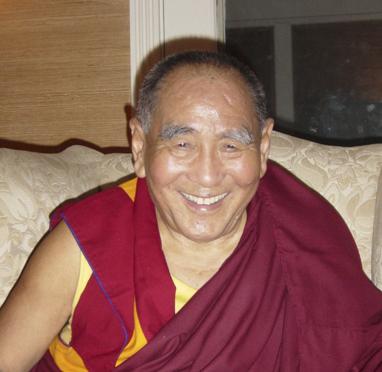 Colophon
The great Geshe Lhundub Sopa having recently passed away, his disciples including the incomparable Jangtse Chöje Lobsang Tenzin; Geshe Tenzin Dorjee, Lhundup Sherab, Lhundup Chowng, other monastics, and the students of Deer Park Buddhist Center; the monks of Sera Je Tsangpa Khangtsen, the monks of Shang Ganden Chökhor Monastery in Tibet and Nepal, Tulku Lobsang Gedun Tenzin, Khentrul Lhundub Chöden, and members of the Frank Tsou and Helen Du family, requested that I compose a prayer for his swift return. Aside from that, because of our own deep connection as guru and disciple, I intended to write a prayer for his swift return. Geshe Lhundub Sopa was a member of the lineage of scholars coming from the 94th Ganden Tripa Lhundub Tsöndrü who was highly regarded by my predecessor, the 13th Dalai Lama. I have very clear memories of the debate with Geshe Lhundub Sopa on the topic of Buddha Nature during the noon session of the Madhyamaka and Prajnaparamita sections of my Geshe examination at the Great Prayer Festival in Lhasa. After coming to India, he did not fail to do anything that I asked of him. Composed by the Buddhist monk, the Dalai Lama Tenzin Gyatso in the Tibetan Royal Year 2041; the 13th day of the 8th month of the 17th Rabjung Cycle Wood Horse year; October 6, 2014 by the Western calendar.

Translated by Sharpa Tulku and Rodney Stevenson with great devotion and fervent prayers for the quick return of Geshe Lhundub Sopa Rinpoche.

Note: 'spontaneous' and 'patience' are the translations of Lhundub  and Sopa respectively. The 'Sun's Friend' is an epithet used for Buddha because Siddhartha was born into the Ikshvaku dynasty which is also known as the Solar dynasty.