Lama Yeshe articulates his intention for universal education in an interview with Ven. Connie Miller at Istituto Lama Tzong Khapa, Pomaia, Italy, in September 1983. The Foundation for Developing Compassion and Wisdom, an international project of the FPMT, grew from Lama Yeshe's vision. This interview was published in Mandala magazine, October 2014. 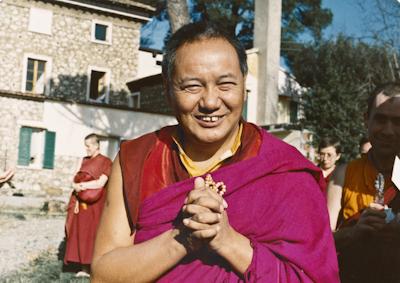 Let me try to explain what Universal Education is and why we need it. The world needs a new system of education because the old one is too dated for the intelligent people of today and produces a great deal of conflict and dissatisfaction in the present generation. I first proposed this project back in the mid-1970s but it wasn’t until last year [1982] that I found somebody to take it forward [Ven. Connie Miller].

The reason I call it universal is that people need to understand the entirety of human reality. Nowadays, most people in the world do not. They don’t understand the totality of their being and they don’t want to accept spirituality. And many of those that do accept spirituality reject scientific reality. This is a common conflict in the Western world. I see it all the time.

As a result, I started thinking that there must be a middle way, whereby people are educated both spiritually and scientifically such that they can take care of themselves physically and mentally and free themselves from any kind of material or psychological problem.

With today’s education system, there’s a lot of knowledge and wisdom but the way it’s presented is too narrow. Students are taught too dogmatically. This dualistic reflection is what brings them into conflict with one another. We can counter this by teaching them the entire lam-rim and even tantra without using any Buddhist terminology. I can do this. You can do it, too.

This new form of education would be free of categorization and, as a result, people would not create what I call a self-pity imagination of themselves, the sort of low self-esteem that we so often see. We would eliminate that and become free, universal beings. We would completely understand our own psychology and our own physical makeup. That’s why I call it universal education.

Buddhism definitely has this universal education quality within it but we need to change our clothes—cut the Buddhist terminology. Don’t use religious Sanskrit words like nirvana, for example, but simple scientific language that is free from any religious connotation or association. We should develop some kind of neutral explanation.

Old, outdated concepts are what lie beneath the human symptoms we see. People project the way they do because they have a narrow connotation of things; they label things in a very narrow way. We have to get rid of people’s old concepts and give them a new imagination; a new, broad way of looking at themselves and the world. That’s what I mean by “universal.”

Then people are going to say, “You can’t do it because you’re not universal. English people can’t do it; Americans can’t do it; Tibetans can’t do it because they’re from Shangri-La in the Himalayan Mountains and up there nobody knows what’s going on in the world!” So then it comes down to nobody being able to do it. That’s wrong too. We do have a clean-clear vision of what we want to do, what we should be.

So, there’s no requirement that Universal Education students have to take ordination as monks or nuns. Far from it, anybody in the world can become a student of universal education—monks, nuns, laypeople, married or single; everybody.

This is because Buddhism contains teachings on both the universal attitude and the nature of universal reality. So we need to take these teachings and shape them such that their language is intelligible to people the world over. That is important. That is the way in which we can contribute. And our students are the main resource for putting this into action. They have a realistic point of view and the dedication to make it happen, to help others to understand.

That’s why I’ve always said that Universal Education covers lifetimes from birth to death and even extends into future lives. We can educate children, people who are dying and everybody in between. This is what we have to plan for. We should start gradually, but at the same time be clear about our long-term aims.

Also, putting this plan into action should be practical and realistic, not merely intellectual. Start small with something for children expressed in simple language that nevertheless gives them a deep understanding of human potential, and progress from there, step by step. Contribute to the process by producing A, B, C, D books written by our students as a resource. People will listen and, slowly, slowly be inspired, especially when they see the benefits.

Of course, I’m looking into the distant future, many generations forward. For us, it’s over. We’ve already had our childhood education. We’re too old. But we have to think about today’s children, babies and those who have not yet come into their mother’s womb. We need to have great concern for the coming generations. Don’t think there’ll be no future because the world’s about to be destroyed by a nuclear holocaust. Don’t worry; that’s not going to happen. New children are coming.

However, to make sure that we don’t lose the essence of the Dharma when creating these new programs, we need very skilled and knowledgeable Dharma students on the Universal Education board and writing teams. We also need experienced regular teachers because just because we’re doing this doesn’t mean we’re completely throwing out the old education system. We use the old system but take out the words that make people narrow and closed and reshape and flavor them to give students a deeper understanding of human nature.