The Twelve Links of Interdependent Origination

This teaching was given at Tushita Mahayana Meditation Centre on April 11, 1980. It was translated by Gonsar Rinpoche. First published in Teachings at Tushita, edited by Nicholas Ribush with Glenn H. Mullin, Mahayana Publications, New Delhi, 1981. Now appears in the 2005 LYWA publication Teachings From Tibet. 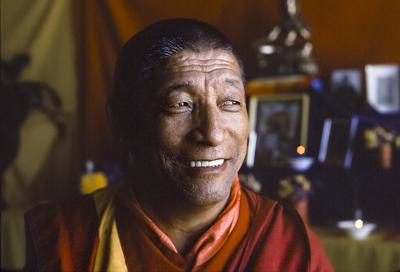 Dharma practice entails more than just calling yourself a Buddhist or making superficial changes in the way you live your life. It means totally integrating the teachings with your mind.

To integrate the teachings with your mind, you must first prepare yourself by cultivating spiritual stability—pure renunciation—within your stream of being. The Tibetan term for renunciation, nges-jung, implies that you must first realize that you are caught in the process of rebirth in samsara, a state of being characterized by a great many sufferings. Therefore, at the beginning of your practice you have to realize the true nature of samsara itself and how you exist in it; you must become acutely aware of the unsatisfactory nature of samsara, the condition in which you find yourself. This is very important.

Once you have recognized the true nature of samsara and become sufficiently disillusioned with it, from the depths of your heart you will generate the spontaneous aspiration to liberate yourself from it. This pure, spontaneous, constant aspiration to be free of samsara is renunciation.

The first of the twelve links is ignorance, the root of all samsaric suffering. The Sanskrit term, avidya [Tib: ma-rig-pa], means “not seeing” and implies an obscuration of mind. To explain precisely what this ignorance is and how it functions requires a great deal of time and energy, so let’s just focus on the general principles instead.

When we go to teachings, for example, we have the intention, “Today I’m going to go and listen to teachings.” Whenever we think like this, we all have a certain conception of our “self,” or “I.” Buddhism calls this sense of self the ego. Our ego is with us at all times and becomes more obvious on certain occasions, like when we encounter highly favorable circumstances or great difficulties. At such times our sense of self becomes more intense and visible than usual. Each of us is subject to our own conception of “I.” We can see it quite easily in our daily experiences without need of lengthy, theoretical reasoning.

Whenever our ego-concept arises very strongly, it grasps us as if it exists within us as something very solid, very vivid and totally uncontrollable. This is how the false self grasps us. However, it is important to contemplate whether or not this “I” really exists as it appears. If we search for it within ourselves, from the top of our head down to the soles of our feet, we’ll come to the conclusion that neither our physical body nor any of its individual parts can serve as the “I” that under certain circumstances arises so strongly. Nothing in our body can be the “I”. Our limbs, organs and so forth are only parts of the body, which, in a sense, “owns” them.

If we analyze our minds in the same way, we’ll find that the mind is nothing but a stream of different thoughts and mental factors and conclude that nothing in the mind is the “I” that we conceive either.

Moreover, since there’s no separate entity outside our body or mind to represent the “I,” we can conclude that the self that we normally feel doesn’t exist. If we meditate like this, we’ll see that it’s true that the “I” can’t be found. However, this doesn’t mean we don’t exist at all. Non-existence cannot be the answer, because we’re analyzing how we exist.

Actually, the situation is very subtle. We neither exist as simply as the ignorant mind supposes, nor do we not exist, and gaining an understanding of the true nature of the self requires thorough training and sustained meditation practice.

The mental factor that holds the wrong, fabricated view of the self is what Buddhism means by ignorance, the first of the twelve links of interdependent origination. All the other delusions—such as attachment to ourselves, our friends and possessions and aversion to people and things alien to us—rest on the foundation of this false concept of the self. Acting under the influence of such attachment and aversion, we accumulate much unwholesome karma of body, speech and mind.

The distorted actions of body, speech and mind that arise from ignorance, attachment and aversion stain the mind with what are called volitional formations. This is the second of the twelve links. The moment after we create a distorted karma, the action itself has passed and is gone, but it leaves on our stream of consciousness an imprint that remains there until it either manifests in future as a favorable or unfavorable experience, depending on the nature of the original action, or is otherwise disposed of.

The continuity of the mind stream serves as the basis of the imprints of karma. This is the third link, the link of consciousness. It carries the imprints and later helps them ripen and manifest in the same way that seeds are sown in the earth, which then serves as a cause for the growth of a crop. However, not only must seeds be sown in the ground; they also require favorable conditions to grow. Contributory causes such as water, fertilizer and so forth must be present in order for the seeds to ripen and reach maturity.

The attachment that evolves from ignorance helps condition the karmic seeds sown in our stream of consciousness. This particular attachment, which is called craving, is the fourth link.

There also exists in our mind stream another type of attachment, called grasping, which has the special function of bringing karmic seeds to fulfillment. This is the fifth link of the twelve-linked chain. It manifests at the end of our life and conditions the throwing karma that gives rise to our next rebirth.

Although both above types of attachment have the nature of desire, each has its own function. One helps to ripen karmic seeds; the other brings them to completion and connects us with our next life.

The sixth link is becoming. At the end of our life, a throwing karma arises and immediately directs us towards our future existence. This special mental action that appears at the final stage of our life is called “becoming.”

These six links are generally associated with this life, although it is not necessarily the case that they will manifest in this life. In particular, some situations may develop in other lifetimes, but in most cases they belong to this life.

As we near death, our body and mind begin to weaken. Bodily strength and the grosser levels of mind dissolve until finally we enter a level of consciousness that the scriptures call the clear light state. This is the final stage of our life, the actual consciousness of death—the most subtle level of mind. We remain in this state for a certain time, then there occurs a slight movement of consciousness and we enter the intermediate state—our mind shoots out of our body and enters the bardo, the realm between death and rebirth.

The intermediate state has its own body and mind, but the body is not made of the same gross elements as ours. Therefore, bardo beings do not have the gross form that we do. The bardo body is composed of a subtle energy called “wind,” which exists in a dimension different to ours. We should not think that this is a wonderful or beautiful state, however, for it is characterized by great suffering and difficulty. We undergo a total loss of free will and are driven here and there by the force of karma until we finally find an appropriate place of rebirth. The beings in this state subsist on smell rather than on ordinary food and it is this search for food that eventually leads them to seek rebirth. After a certain period in the bardo state they take rebirth in accordance with their karma.

There are many different realms into which we can take rebirth and each of these has its own causes and conditions. For example, to be born human, our future parents must unite in sexual union, their white and red cells (sperm and ovum) must combine and enter into the womb of the mother, and so forth. Then, when the bardo being, driven by the force of its individual karma, reaches its karmically determined parents, certain circumstances arise bringing to an end the life of the bardo being, upon which its mind enters the conjoined cells of the parents.

The moment the wind leaves the bardo body and enters the united cells of the parents, the link of rebirth is established. This is the seventh link. Mere union of the parents, however, is not a sufficient cause for engaging this link. As well, the womb of the mother must be free of obstacles that could interfere with the birth of the child; the material causes of the physical body of the child, that is the parents’ sperm and ovum, should also be free from defects; and the three beings involved must have a karmic connection with one another in order to establish this kind of father-mother-child relationship. When all these circumstances are complete, rebirth takes place.

From the time the link of rebirth is established until the sensory organs of the child are developed is the eighth link, which is called name and form. The material substances that constitute the sperm and ovum of the parents are “form”; the consciousness that dwells within that material basis is called “name.”

After the sense organs of the child have developed into a mature, functional state, the ninth link, that of the six senses, arises. This is like the construction of a building in which the finishing work, such as windows and doors, has been completed.

The tenth link is contact. After the sense organs have evolved they function through the sense consciousnesses to establish contact with outer sense objects, such as visible forms, sounds and so forth.

All this produces the aging process, the twelfth link of the chain of interdependent origination, which eventually finishes with our death.

We are all trapped in this process of repeatedly circling on the wheel of birth, aging, death, intermediate state and rebirth. It is not something special that applies to only a few beings or something that happens only to others. It is a process that embraces every one of us. We are caught in cyclic existence and experiencing the twelve links every moment of our existence.

It is very important to contemplate this. If we become fully aware of this constant process of evolution, we’ll come to a correct realization of the problems of samsara.

Meditating on this, we’ll gradually generate the sincere aspiration to achieve liberation. That aspiration is pure renunciation. However, merely having that aspiration is not enough; we must put great effort into practicing the methods that bring about liberation. On the one hand, we need the help and guidance of the objects of refuge, but from our own side, we must learn and put into practice the actual methods that have been taught. Through the combination of these two, we will attain liberation from the sufferings of samsara.

2. See His Holiness the Dalai Lama’s The Meaning of Life for a book-length teaching on the twelve links.

3. A discussion of how modern developments such as artificial insemination, in vitro fertilization and so forth impact upon this traditional description of conception is beyond the scope of this book.