LYWA Multimedia: A Tribute to Lama Yeshe, Wisdom Magazine No. 2

In 1984, shortly after Lama Yeshe passed away, Wisdom magazine published a commemorative issue in honor of Lama's life and work. This special issue of the magazine features thirty pages of tributes, teachings, poems and photographs. Wisdom magazine was the precursor of FPMT's Mandala magazine. 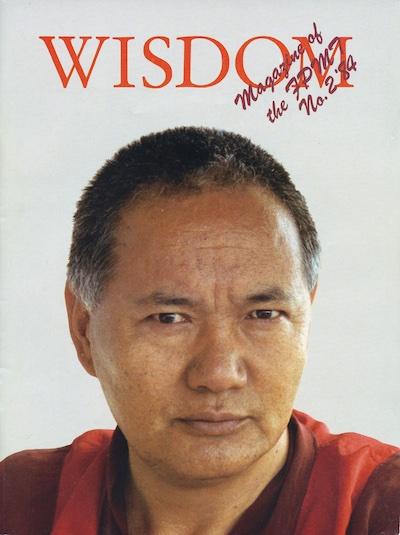 Some twenty minutes before dawn on the first day of the Tibetan New Year—March 3rd 1984—the heart of Lama Thubten Yeshe stopped beating. He was forty-nine years old. This great yogi and teacher was an extraordinary man who moved the hearts of thousands during his fifteen brief years among Westerners.

This commemorative issue of Wisdom Magazine features an account of Lama Yeshe's last days and funeral, an address to funeral attendees by Lama Zopa Rinpoche and tributes by Rinpoche, Geshe Tegchok, Geshe Jampa Gyatso, Geshe Sopa, Father P. Bernard de Give and students. Also featured in this issue are two teachings by Lama Yeshe, tributes to other great lamas who had recently passed away, and FPMT news from around the world.

Click here to read the special issue of Wisdom magazine.

You can also visit multimedia.lamayeshe.com to find the free collection of all LYWA multimedia titles.