Transforming the Adverse Conditions of the Coronavirus into the Path

This supplication was composed by Khadro-la (Rangjung Neljorma Khadro Namsel Drönme) on March 30, 2020, at the request of friends around the world. Translation and notes by Fabrizio Pallotti. The prayer is freely available for download as a PDF, kindly produced by Piero Sirianni.

Khadro-la's advice includes the practice of The Inseparability of the Spiritual Master and Avalokiteshvara, a sadhana composed by His Holiness the Fourteenth Dalai Lama. 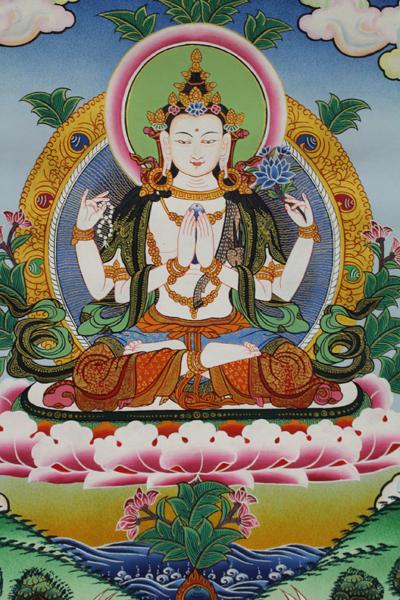 Due to the karmic appearances of sentient beings in this degenerated bad time, the world is pervaded by a pandemic disease. We have fallen into a prison without shelter and without hope, isolated, without protection and without an army we cry out in despair.

The epidemic has turned heaven and earth upside down: I ask the buddhas of the three times2 to listen to me.

I reveal openly that, because sentient beings cling to a self while the self does not exist, externally the elements are disturbed.

I reveal openly that, due to the hallucinated mind grasping at true existence while true existence does not exist, beings earnestly indulge in the three poisons.

I reveal openly that, controlled by the black poisonous snake of self-conception, we act for our victory, while pursuing the defeat of others.

This hallucinated mind grasping to a self and true existence, conceives samsara perfections as if they were a pure refuge. Suddenly the deadly epidemic comes, the graveyard of the maturation of actions, and the samsara perfections, like dirt and stones,3 become devoid of happiness: the time has come for great affection and great compassion.4 The experience of ripening in accordance with causes and their effects5 is certain, the dependent relationship is undeceiving.

After realizing that dependent arising does not exist intrinsically, bless me to see the reality of the mind.

Controlled by the hallucinated mind that conceives a self that does not exist, the chronic sickness of selfishness that protects friends and eliminates enemies, destroys this and future lives in a continuum of suffering like the ripples of water. Not understanding that sentient beings are our mothers and their kindness, we act with ingratitude:7 this I reveal openly.

I reveal openly that, after entering the cycle of pure Dharma of the vajra vehicle, I have degenerated the samayas received through initiation.

Vajradhara,8 from the sphere of Dharmakaya without elaborations, you are the precious treasure that fulfills all desires and needs. Vajradhara, white lotus of emptiness and compassion, venerable pervading all families,9 Illuminator of the three times,10 you are the only refuge11 that eliminates the darkness of ignorance. You are the Buddha,12 but I considered you a normal human being: this I reveal openly.

Though I have received the teachings of infallibility of action and results, like performing a theatrical act I wear the mask of Dharma while relying on wrong livelihood:13 this I reveal openly.

I reveal openly that, although there is no other refuge but the three rare and supreme, I relied on non-Buddhist teachings.14

I reveal openly that, although there are various vehicles within the pure Dharma, I let the mind pursue the erroneous views of psychology.15

I openly reveal that, although the freedoms and endowments are difficult to obtain and are highly meaningful, the useless activities increase.

I reveal openly that, although I possess the wisdom of the primordial mind,16 I do not see that my mind is the dharmakaya.

Not understanding how appearances arise from the base,17 I regard dharmakaya and nirmanakaya as newly produced:18 that I openly reveal.

In short, for the strength of the Lama’s kindness19  may I realize that all appearances of samsaric beings are devoid of true existence, always free, self-liberated, directly free.20

Lama Vajradhara, you are the embodiment of all three roots, you are our only refuge and hope satisfying all wishes. From the magical illusion of the three supreme bodies, precious omniscient compassionate,21 I beg you to pacify epidemics, famines and wars.

In the state without referent I reveal all the negative actions of the three doors of us sentient beings affected by ignorance.22 Though the confession, who confesses and the object of confession do not exist,23 I confess as an illusion,24 in the state of non-intrinsic nature.

Compassion, altruism, and the mind of enlightenment are the precious riches that do not deceive.

Rest assured that the Dharma is solely to pacify yourself and benefiting others. Stop worrying! If you rely on powerful deities,27 all suffering becomes an aid to happiness. Never separate yourself, even at the cost of your life, from the refuge of the three rare and supreme ones, who do not deceive.28

Faith and compassion are the foundation of all that you desire, do not be afraid! Make requests from the bottom of your heart. Ask continually for blessings the lama deity.

If you recite the mantras Mani, Benza and Tare,29 with request, you will certainly free yourself from all obstacles.

May there be the auspiciousness of the Lama and the Three Jewels!

May there be the auspiciousness of reality free from denial and affirmation!

May there be the auspiciousness of happiness of sentient beings, the mothers!

May there be the auspiciousness of seeing the compassionate lama!

May there be the auspiciousness of spontaneous fulfillment of the four enlightened activities!

May there be the auspiciousness of seeing and hearing the excellent path of liberation!

May there be the auspiciousness of complete prosperity!

Right now, due to the coronavirus pandemic disease that has spread throughout the world, human beings are afraid of losing their lives and suffering of multiple losses, such as financial loss. Therefore, just like one family, the beings on this planet are all experiencing great torment together.

I have been asked what could be done to quickly bring this disease to an end. My advice is to practice the Guru Yoga of the Supreme Arya who has the Lotus in his Hand (Chenrezig) inseparable with the one who embodies the great compassion of all the Conquerors, the manifestation of the union of emptiness and great compassion, the revealer of the three times (His Holiness the Dalai Lama).

In particular, to quickly eliminate the disease, I think it would be of great benefit if Tibetan and allopathic medicine, in combination, sought a remedy or vaccine. As for myself, being a Buddhist, I make intense requests to the three rare and precious ones, which are infallible, and I practice as much as possible the four enlightened activities combined with prayers.

After having received sincere requests from many friends from around the world, I have composed this writing on March 30, 2020.

A few days ago, at night, I got this text in Tibetan on WhatsApp. I immediately understood that it must have been important, since Khandro Rinpoche herself sent it from her private number. Upon reading it, I also understood how profound and vast is the meaning enclosed in these few words. Thus, I thought, in order to be able to translate even roughly, required explanations. So I immediately replied thanking the kind Guru and I also sent Her a message asking if she could be so kind as to read the text together with me and provide explanations as well.

My request was immediately accepted, just like Mother Tara who immediately responds to the requests of her children, we the sentient beings. For more than an hour, again via WhatsApp video, I was able to listen and clarify many of the difficult points of the text. I noted the explanations of the difficult passages in the footnotes. Being unable to absorb and understand the profound meaning of each syllable uttered by Guru Tara, I am sure that my translation cannot perfectly reflect the vastness of the meanings expressed by Her words. For this, I offer my sincere apologies.

However, the general sense of the text and the important meaning is certainly conveyed. I hope it will offer all Dharma brothers and sisters great help during these difficult times and for the future ahead.

2 Three times: past, present and future. [Return to text]

3 What is considered happiness until then, has become useless. [Return to text]

4 The time has come to be protected. [Return to text]

5 The ripening of action results is certain. [Return to text]

6 Though it is like a dream, ordinary beings grasp it as true and generate attachment as it was extremely precious. [Return to text]

7 Instead of feeling gratitude for beings who are our kind mothers. [Return to text]

8 Vajradhara Lama. Ogyen Rinpoche, who embodies all the buddhas of the three times who have assumed that aspect, is His Holiness the Dalai Lama. [Return to text]

9 The families of the buddhas are enumerated in different ways, the 100, six, five or one as Vajradhara, embodiment of all buddhas.. [Return to text]

10 Eliminate the sufferings of the three times, past, present and future. [Return to text]

11 The only refuge for the suffering beings is you alone, incarnating all buddhas, the essence of emptiness and great compassion, His Holiness the Dalai Lama, the supreme emanation Lama. [Return to text]

12 Though he is indeed the Buddha, I regarded him as an ordinary human being, like myself, only because he appears or I see him as a human being. This I confess. [Return to text]

13 Many act in this way under the pretense of being Dharma practitioners. [Return to text]

14 The only infallible refuge are three rare and supreme ones, yet I still rely on others who are not buddhas. In this way one abandons the Dharma which is the union of compassion and emptiness. [Return to text]

15 When I asked whether this passage actually refers to Western psychology, Khandro Rinpoche laughed and said that some people first consider the teachings of Buddha as very important and then, not being able to draw real value from the practice, think that are not so valuable and prefer Western psychology. Laughing she went on to say that they don’t realize they are the ones not practicing correctly while thinking that it is the Dharma that is of little value. So they turn to Western psychology thinking that it is of much greater value. They don’t understand emptiness and find it easier and more effective what is in fact a conceptual distraction in comparison. [Return to text]

16 In the sutras this is the seed of Buddha, the element of tathagata, in tantra it is the ultimate nature of the mind of emptiness and compassion. [Return to text]

17 This refers to the nature of the mind as explained and shown in the fourth initiation, the nature of dharmakaya, purity beyond suffering. The basis are the environments like the mandala and the beings that are contained in these as deities. Together with the mind of enlightenment and emptiness, all appear from the mind itself. Mandalas and deities are not created as new. These are the very special and uncommon aspects of the vajra vehicle, the secret mantra. [Return to text]

18 Their nature is already present in us, but not seeing this reality we think they are produced separately outside of us, as new. This is the great contradiction I confess. [Return to text]

19 This is because it is necessary to rely on a lama with experience, able to show the ultimate nature of emptiness. [Return to text]

21 His Holiness embodies all buddhas and bodhisattvas. [Return to text]

22 I make this confession while understanding emptiness. [Return to text]

23 Though they are not inherently existing. [Return to text]

24 The nature of happiness and suffering is like an illusion, in that nature I confess. [Return to text]

25 These are her advices for friends and acquaintances. [Return to text]

26 The union of emptiness and compassion, the ultimate truth of bodhicitta, the dharmakaya, the purity of the three secrets, dharmakaya, sambhogakaya and nirmanakaya present in us. [Return to text]

Transforming the Adverse Conditions of the Coronavirus into the Path