Training on the Tantric Path

This is an excerpt from Lecture Two of the course. Lightly edited by Sandra Smith. 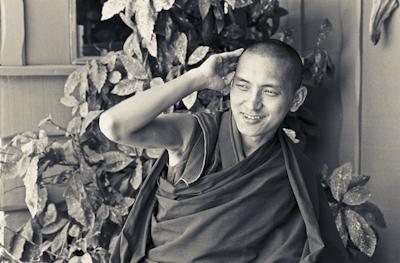 It is on the basis of the common path that we practice the higher tantra in order to achieve enlightenment as quickly as possible. Receiving the four initiations, which have the full characteristics, from the perfectly qualified right vajra master, causes our own mind to be ripened to meditate on the Maha-anuttara Yoga Tantra path. We meditate on the generation stage, which has two levels, the gross and subtle generation stages and then on the completion stage—the graduated completion stage —which has five stages. One way of counting the stages is (1) the isolation of body, (2) the isolation of speech, (3) the isolation of mind, (4) clear light and (5) the illusory body and the unification. If a person is able to actualize the clear light in this life, which is the direct cause of the holy mind, the dharmakaya, then that meditator can achieve enlightenment in this body, in this one brief lifetime of these degenerated times. Within a number of years that meditator, that practitioner of the Maha-anuttara Yoga Tantra path who has actualized the clear light, can achieve enlightenment.

We can complete the generation stage that is preliminary to the graduated completion path, and then by completing this completion path, we can achieve full enlightenment, the unification of the holy body and holy mind, that which is no more learning. Then, after having achieved this enlightenment, which has seven qualities or limbs, which is the state of Vajradhara; by having achieved this, then until every single numberless sentient being is brought to enlightenment, we manifest spontaneously without any effort, with holy body, holy speech and holy mind, in billions of billions, numberless, forms, according to the karma, to the level of mind of the sentient beings perceiving them, and then we lead them from suffering to happiness, then to liberation, then to enlightenment. Not only doing the actions of the holy mind, but also doing the actions of the body and speech—even with this body, doing the actions of the holy mind and the holy speech. It’s the same thing with the speech: the speech can also do the function of the body as there are many manifestations of the holy speech. This is not like our current body, speech and mind. Our body cannot do the function of the mind; our mind cannot do the function of the body; it is very limited. It’s not like this.

Generally in life the first meditation to train in, until we achieve the realization, is guru devotion. Then, on top of that, if we have time to practice another meditation on the same day, we can do the graduated path of the lower capable being. Then, if we can still meditate, on the basis of those two, the other thing to establish is one-pointed concentration, either with tantric practice, such as the generation stage or completion state, or tum-mo, using the tum-mo fire as the object to achieve one-pointed concentration, shamatha, calm abiding, either the actual one or the similar one. Or, we can do this with the generation stage.

In this way, by relating this to tantra practice, with one effort two achievements are possible. One effort, at one time, and we have the possibility of two achievements, two realizations. One is the realization of the generation stage from the Maha-anuttara Yoga Tantra path. The other is shamatha, calm abiding, either the actual one or the similar one, whichever way we can achieve one-pointed concentration. It’s the same thing with the Six Yogas of Naropa, where there is the possibility of achieving all the realizations, or at least one—we can try to achieve one-pointed concentration, calm abiding, or the other meditation is emptiness. We can try to have the realization of emptiness without relating to the tantra path, without combining it with the tantra path, or the other way is to meditate on emptiness by combining it with the tantra path.

This is how to guide our own mind on the path to enlightenment, how to develop our own mind in the lam-rim. First we begin by becoming familiar with all of the lam-rim subjects and the outline, as I mentioned before.

The question at the beginning, as Robert mentioned, about dividing lam-rim subjects in the retreat, doesn’t matter. [Rinpoche laughs] In the past, many years ago, doing the lam-rim retreat after the course, the whole lam-rim meditation was completed within three days. The whole lam-rim meditation—the graduated path of the lower capable being, the middle capable being and the higher capable being —was completed within three days. Then again, you can carry on like that during the one month retreat. You can carry on like that.

The last thing, as Manjushri, the embodiment of all the buddhas’ wisdom, advised Lama Tsongkhapa, is the question of how to quickly achieve enlightenment. Manjushri explained how to integrate the practice like this. Accumulating merit, which means mandala offerings and so forth, then the practice of purifying the obstacles, reciting the Vajrasattva mantra and so forth, then one-pointedly requesting to the guru in order to receive blessings. With this, then training the mind in the lam-rim, which is the actual body of the practice. The three others are often seen as the preliminaries. In this sense, it may not be correct. It can also be said this way, that these three other practices and then the mind training on the lam-rim, this is the actual body of the practice. By integrating the practice like this, we can achieve enlightenment quickly. This is what Manjushri, the buddha of wisdom, advised in answer to Lama Tsongkhapa’s question. How to be successful in developing the mind on the path to enlightenment is contained in Manjushri’s advice.

The whole rest of the path, from the beginning of the path, the perfect human body, up until enlightenment, actualizing the whole path, the whole success—all these practices depend on the very root, correctly devoting ourselves to the virtuous friend with our thoughts and actions. It all depends on knowing the teaching, knowing what the Buddha taught, what Lama Tsongkhapa taught, what those pandits, those yogis have explained, by knowing the teaching of how to correctly devote to the virtuous friend. The whole success, up to enlightenment, depends on this way, which is the root of the path to enlightenment.