Teachings from the Thousand-Arm Chenrezig Retreat (Audio and Unedited Transcripts)

These recordings are from teachings given during the Thousand-Arm Chenrezig Retreat in Taiwan in February-March 2001.

Click on the links above to listen to each section and read along with the unedited transcript. 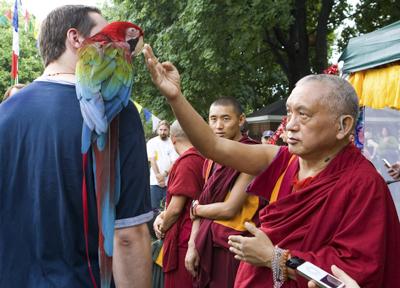 ... the earth, then protection wheel, and then blessing oneself.

I didn’t see a particular text for the Compassion Buddha to, how to begin the retreat, so, the order got, little bit the order become messy, the order.

So you just think, just meditate on emptiness, the obstacles for retreat. For the retreat to be effective, to be able to actualize great compassion, bodhicitta. This is the main purpose for the retreat. To have these realizations, that’s the main purpose of the retreat. Because if that happens, then you can benefit to all sentient beings. You can liberate from the suffering and causes and bring them to enlightenment.

So think like this, meditate like this. All the obstacles, inner and other obstacles for the retreat…. When you think of the obstacles, appears something real obstacle, existing from its own side, appearing from its own side, so then, so this, then think, all these obstacles, so you point on those obstacles, that which appears inherently existent and that you believe it’s true. So totally nonexistent, all these are hallucination. They’re totally nonexistent. So then meditate on that emptiness. Intensely concentrate on that emptiness.

If you meditate on emptiness, and look at the obstacles, empty, and then this becomes the most powerful one, purifying obstacles and also the gektor, giving torma to the interferers.

Does everyone have the Heartspoon?

That book, besides the plate and spoon.

[Rinpoche has an inaudible discussion with the translator and someone else, something about a book published by the foundation.]

Do many people have that?

[The translator explains that the book is a compilation of Calling the Guru from Afar and something else.]

This is the ?sub ticket, ticket to enter in the liberation.

Anyway, so maybe this time we do this, we just motivate this way.

Motivation for the retreat.

Shakyamuni Buddha happened in this world, but he left the holy body, passed away in the sorrowless state. And then many such as the six ornaments, those great pandits, those great holy beings happened, who propagated so much Dharma, and then many yogis happened on this earth, already left.

So many already, among them, so many passed away.

Then among the friends, among the people that you know, many passed away. They died.

So now this, this motivation that I’m going through, this is, here I’m doing for the retreat but this is a motivation, if you can, this is how you, the first thing in the morning what to think. This the first thing in the morning motivation for the life. So it depends up to you yourself how much you want to elaborate and how much you want to do, you can do essence or elaborate. Middle way, elaborate way, essence, on the basis of this. It’s a very good way of beginning your life, beginning of your day. Then also when you begin a retreat, it also will help, future, when you do different retreat also this is the way, after all these preliminaries finished, then also, then you have to do motivation, that’s the way to start.

So therefore, it might helpful, to be able to write down or, however, to pay attention, so it might be helpful for your daily life practice, not only for retreat. How to transform the mind into Dharma.

Then, that, in this world, people who were born the same day as yourself, so many already died.

People that one knew, then family members, they died, so, those whose negative karma is not purified, so, already died and in the lower realm, who didn’t have chance to practice, died, already died, and born in lower realm. Hell, hungry ghost, animal realm.

Or I was born as a worm and bird came, and bird, with a sharp beak went through the body and half body in the mouth of the bird’s beak, half body inside, half outside. No way to escape. Could be like that now, being eaten by a bird.

I could be a fish right now and somebody caught. Somebody caught and cutting, while it’s not completely dead cutting the body in pieces with the sharp knife. I could be.

I heard there’s oil you put and then delicacy.

I could be in somebody’s mouth right now being in shell, the tiny body, small body, put in person’s mouth, just then being bitten between the teeth, and about to go through the neck, crushed. I could be like that.

/like when you find a $1000 or a $1,000,000 dollars, when you win from lottery or something, miracle, something. So here that’s nothing, even a billion dollars is nothing. Even a zillion, trillion dollars is nothing. But here, every second that I’m not in the lower realms, and being in human realm is so precious. Unbelievable. So there, [pause] so precious, ?that ?this ?life.

That this life has many harms, the commentary of that, the meaning of that is, so many harms, 424 sicknesses, and then the spirit possession, dön, there are 360, then interferers, 84,000, the 80,000. There are so many harms like this in the life.

So life is more impermanent than a water bubble.

For example, even last night, when we were sleeping, so many people yesterday went to bed but died, unable to be human being this morning. So many people in this world they went to bed and died during the night.

So, as the Bodhicaryavatara, Shantideva said, even a negative karma committed in one second, one has to abide in the unbearable hell realm, means the number eight, the heaviest, which has the heaviest suffering among samsara, samsaric suffering, heaviest, the last one, the length of life is one intermediate eon.

So therefore, one negative karma done in one second, makes to, can affect that, then no question, negative karma collected from beginningless rebirth up to now, no need to say. So it means inconceivable number of eons to be in that hell realm, one has created the karma, negative karma. Such examples, yeah like that.

Anyway, so doesn’t have to say example, so like that.

So that contains, destroying it, destroy that means, every, so by recognizing that as your great enemy, great demon, and then everything whatever you do, not only praying, meditating, but any action, eating, walking, sitting, sleeping, any action you do, everything is used to destroy the ego, self-cherishing thought. Antidote.

Especially, when people criticize you, put down you, when you failed in something, failed in business, failed in Dharma practice, failed in retreat, doing a retreat, unable to do retreat, obstacles happened, or sicknesses, spirit harm, black magic, other people abusing, whatever, so you, all this you use it like an atomic bomb to destroy your ego, self-cherishing thought. Whatever undesirable thing happens to you in your life, immediately, without delay, you use as weapon to destroy the self-cherishing thought. So destroy has these meanings. Most practical practice to transform the problems into happiness.

Cherishing Others, Bodhicitta Motivation, Oral Transmission of Chenrezig Mantra and Heartspoon »
+ View all Teachings on this topic
+ View All Teachings

Retreat Preparations, Impermanence and Death
Cherishing Others, Bodhicitta Motivation, Oral Transmission of Chenrezig Mantra and Heartspoon
Importance of Faith, Offerings
Offering to the Guru, How to Dedicate Merit
Meaning of Guru and Lama
Rejoicing, Dedications, Food Offering
Retreat Advice, What is Dharma
Offering Tormas, Dedications
Use of Damaru, Bell, and Vajra, Bodhicitta Motivation, Offering and Dedication