Teachings from Singapore, 2009 (Audio and Transcripts)

Excerpts from teachings by Lama Zopa Rinpoche, given in Singapore in January-February 2009.

Includes a talk on how the Kopan courses began. An edited version of this talk can be read in the April 2009 issue of Mandala magazine. 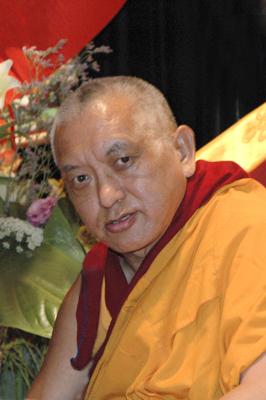 How Karma Comes from Ignorance: Part A

Can read the last part of the English, okay.

A star, a mirage, the flame of a lamp,
An illusion, a drop of dew, or a bubble,
A dream, a flash of lightning, a cloud—
See conditioned things as such!

Through these merits may sentient beings
Attain the rank of all seeing, subdue the foe of faults,
And be delivered from samsara’s ocean,
Perturbed by the waves of aging, sickness, and death.

So this verse which is mentioned by Buddha, and the end of the Diamond Cutter Sutra, this verse comes there, in the Diamond Cutter Sutra teaching, at the end, so looking at the causative phenomena, all the phenomena which are causative phenomena, then meditating on their nature, looking at them in their nature, the false, and reality, and nature of impermanence, they do not last, constantly decaying, changing and decaying, not only decaying day by day, hour by hour, minute by minute, second by second, even within second the subtle impermanence, even within second, they do not last, they decay even within a second, not only second by second, but even within second, so that do not last, they decay, so that constantly this is their nature.

So, particular what we should concentrate on is this causative phenomena, your own life, one’s own life including this, including I, these aggregates, this body, possessions, surrounding people, family members, friend, enemy, strangers, particularly these are the subjects to causative phenomena, particular we are to remember, so looking at their nature, that which appears something, appears to you something else, but which doesn’t exist, all these things, and the reality is something else, emptiness, reality, their very nature is emptiness, empty of how they appear to you, and empty of how we have been believing, how we have been holding on to, holding on to things, empty of that. So these phenomena are empty of how they have been appearing to our hallucinated mind and empty of how we have been believing at them, how we have been holding onto them, all the time, so empty of that, that’s what it’s saying, empty of that, so that part is the false, so that’s, all the, this is our biggest problem and all other problems, problems of the attachment, problems of the anger, problems of the ignorance, jealous mind, pride, all the doubts, problems with all the emotional minds. So this is the basis, comes from this, the way the phenomena appear to one’s own hallucinated mind, appeared false, which is not there, and then believe, and then on top of that, that’s not the only problem, the problem is, then we let our mind hold on to that, this is one hundred percent true, so no doubt, no question, so live life completely, so we live life completely with that, so, it’s really, it’s unbelievable shocking, if you realize this it’s, we have been cheating ourselves constantly, constantly, from beginningless rebirth, not only from this morning, not only now, not only from this morning, not only from birth, not only from birth, since consciousness took place on the fertilized egg, in the mother’s womb, not only from that time, from beginningless rebirth, so constantly.

So not only problem appeared wrong way, all these phenomena that which our mind labeled constantly, this and that, so then appeared back to our mind, hallucinated mind, not merely labeled by mind.

Just second before, your mind merely imputed, but then, not aware of that, and not aware that at all, and what your mind labeled, merely imputed, and then it appeared back the next second, something totally, so there are many different levels, so when it appeared back, it has as permanent the, how to say, I forgot the Sanskrit name, chedan__[Sanskrit] Bhagawan, I’ve forgotten, I’ve forgotten, anyway, the four schools of Buddhist philosophers, the Cittamatra, see, it has eighteen groups, eighteen schools, [pause] eighteen schools, __[tib/Sanskrit?] so the, there’s _ so however, so they appear in the Hindu religion, the I, self, believe permanent, what’s called, atman, atman, believe permanent, and existing alone, existing alone without dependent parts and existing with its own freedom, without depending on cause and conditions, so like that.

So here, in the Buddhist, Vaibhashika, that’s right, Vaibhashika School, the je dra ma ba, that which has the eighteen schools, however, the first one, so the view of this school, even this very first school, reality, the view of this school, however, it’s empty of permanence, the I is empty of permanence, because it’s under the cause and conditions, so they are existing under the cause and conditions so it changes, decays, constantly, so, it’s in nature of impermanence, so it’s empty of permanent, and then empty of existing, depending on parts so empty, it’s empty of existing alone, and it depends on cause and conditions, it is empty of existing with its own freedom, so that's the reality, so if you analyze, that’s what we discover, if you analyze, this is what you discover, the nature of the I, self, so the same, the rest of the phenomena, causative phenomena.

So in here, how this hallucination, outwardly existing appear, however, then the rang gyü pa, the Madhyamaka School, rang gyü pa, as well as Svatantrika School, de pa__[Tib], the truly existent, is there.

So, that, without depending on, appearing to the valid mind, and that valid mind labeling, without depending on that, and then existing from its own side, that definition of true existence according to the Madhyamaka School, the Svatantrika School, rang gyü pa, the second when the I, self, first second the mind merely imputed, then next second appeared back as that type of true existence is always there, this hallucination is also there, this false I is always there.

So of course, as I mentioned just before, we have this hallucination when the I appears back, I appearing that way, in this form of hallucination.

So what rang gyü pa believes that, exists, labeled by mind but there should be something existing from its own side. So that one, so that is the refuting object, the Prasangika School’s view, object to be refuted.

So therefore the answer is, why you have fear, or why you feel unhappy, why you feel unhappiness, depression, however, so whatever the problems of mind, whatever the problems of body, even this, you press here, you feel pain, here, why you feel pain instead of great bliss, so why there’s pain, why you experience pain, so same. So when you go through the doors or sometimes we bang our head on the door or some, knocked, then pain, this table or something, why you feel pain, also, all that, so same, why there’s attachment arising in the daily life, certain object attachment arises, certain objects anger arising, certain objects, pride, jealous mind, pride, so ignorance, so all this in the daily life with the different objects, why it’s happening, so that, all this wrong concepts, superstitious thought, because it’s not true, because the object, what it projects, what it believes, what it projects is not true, it’s not there, it doesn’t exist. Each delusion has its own view, projected, and that believes, which is not true, doesn’t exist, because it’s all built after, on the basis of projection by the ignorance, projection, false view, projection, object to be refuted, projected by the ignorance, on what is merely imputed by mind.

So it created your own world, hallucination, like that.

So anyway, so what I was saying before was, so people as, in the West, why there’s fear, why do we have fear, it’s one of the questions, why there’s fear, so anyway, same, it is same, any problems, so, not only that question but any, see, why there’s problems, why there’s anxiety or, all that, fear, worry, I mean all the things, all the mental problems, as well as all the physical problems, pain, so as I mentioned, so including this, because we let, didn’t realize the I is empty, as well as the action, object, did not realize it’s empty as they are empty, from beginningless rebirth, so, this hallucination that you create, that you have created, projected by your ignorance, so then it’s something that appears something real, independent or true existent.

So, yeah, if that’s natural, so then everything would be natural, everything has got to be natural. All those people who died, suffered, fear, unbelievable fear, if it were all natural then, then karma doesn’t exist, you see.

How Karma Comes from Ignorance: Part B »
+ View all Teachings on this topic
+ View All Teachings

How the Kopan Courses Began