A Teaching on Vajrayogini

A teaching by Kyabje Lama Zopa Rinpoche prior to a Vajrayogini initiation at ABC Centre, Singapore. The date of this teaching is unknown, but could be 1998. Edited by Ven. Ailsa Cameron. 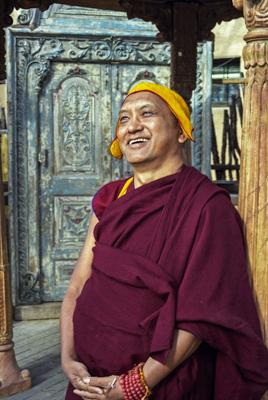 ..I don’t know how many years ago it was that Changkya Rolpai Dorje came and gave teachings all over Taiwan. There’s a very interesting story about how he gave teachings in Taiwan.

There’s a nunnery in Kaohsiung where I went to give teachings many times and where I once led a Medicine Buddha retreat. The abbess who built the temple, who is the teacher of the abbess who is now running it, was the translator for Changkya Rolpai Dorje, but she didn’t know even one Tibetan word! The present abbess told us that she prepared by writing down her own notes on the basic subject, such as refuge or karma, before the discourse. Changkya Rolpai Dorje would talk in Tibetan, and she would then talk from her notes. She did this all over Taiwan. It was her own teaching—nothing to do with Changkya Rolpai Dorje. It was because she didn’t know even one word of the Tibetan language. At the end of the teaching, everybody would say, “That teaching was fantastic!” Everybody praised the teaching, but it was her teaching.

So, this is how Changkya Rolpai Dorje gave teachings all over Taiwan. It seems incredible. Even though the people didn’t understand the meaning (unless there were some special beings who could communicate in that way), at least they received the lung, or oral transmission, of the teaching. It’s very interesting how this abbess planned it. It’s very smart.

If a translator is very good and knows the Dharma well, they can make the lama’s teachings more beautiful, better sounding and more humorous. The translator can add many things that the lama didn’t say, so that the teaching is more alive, more interesting.

I once tried to translate for His Holiness Zong Rinpoche, when our organization had requested Rinpoche to give teachings in our centers in the West. This was the first time Rinpoche came to the West. Since my memory is very bad, while I was listening I would forget things. Of course, I received a few scoldings, or blessings, from Rinpoche. Whenever I made a mistake or missed something out, Rinpoche would then talk again on that point.

These references seem to be very important in the Eastern world, for Tibetans and Chinese. But I think that people in the West don’t ask questions about whether or not a teaching was taught by the Buddha or has references in the teachings of the ancient valid pandits and yogis. For them it doesn’t seem important to check the references. When Western people listen to Dharma, they’re happy if it’s something that is immediately beneficial to their life, to their mind, especially if it’s related to their problems. It doesn’t matter whether it is something that Buddha taught or a demon taught. They don’t question or check. For them it is about getting some immediate benefit to their mind when they listen; they will then stay. Otherwise, after a few minutes they leave, especially during my talks. But generally speaking, in the East, people are more careful to examine whether something was taught by Buddha. They check the references so that they can see whether or not they can trust the practice, whether or not they can dedicate their life to this. They think about the long run, which is very important. In the West, the main concern is to immediately, right now, taste something sweet.

In the teachings of Naro Khachö, the profound meaning is integrated into the essence. Naro Khachö is one of the three red deities that are part of the Thirteen (or Fourteen) Golden Dharmas of the Sakya tradition. By achieving the supreme realization, one can achieve the common siddhis by the way. A fortunate being, without leaving their body, can go to the Vajrayogini pure land. This Naro Khachö teaching is extremely profound.

Those who have much karmic connection with Vajrayogini and who are of highest intelligence, just by doing the short “enabling actions” retreat, with recitation of 400,000 mantras and a fire puja at the end, and by doing tsog offering every month on the 10th and 25th (or at least reciting their commitment of Vajrayogini mantras every day without missing a day) are able to go to the pure land.

Those of middling capability, if no signs happen after having taken the initiation and done the retreat with recitation of 400,000 mantras and the fire puja at the end, then they do the long retreat, the three-year retreat, reciting 100 times 100,000 mantras with the fire puja at the end to fill up the missing mantras. They then do the special practice, “obtaining the langali1 wood.” They do 100,000 self-initiations and collect all the sindura powder2 and put it into the langali wood . After having done all this practice, they then wander around, with the stick filled with sindura and with sindura on their forehead, looking for Vajrayogini. When the sindura transfers to a woman and circles there on her forehead, it’s the sign that that woman is Vajrayogini. They then circumambulate her anti-clockwise, grab her feet, and without any hesitation or doubts, make one-pointed request to her to guide them to the pure land. There is a verse to recite with the circumambulation, “You are my mother…. ”

His Holiness the Dalai Lama said in one teaching, “When there is a gathering of many women, I sometimes visualize circumambulating them anti-clockwise.” This is part of the practice of mother tantra. So, it is normally mentioned to visualize in this way. If you are then able to meet Vajrayogini in ordinary form with the sign and are able to recognize her, you recite this prayer and circumambulate her anti-clockwise without any hesitation. You then grab her feet and make strong requests that she take you to the pure land.

For Vajrayogini practitioners of lowest capability, after they have passed away and are in the intermediate state, the dakas and dakinis from the pure land come down, make a procession, and guide them to the pure land.

There have been many Tibetan lay people who couldn’t read any Dharma text and had never even learned the alphabet, but they received initiation from a lama, and with strong devotion to the deity Vajrayogini, looking at the deity as one with the lama, and every day they would just recite the mantra. Sometimes they would even do retreat with monks. Because these old men and women didn’t have any education, they would just sit there in the line and recite many mantras with much devotion. This is how they did retreat.

I knew one old woman at Buxa who was very devoted. She would recite mantras and circumambulate the monastery when the monks were there doing prayers before they went for debate. One day when she came back from circumambulating the monastery, she sat down on a chair and thanked her son, who was the main person taking care of the family. She passed away just sitting on the chair. She passed away very easily and in great peace. There are many such stories about Vajrayogini practitioners, so there is no doubt about those who actually study the teachings, meditate, and do retreat.

And there is always a good story when someone who has done the three-year retreat passes away. People who have done a three-year Vajrayogini retreat always pass away in the meditation state. A geshe in Sera Monastery went to see his teacher, Geshe Urgyen Tseten, who in the past came here and gave teachings one or two times. We were extremely fortunate to be able to receive and make a Dharma connection with Geshe Urgyen Tseten, who is not only a great scholar but a great practitioner. So, this geshe went to Geshe Urgyen Tseten and said, “I want to do a long retreat.” Geshe Urgyen Tseten then asked him, “What are the three principles of the path?” The geshe couldn’t answer. [Part of teaching missing at this point.]

However, when he later passed away, he was in the meditation state for a few days, which means he had gone to the pure land of Vajrayogini in the intermediate state. He was guided to the pure land by Vajrayogini in the intermediate state. Even though he didn’t have much intellectual knowledge and couldn’t even explain what the three principles of the path are, because of his good heart and his incredible devotion to his guru and deity, just reciting many mantras enabled him to make his journey to the pure land, and there he was then able to achieve enlightenment. There have been many stories like this.

So, we have to do the gegtor, giving torma to the interferers. Before that, we’ll maybe have a pipi break—before the initiation, before going to bed!

1  Langali (Gloriosa superba): A plant found in India and Asia. [Return to text]