Lama Yeshe - On The Six Yogas of Naropa

This is an excerpt from extensive teachings on Lama Tsongkhapa's commentary on the Six Yogas of Naropa. The teachings were given by Lama Yeshe at Vajrapani Institute in California from May 30 to June 11, 1983. You can watch Lama Yeshe giving this teaching on our YouTube channel.

In this excerpt, Lama introduces the Six Yogas of Naropa, a completion stage practice of Highest Yoga Tantra, originally transmitted from the great mahasiddha Naropa to his disciple, Marpa. Lama discusses Naropa's spiritual journey and advises students to have a nonsectarian approach to these profound teachings.

Lama's teachings on the Six Yogas of Naropa were published by Wisdom Publications in The Bliss of Inner Fire, which combines two commentaries Lama gave on this practice, this one at Vajrapani in 1983 and another at Istituto Lama Tzong Khapa in 1982-83. 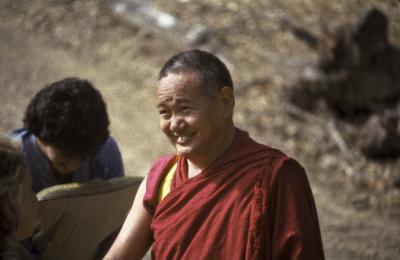 We supposedly start today, our job we start today, from the beginning. Better slow down. [Laughter] Now, supposedly I have to teach you this time. It's called Six Yogas of Naropa. Anyway, I'm not sure myself, so therefore always delayed.

Also myself, I received this teaching from my guru almost two or three times. And even though I'm not a successful meditator, I try, at least I try, OK? Therefore, you know I mean well, isn't it? At least. [Laughter] That's all I can say.

But then he was a famous distinguished one in the monastery. Maybe many people gave attention to him. But in his mind, he was not so happy. He didn't think he was a great man. Even though he was like a computer; he could tell everything, he could debate, he could remove all sharp criticism. However, somehow he was dissatisfied.

One day, I guess, he told his dissatisfaction to some of his guru. Then his guru gave him the mantra we are doing, OM HRIH HA HA HUM HUM PHAT and he did that one, this mantra, quite a bit. Then after sometime, while he was doing the mantra, suddenly from space making a sound, told him "You are still a baby, long way to go. Your knowledge is just intellectual it is not enough. In order to fulfill total satisfaction, there is some guru such and such place called Tilopa." Something like that.

So he thought maybe that was something special for him to research. So he left the monastery and met Tilopa. Tilopa looked like an immoral man, sitting somewhere eating fishes. Something like that. Anyway, he didn't look like a great yogi, maybe if you saw Tilopa, you'd think, "Who'd want to listen to this man? He is impure, immoral." You would see him that way. However, Naropa saw Tilopa.

Also you know the history of how Naropa went through twelve years of trouble. Each time he had to do outrageous action for his guru with so much struggle, not receiving really what he wished, not receiving mahasiddhi, realization, or initiation, empowerment. Not receiving anything for so long. So it went on and on and on.

So this is really, I feel is a very good example. Naropa was such highly advanced in intellectual, philosophical, ritual, in both tantra and sutra, and still he's a baby and not discovering satisfaction within himself. So he had to seek a tantra master and struggle all these things. This is a good example for us.

[Lama recites from the root text in Tibetan]

This commentary has three characteristics. Description of meditation clean-clear is number one, maybe. And second is very distinct, distinct explanation rather than like my mind all mixed up. You know I say something and then suddenly I want a flower, you know? I get distracted, I talk about this, I am over here. The commentary says not mixed up, is scientific clean-clear.

This is you just listening. It's not important, if you pay attention or not pay attention, I don't mind. Just myself enjoy, you know. [Laughter]

My enjoyment is finished now. [Laughter]

Now, this is important I think, even though you have studied so many subjects, you have received hundreds of meditations, technical meditation and still you are lost, that shows something's wrong, isn't it? Something's wrong.

Something in the beauty of Tibetan Buddhism. We have clean-clear structure from beginning up to end. We already have [Lama whistles] clean-clear. We have a clean-clear list we can show you how you can check up. That is, from my point of view, to be appreciated, is very much to appreciate.

We are concerned very much how the mind is the nucleus of samsara or nirvana, whatever it is. So all the trip what we are having in our life is all manifested from the mind. Remember. So we should have to some extent, since we are getting Buddhist education, we should have some kind of awareness of our needs, at least you should know what you lack and what you need. To some extent, you should know. I believe if you try to know, you will know.

It is similar, absolutely. Similar, that you feel some lack of satisfaction. Of course it can be gross, it can be subtle. But you know the Buddhist way to solve the problem is not try to solve the subtle one but to try to solve the gross one. Remember those things that Maitreya explained. So in order to solve the gross problems, what you really need if you want is to know it, you can really know. So then you can act and eat and take your level of meditation.

The common Mahayana preliminary is the lam-rim, you remember? Explaining from taking refuge, actualizing bodhicitta, knowing your value of life, four noble truths and loving kindness and six paramitas, I know you remember those things. All those things are Mahayana common preliminary meditations.

Not doing exactly business. Just produce superstition. But the business is, what is it? Kagyüpa business, Gelugpa business, Christian business, all these peoples' business is to do good things, serving for others, develop yourself, isn't it? So this business is given up. Then just talk about, “Maybe he is, maybe she is.” Also waste of time, waste of time.

So therefore, to know this is important for you, OK? So yourself also not involving in a ridiculous waste of your time. We are concerned so much with time, money and life. Now we do something meaningful, get something yourself. That is more worthwhile than just to poison each other with negative energy. This not so worthwhile. I'm not making anything special because what Lama Je Tsongkhapa is telling here is so important, significant to all of us.

Anyway I'm not worried about how you people are, really. Most of you I know, I trust you, that you are not involving in any this kind of sectarian negative poisoning conversation and these things. You are not involved. I'm very happy. And I try also to accord with Lama Je Tsongkhapa's explanation; I try to make clean-clear your view and practice.