A Simple Explanation of Karma

Lama Yeshe discusses karma in this teaching given at Manjushri Institute, Cumbria, England, in September 1976. Edited by Nicholas Ribush. 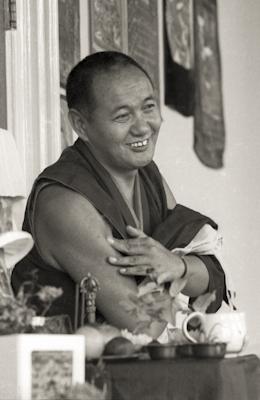 You can explain karma in many different ways. For example, it can be explained academically, with many divisions and analytical points of view. But right now I am going to give just a simple explanation.

Taking refuge cannot solve your problems if you are not aware of your own actions. Even though you believe “Buddha is fantastic; Dharma is fantastically pure; Sangha is fantastic. They are perfect; I have no doubts,” that is not enough. It is not enough to say, “OK, I understand from meditation, books and lamas that Buddhadharma is perfectly clean clear. I know now that this is my path.” If you live that way rather than being aware of your own actions, refuge cannot solve your problems. Real refuge is saying and doing things according to the motivation of refuge in your mind, and that is karma.

Karma means that you act in a certain way with a certain motivation and some effect arises within you. Karma can be positive or negative. Actions that bring a positive reaction are called morality; actions that bring a negative reaction are called immorality. Whatever action—or we can call it energy—of body, speech or mind that brings confusion, restlessness, sorrow or suffering is immoral. So, as much as possible, we should try to understand Lord Buddha’s teachings, which say that certain actions are moral and certain actions are immoral because they bring good or bad reactions respectively.

Understanding this, in your everyday life you should try to make your actions as positive as you can. Try to understand, “If I think this way and act this way, what kind of result will it bring?” Knowing this is very important. Also, karma is not something that you just believe. Your entire energy since you were born has been related to karma. The existence of karma is not dependent on whether you believe it or not.

For example, maybe you say, “I don’t believe in karma. I don’t believe in anything. There is no such thing as karma making me happy or unhappy.” No matter how much you are against it, your entire being, your saying this and thinking that—it is all karma. No matter how much a person may be against Lord Buddha’s idea ... it doesn’t matter. The entire person, both psychologically and physically, who is tick, tick, ticking like a watch— all that is karma. Therefore, karma is just the energy of your body, speech and mind. The human body, speech and mind are karma.

The meaning of karma includes cause and effect. Your entire physical and mental energy, everything is reacting and producing other actions, no matter whether you believe it or not. Some Western people think, “Well, if I am Buddhist and I believe Lord Buddha’s idea, then I have to be careful; if I am not careful I will get bad karma. But if I do not believe, it doesn’t matter.”

Also, there is some confusion around Eastern words. The word “karma” is Sanskrit. When one says “karma,” you say, “Oh, karma is Eastern stuff.” You cannot say that. All of you is karma. You are karma; you cannot escape from karma. It does not matter if you follow another religion, if you are a Hindu, if you are a Christian, if you are a believer or a non-believer, you are completely immersed in karma.

Now, you can see through your own meditation experience how the mind is continually circling around—whooooshhhhhh. You cannot stop your mind from running around—one thought, then another thought, and another thought, and another ... phew! Incredible! This is karma, the uncontrolled thoughts running, running like a watch. Without understanding the activity of our body, speech and mind we will not understand how to generate a positive or a negative lifestyle. Even though we have tremendous belief that “Buddhadharma is my way,” we are still joking.

The simple way to live positively is to examine the everyday actions of your own body, speech and mind. As much as possible be aware; what we call morality is putting the energy of body, speech and mind in a positive direction. But in the West, morality and immorality have religious connotations. There are some funny ideas, such as the belief that morality is something made up by religious people. No! Morality is not merely a religious idea; it is not some philosophical creation. Morality is about nature.

Scientists explain natural things—organic, inorganic, the evolution of human beings, fish and monkeys. This is all taught at school and you learn these things. From Lord Buddha’s point of view, karma is closer to the things you learn at school. In school they try to teach you as scientifically as possible: “This is exactly like this, then this comes, then this, then that,” and so on, the mathematical way. Karma is similar.

Actually, if you are aware of how your own body, speech and mind are running, the evolution of your everyday life is similar to what you learned at school. When you understand karma you will see how greatly effective just one small action can be. For example, when Lord Buddha once explained karma, he used a bodhi tree seed as an example. Do you know the Bodhi Tree in Bodhgaya? It is huge, isn’t it? He took a seed of the Bodhi Tree and said that by putting that tiny seed into the ground, the result would be a huge tree that can give shelter to five hundred bullock carts. That was Lord Buddha’s example: a small seed can produce a huge plant. It is the same thing with karma. Especially the psychological effect, which is much greater than the external one.

In the West, some people think that karma is something simple, whereas meditation is a profound and unusual contemplation where you become very high and feel, “I’m happy ...” They think that is fantastic. Actually, according to the lamrim, meditation is not the most important thing. What is extremely important is to maintain awareness of your everyday life actions. Be aware of your own actions and put your actions on the right track. Then you will begin to experience an incredible effect.

karma, cause and effect, morality

A Perfect Object of Refuge