The Road to Kopan

Dr. Nick Ribush was practicing medicine in Australia when, for various reasons, he got a bit disillusioned with it and, in May 1972, set off to travel the world. By the end of the year he was living at Kopan, beginning what is, at this point, an almost five-decade career in the FPMT. “If at the time someone had told me what would happen to my life if I did that course,” he says, “I probably would not have done it!” Since then, he has, on behalf of Lama Yeshe and Lama Zopa Rinpoche, founded and directed Wisdom Publications, Tushita Mahayana Meditation Centre, Kurukulla Center and the Lama Yeshe Wisdom Archive, which he has run for the past twenty-five years. He told Mandala what led him to the Dharma. 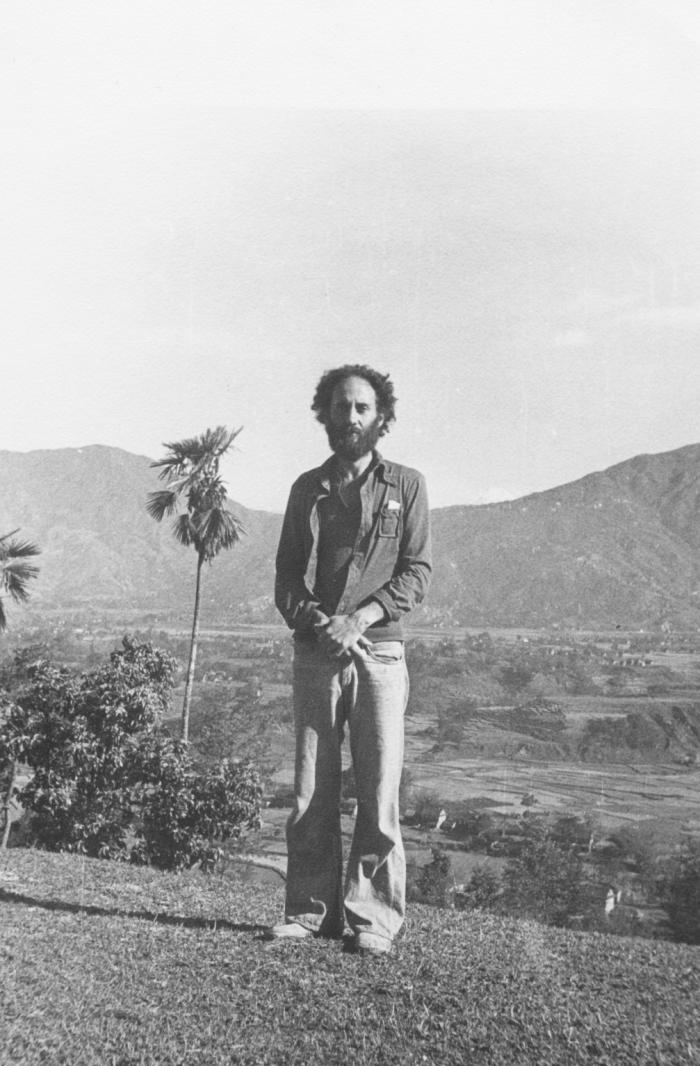 I was lying on my bed on the farm at Maleny, Queensland, when I noticed a lump in my left iliac fossa. It was a George Costanza moment: “Oh my god. My life is perfect and now I’m being punished with cancer.” That’s the type of hypochondriac I was. I rushed back to Brisbane to see a surgeon friend with whom I had worked at Princess Alexandra Hospital. “That’s feces in your colon,” he diagnosed.

This was to be the first of several impending death freak-outs I would have over the next few months. As I look back on this time I can’t help but think it was the blessings of Lama Yeshe keeping me off balance and beginning to reel me in.

How was my life perfect? I had a beautiful girlfriend, a beautiful career, a beautiful farm and a beautiful plan. The plan was to put the career on hold and travel with the girlfriend, Marie (now Ven. Yeshe Khadro), around the world for four years, come back to the farm and pick up where we had left off. The plan had largely come about because in the quiet moments I would often become aware of a deep-seated gnawing feeling that despite the beautiful life, something was missing. I really couldn’t put my finger on what it was, but the conclusion I finally arrived at was that I hadn’t seen the world. That must be it. The answer was travel, serious travel.

Hence the plan: Brisbane to Bali, chill there for a while, then Jakarta, Singapore, Bangkok and so on, hopping by plane through the various Pacific Rim capitals, across the Pacific to Vancouver, train to visit friends in Toronto, overland south through all the Americas to the bottom of Argentina, boat to Cape Town, overland north through all of Africa to London, stay there for a bit, then back to Australia overland through Europe, the Middle East and all of Asia. Four years. Then I’d be happy. 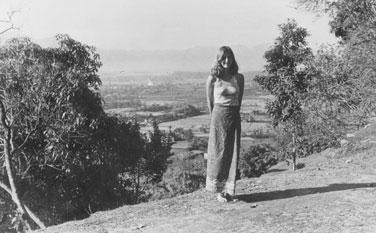 We started off by staying in Bali for a couple of months. We rented a cheap room in an old Dutch plantation bungalow and spent every day at the beach lying in the sun, bodysurfing, eating coconut for lunch, watching the sunset, having vegetarian buffet for dinner and enjoying the local entertainment at night. We smoked dope most of the time and communed with an endless stream of American and European hippies on their way to Australia to earn enough money to either go back to India or get back home. Listening to these freaks’ stories of their adventures in Afghanistan, India and Nepal made it seem much more interesting to stay in the East than to go back to the West so we decided to scrap the beautiful plan, cash in our tickets and hit the hippie trail to Europe. 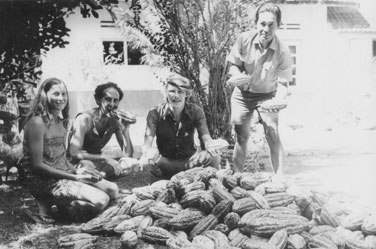 Eventually even paradise got boring, as it does, and we moved on, to Java. Our first stop was a coffee plantation near Surabaya owned by an Indonesian guy we’d met in Bali, one of the many locals we’d meet on the road who liked to befriend Westerners simply because they were Westerners. Since staying with him would be free, we accepted his invitation. Just after we got there I noticed a mole near my left little toe was bleeding. “Oh my god, it’s the classic sign of a melanoma. I’m going to die.” I got totally depressed, ruined the stay for everybody, and hastened to our next destination, Yogyakarta, where I went to the hospital and had my melanoma biopsied. It was nothing; my sandal strap had been rubbing on a simple mole. That was it. But this reminder of my mortality did serve to keep me from believing that what I was doing was pure happiness. 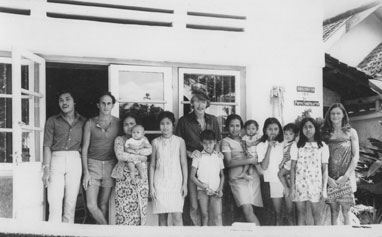 Before we left Yogyakarta we visited the as-yet-unrestored Borobudur, my first stupa. We climbed to the top and smoked a joint. Then, on to Jakarta and Sumatra, where we spent a week in a village on the island in Lake Toba. Ferry from Medan to Penang; a few days on Chulia Street. Then we hitched north through the rest of Malaysia and Thailand to Bangkok.

By the time we’d reached Bangkok I was experiencing some numbness and tingling in my hands. “Oh my god, I’m getting MS. I’m going to die.” I got in touch with a Thai doctor with whom I’d worked at the Royal Melbourne Hospital and had nerve conduction studies done. Diagnosis: my heavy backpack was pulling on the nerves in my neck. Lighten up. But don’t get too comfortable.

In Thailand I saw monks, stupas, temples and Buddha statues everywhere and thought that, as a good tourist, I should understand the culture of this country through which I was traveling. But our budget was $1 a day for travel, food and accommodation and there was nothing left over for books. Therefore, in a well-planned shoplifting heist, I stole my first Dharma book, Buddhism, by Christmas Humphreys, from a Bangkok bookstore. 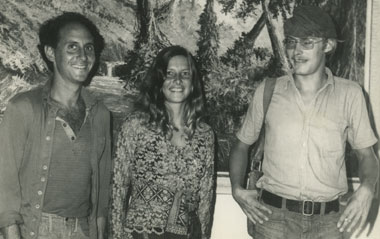 The other life-changing Bangkok event was running into a Danish friend from Bali, Lars. We’d hung out with him there and he’d traveled with us to the coffee plantation, but then we’d split up. Lars was out of money and asked for my help in getting back to Copenhagen. His plan was to fill a false-bottom suitcase with, auspiciously enough, Buddha grass (the famous powerful Thai stick, which always fetched a pretty price back in the West), sell it back home, and return to Kathmandu in a couple of months, where he’d pay me back with interest. Sounded like a deal; I bought him his ticket. And Nepal became our ultimate destination.

We hitched northeast from Bangkok to the Mekong and took the ferry across to Vientiane, Laos. We found a cheap hippie hovel to stay in and then I went to the market and bought a sheaf of dope for about 10 cents. I took it back to our room, lit up and opened my stolen Buddhist book. Now, I wouldn’t recommend this book to anybody today, but as I read, a strange thing happened. As I came across the concepts of karma, rebirth, emptiness and other fundamental teachings, I felt my heart stir and the thought “This sounds true” arose. True, not in the sense that an anatomy textbook is true, but true in a much deeper sense. It was weird. I hadn’t ever felt like that before. 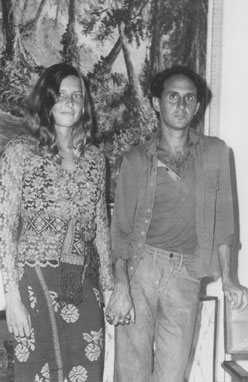 However, I didn’t immediately rush off to find a guru or anything. I just made a mental note to find out more. The book also said that meditation is an essential part of Buddhism. I didn’t know what that was either but again resolved to check into it later.

So, we traveled on. To Luang Prabang, Ban Houay Xai, Chiang Rai, Chiang Mai (where again I got sick and thought I was dying from leukemia) and back to Bangkok. We then spent an amazing week in Burma: Rangoon, Mandalay, Pagan, Pegu, back to Rangoon. Stupas, temples, statues, texts. Then to Calcutta, where we went to the Mahabodhi Society and got some more books on Buddhism. After a week there, it was time to head north for our rendezvous with Lars.

We took the train to Raxaul and crossed the border into Nepal, where we stayed a night in Birganj and then took the morning bus to Kathmandu. All along the way I was reading these books and trying to tell Marie all about Buddhism. She wasn’t interested. As a recovering Catholic, she wasn’t in a hurry to get into another religion. As I raved on she looked out the window at the scenery.

We got off the bus and saw José, a Brazilian guy we’d also known in Bali and Bangkok. He greeted us like long-lost friends and took us to his hotel, just off New Road. I asked him if he’d seen Lars. He hadn’t. He showed us around town: where to eat, where to listen to music, where to get the best pie, where to buy the best curd, and, of course, where to buy dope (Freak Street). Almost as an aside, he mentioned, “And if you’re interested in meditation, there’s a meditation course starting next week at this monastery near Boudhanath.” Meditation? That’s what I’d decided to check out later. Perhaps the time had come. Anyway, since Lars wasn’t around, I’d have to wait for him. 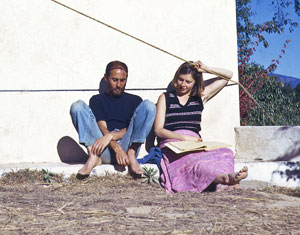 The monastery, of course, was Kopan. We wended our way there through the beautiful rice fields of the sparsely populated valley, nothing like it is now, and climbed the hill. Nobody seemed to be around but there were a couple of notices on a bulletin board. One was for a ten-day Goenka vipassana course; the other was for the Third Kopan Course, starting 28 October 1972. Marie enthusiastically suggested we do the short one, but since the Kopan course was only 300 rupees for the month, much cheaper than staying in Kathmandu, I insisted we do that.

We did, and the rest is history.

Working for the Dharma > Advice to Dharma Centers