The Remedy to Depression Is a Good Heart and Purification (Video)

In this video extract, Lama Zopa Rinpoche explains that depression and anxiety can be overcome by practicing the good heart and cherishing others instead of oneself. Practices to purify negative karma and collect merit are also powerful remedies, instead of just feeling sad. This teaching was given at Kurukulla Center, Medford, USA, on August 18, 2018. 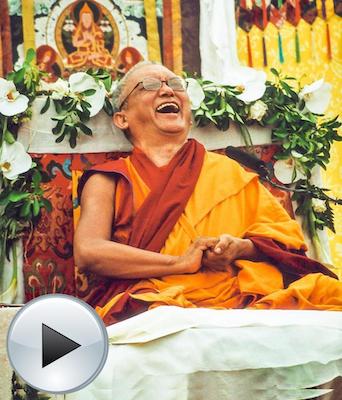 Rinpoche had asked a student who is a psychologist about the most common problems of his clients. He replied that it is mostly depression and anxiety. Rinpoche explains that these problems are caused by our strong desire and attachment to this life. He jokingly says that the same way that Tibetans recite OM MANI PADME HUM, people in the West recite “When can I be happy?” This is completely self-centred and thus non-virtuous. Clearly the way to overcome these states is to develop a good heart and focus on helping others. If depression comes specifically at certain times of the day, it might be related to past sexual misconduct, in which case purification is the best remedy.

I think many of the old mothers, Tibetan, they recite OM MANI PADME HUM for all sentient beings. I hear their prayers, I listen to their prayers, for all mother sentient beings to be free from samsara and to achieve enlightenment. They pray, all those old mothers who don't get to study deep Dharma, who don’t get to study like many of you who got to study texts, Tibetan, Dharma, not like that. Even they can’t read Tibetan letters, but they recite OM MANI PADME HUM for all the sentient beings, can you imagine? Ha ha. Can you imagine?

OM MANI PADME HUM, one word, not one word, sorry, six syllables, thinking of all these sentient beings. Can you imagine? Bah, bah, bah. Numberless hell beings, numberless hungry ghosts, numberless animals; numberless animals means that ordinary people can’t see, underneath the earth, inside the mountain, tiniest insects that ordinary people cannot see. When you walk in the grass those so tiny flies jumping away, so much flying in the sky when you see through the sunbeam in so many places, but when there is no sunshine you don't see, no sunlight. Unbelievable, unbelievable. So different insects like that, the ants, the different universes, there are numberless universes scientifically mentioned as well as in Buddhism. Then numberless human beings in different universes, numberless universes, suras and asuras. So recite OM MANI PADME HUM thinking all sentient beings to be free from suffering and achieve enlightenment. The benefit what sentient beings receive, numberless sentient beings in each realm receive that benefit, when the old mothers recite the prayer like that. Oh, like that, unbelievable, unbelievable.

So what I am saying, if you practice a good heart, patience, contentment, as His Holiness says, these positive things, all these things, what makes a good human being in the world, that you bring peace, happiness in the world, for your family, your country, the whole world, besides yourself. I think if you practice these things, good heart, all that, then the depression is much less. Depression, anxiety, less, much less, so much less, depending on how much you practice.

Then of course what you do, not only being upset, not only you stay upset, no, then what you do is you purify. The remedy, what you should do is purify past negative karma then you try to abstain from that as much as you can, not just being sad, “Oh, I’m this,”—not that. Sorry, I’m talking like a child, sorry. Not that. You purify past negative karma, you do the practice of purification as much as possible.

So many purification, Vajrasattva, practice of Thirty-Five Buddhas, is very powerful. By practicing one time Thirty-Five Buddhas practice it purifies very heavy negative karma of having killed father or mother, killed arhat, caused blood to a buddha, disunity among the Sangha—the very, very heavy karma without break. Even other negative karmas without break, lighter ones, they have to wait a long time, then the very heavy negative karma, the heaviest negative karma, all this, to get reborn in the number eight hell realm, number eight Nyalwa Ngarme, Inexhaustible Hell Realm. Then for eons, even this world ends but your karma is not finished to be in that hell realm, number eight, then you get reborn in another universe and you experience the number eight hell realm there until your karma finishes. By reciting Thirty-Five Buddhas, doing the confession just one time, reciting it one time, doing it well, not just like playing a tape recorder, not like that, no thoughts, by reciting well, then those five heavy negative karmas without break totally get purified.

I wrote to Kyabje Denma Locho Rinpoche in Dharamsala, “Why Lama Tsongkhapa did not say Vajrasattva many, many numbers but why he did so much Thirty-Five Buddhas with prostrations?” Rinpoche answered, Rinpoche said “Your question is like a kagya, like somebody gave an order,” it was like that Rinpoche said. But Rinpoche said if you recite this one time well, then it purifies five very heavy negative karmas, they get purified even by reciting it one time, that is why Lama Tsongkhapa did many hundred thousand prostrations. I thought it was seven hundred thousand, but it was much more, so much more, together with Thirty-Five Buddhas recitation.

Numberless buddhas, then one guru—the most powerful purification and collect the most extensive merits you collect by serving one guru than numberless buddhas. Therefore, by pleasing the guru it is the most powerful purification. So, then you try to abstain from those negative karmas, so this is the way to do, not just staying upset. You try to overcome, that is the way to do it, not just thinking only suffering and then leave it there, you don't think to be free from suffering—you don’t think that, not like that, that doesn’t help. So like that, anxiety, all the depression, all that.

Of course it is karma, everything is karma, came from karma, past karma, yes, whether it has reason or no reason, it just comes, whatever, like that.