Kyabje Lama Zopa Rinpoche explained reincarnation at the 20th Kopan Course in December 1987. This teaching is an edited excerpt from Lecture Fifteen of the course. Click here to read more. 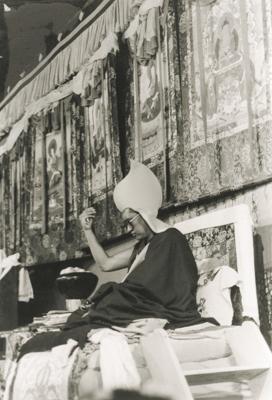 Even if we don’t understand all the teachings, there are many teachings that we see are true. Sometimes we have not had enough discussion to clarify the points, or we have not analyzed the points well—we have not spent enough time analyzing the points in our mind. Sometimes when things are not clear, it is because we have not studied or received a clear explanation.

For some people, understanding reincarnation doesn’t depend only on receiving a clear, logical explanation A few people hold a very fixed wrong view and they believe there is one life and no reincarnation or past life’s karma. This is experiencing a result similar to the cause, according to the different results of karma.

There are three negative, non-virtuous actions of the mind—ill will, heresy, and covetousness. Although karma and reincarnation are many people’s experience, it is very difficult to break the fixed idea or view that there is one life and no reincarnation, although in reality, one life is no-one’s experience. We don’t know why we took this one birth—it’s very surprising. Whether we say there’s a creator or not, we don’t know whether this one birth has a cause or not.

Many people can remember past lives and see future lives—even those who haven’t met Buddhism. There are many children in the East and the West, and also many people who remember past and future lives as they develop the capacity of their mind through meditation. There are so many—non-Buddhist, Buddhist, Hindu and so forth. There are also people who are born with the capacity to read other people’s minds and see their thoughts, but this capacity of mind is not common.

Therefore, if reincarnation is not existent, this is something that can be realized and discovered. There is no book that says somebody has realized that there’s no reincarnation, that there’s only one life. Of course, it depends on the philosophy of the society in which we live and the ideas we have studied. This idea of one life and no reincarnation has not been analyzed or checked well with experience and logic—with reality and logic in the world.

Therefore, we need checking and analysis. The second chapter of the Pramanavarttika scripture, a text with eight chapters translated from Sanskrit, is mainly about the proof of reincarnation. There was no Christianity mentioned in the teachings, but there was so much debate about Hindu views. The Buddhist pandits debated with the Hindus and explained how their views were wrong.

This is something that we can analyze so much, and the more we analyze it, the deeper and clearer our understanding of reincarnation and karma becomes. It is like science—the more scientists check the atoms, the more subtle their understanding becomes, and the more they relate it to the mind, rather than relating to the object. I heard that expert scientists, by checking atoms so much, finally discovered that how we see atoms is much more to do with the perceiver’s mind. That’s very, very true—that is exactly Buddhism.

Also, besides just believing the philosophy, scientists need to do analysis. We have met only one culture—we haven’t met all the cultures in the world—and our own beliefs and philosophy depend on what culture we have met. This doesn’t mean that all the other cultures are right or wrong. We have studied only Western culture, and we have not studied or analyzed Eastern culture extensively. We believe whatever we learn early in life, except for a few people who due to their strong karma feel reincarnation by themselves, without needing any Buddhist teachings. They feel it from their own side. Some people who have very, very strong karma, who meditated and practiced recently in past lives or the life before this, have a very strong impression in their mind. Without depending on what has been taught by their society or the culture around them, these people feel reincarnation naturally.

It’s not so much to do with clear explanation and logic. Even if there is a very strong, clear explanation and logic, it is very hard to break, very hard to feel, although what we believe is not according to our own evolution or experience. Although it’s contradictory, it is difficult to see that it is wrong. This is the result of our past life’s karma. There are three non-virtuous actions of mind, and there is the past life’s wrong view that there is no reincarnation and no karma. We need purification for this. It’s important to feel that this is reality, to be able to relate it to ourselves, but even with clear, logical explanation, for some people it’s not enough. What we need is purification practice, so our mind becomes more and more clear, then we can relate, we can feel. Our mind doesn’t feel emptiness at all—emptiness is like a rock and it’s very hard to feel the “I” is empty.

It seems impossible to renounce ourselves and cherish others, because so far we have only cherished ourselves. So, how is it possible to change this attitude and only cherish others? With our present state of mind it seems impossible, but through intensive, strong purification, mind training and accumulating merit, it becomes possible. We must practice the six paramitas such as charity, morality and so forth, taking sentient beings as the object, and we must also practice patience, loving kindness and compassion. By doing the practices with the holy objects—the offerings, prostrations and so forth, all these various practices—by accumulating extensive merit and training our mind in the actual path, bodhicitta—then gradually, more merit accumulates, more purification is done, and after some months or some years, we cherish others more. We were unbelievably selfish before, thinking only of ourselves, but if we continue with these practices, after a while we will be completely renounced and will only cherish others.

It’s the same thing with the realization of emptiness. The mind can be changed, because it is a causative phenomena, dependent on cause and conditions. If our mind is independent, it does not depend on cause and conditions and we cannot change it. There is no way to change it—whatever it is like now, it is going to be like this forever. If our mind is independent, then our mental state will never change. If we are angry at this moment, then we are going to be angry forever, or if we have attachment now, we are going to have attachment forever. However, even without meditating, our mind changes—anger arises and stops, then attachment arises, or indifference. So, even without meditating the mind changes all the time, because it is a causative phenomenon.

So therefore, by accumulating merit and by doing purification practices and training the mind in the path, with these causes and conditions, the mind can definitely change.

The Good Heart
Mind Training in Bodhicitta
Kopan Course No. 20 (1987)