Prayer for Peace by the Great Yogi Tang Tong Gyalpo translated by Lama Zopa Rinpoche at the time of the terrorist attack in New York and Washington. 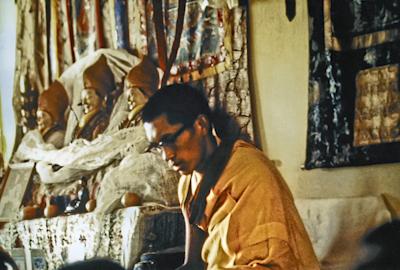 When the sentient beings of the time of quarrelling and five degenerations
By the explosion of the great ocean of evil karma and jealousy
Are tormented by the intensive suffering of fighting and quarrelling
Please dry this up by the power of transcendental wisdom and compassion.

By letting great rainfalls of the nectar of loving kindness fall
On the migratory beings who are enflaming the conflagration of hatred-fire
Please grant blessing with the recognition of each other like father-mother
Then increase happiness and auspiciousness.

May the multitudes of the vicious evil spirits
Who enter the mental continuum and
Change it instantly to the mind of asura
From now on never run in this area (country/world).

I am requesting for even all the sentient beings who have died in the war
To abandon from that time onwards all the evil karma, cause and effect,
Then having entered and been born in the Blissful Field (Amitabha's Pure Land)
To lead all others to that Pure Land.

Please bless all those who are born and die (samsaric beings)
To have a long life, no sicknesses, to pacify all quarrelling and fighting,
Enjoy the ten virtues, have rainfall at the right times, always have good harvests
And for all the habitat and inhabitants to be auspicious and increase.

By the ultimate reality which is pure by nature,
By phenomena having ultimate reality cause and result are unbetrayable,
And by the compassion of the Guru, Mind-seal Deity and Rare Sublime Ones,
May these pure extensive prayers be completed.

When there was unceasing war in Kham (Me Nyak), Tibet and nobody was able to create harmony, the Great Lord Yogi (Tang Tong Gyalpo) came to Kham, generated bodhicitta and just by merely saying these true words and sprinkling flowers all the vicious minds (jealousy and anger) were completely pacified and the war that had been continuous, ceased. There were prosperous harvests and so forth. The country became auspicious and peaceful. This is blessed vajra speech.

This is one of the prayers of the Great Tantric Yogi Tang Tong Gyalpo. The other prayers that he composed were to stop famine and epidemics.

His Holiness Chobgye Trichen Rinpoche who is a Guru of His Holiness the Dalai Lama (His Holiness received the Sakya Lam Dre teachings and initiations including Dorje Phurba from him) and also one of the main teachers of His Holiness Sakya Trizin was invited to one part of Nepal by the Nepalese government. Rinpoche checked what could be most beneficial for them and what prayer was most needed to benefit them. It came out that the best practice for them to do was these three prayers composed by Tang Tong Gyalpo. So then Rinpoche decided to give the oral transmission of these three prayers. That is how I found out about these prayers and I received the oral transmission from His Holiness Chobgye Trichen Rinpoche.

Through whatever merits have come from making this translation available, may wherever this text is (whichever country) and also by reading this prayer, cause all the people's hearts be filled with loving kindness, bodhicitta and the thought to only benefit and not harm. May the sun of peace and happiness arise and may any wars that are happening stop immediately. May there be harmony, peace and may there never be war or violence again.

Translated by the incomparably kind Guru Lama Zopa Rinpoche at Kachoe Dechen Ling, Aptos, California, USA, 11 September 2001, on the day that the World Trade Center in New York and the Pentagon in Washington were attacked and many people killed and injured. This is a revised and edited version of the original, with the help of Ven Sarah Tenzin Yiwong.