In this teaching, Lama Zopa Rinpoche explains the benefits of practicing in Bodhgaya, where the Buddha attained enlightenment. Rinpoche also advises specific practices to be done while on pilgrimage and gives a detailed explanation of how to dedicate the merit.

Excerpted from a teaching given to a Russian group at Root Institute, Bodhgaya, India, on January 26, 2002. Edited by Trisha Donnelly and Sandra Smith. 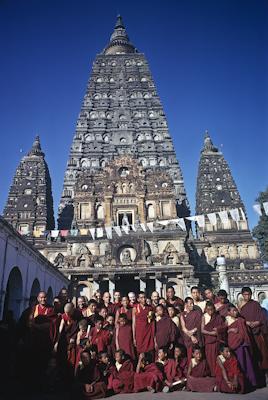 I think you are very fortunate to be able to make time to come to Bodhgaya, where one thousand buddhas will descend, place their holy feet, display holy deeds and achieve enlightenment. Guru Shakyamuni Buddha is the fourth of the thousand buddhas. The rest of the buddhas will also descend here and show the twelve deeds, including the holy deed of achieving enlightenment.

This place is called the Vajra Seat and the ground here is blessed. Before becoming enlightened, the Buddha blessed the ground so it would not be destroyed or cracked, but would remain firm. It is said that there will be no earthquakes in Bodhgaya, where Buddha showed the holy deed of enlightenment, and also, this will be the last place to exist when the world ends.

On top of that, you are receiving blessings from this holy place where the four buddhas already descended and where so many other enlightened beings, yogis and great bodhisattvas came for pilgrimage, to make many prayers and to bless this place. They came here throughout all those past years, for hundreds and thousands of years.

Therefore, it is very good while you’re here to do as many circumambulations and prayers as you can inside the temple in front of the Buddha and especially under the bodhi tree. Even though it is said that the bodhi tree was cut down three times it has the same roots as at the time of the Buddha, when he showed the holy deed and achieved enlightenment.

The great bodhisattva and pandit, Khunu Lama Tenzin Gyaltsen from Kinnaur, India—who gave extensive commentary on the Bodhicaryavatara to His Holiness Dalai Lama, but already passed away and reincarnated quite a few years ago—said that when he was circumambulating the stupa one day, something was seeping out of the tree. It was not the rainy season, it was dry, but something was leaking from the tree. He took one drop and put it on his tongue and it was sweet. Of course, he was a great pandit, a yogi, and in reality, it was nectar dripping from the tree while he was circumambulating. It was actually nectar and when he tasted one drop, it was very sweet.

In the story you know that inside the stupa the paintings spoke to Lama Atisha. One of them asked the question, “What’s the quickest and best way to achieve enlightenment?” One female aspect answered, “The best and quickest way to achieve enlightenment is bodhicitta.” Khunu Lama Tenzin Gyaltsen said all the outside statues spoke to Lama Atisha, not only the Tara statue.

Of course, holy objects such as statues can speak to those who have pure karma and a pure mind, like Lama Atisha. As mentioned in the lamrim teachings by Pabongka Dechen Nyingpo and also in other teachings, the bodhisattva who has achieved the preparatory path, the path of merit, which has three levels—small, middle and great—those bodhisattvas who have achieved the great path of merit see buddhas in the nirmanakaya aspect. They see the statues in nirmanakaya aspect, so the statues speak to them.

The higher bodhisattvas who have actualized wisdom directly perceiving emptiness, who have achieved the right-seeing path, those arya bodhisattvas see the statues in sambhogakaya aspect. Of course, when they become enlightened, they see other buddhas as being oneness. When they become enlightened, they become oneness with all the buddhas, like water coming from the rivers, from many different sources, from different snow mountains, which goes into the ocean and becomes one. Even a drop that goes in the ocean becomes one. All the rivers, the different waters coming from different parts of the world, go into the ocean and become one, like that.

It’s also very good to recite any of the lamrim prayers, either based on Guru Puja or Lama Tsongkhapa Guru Yoga. As you recite the lamrim prayer, do meditation and make very strong prayers and requests to the Buddha to receive realizations of each stage of the path.

Also reciting the Heart Sutra and then doing a little bit of meditation on emptiness is very powerful.

To practice in the following way is also good. After you sit down, remember the kindness and qualities of Buddha, whatever you know and can remember. Buddha sacrificed his life, he made charity of his life for three countless great eons. He practiced morality, patience, perseverance, concentration, wisdom and so forth for three countless great eons, then he completed two types of merit—the merit of wisdom and virtue—and then he achieved full enlightenment and revealed Dharma to us sentient beings. All of this was done for sentient beings, for our benefit.

Think, “Buddha sacrificed his life and made charity of his limbs to other sentient beings for my benefit. That is unbelievably kind. He did this for one year, for one eon, for three countless great eons. He practiced morality, patience, perseverance and so forth for three countless great eons for me. He sacrificed his life and completed the two types of merit for me. He achieved enlightenment for me and revealed all these teachings for me. How kind Buddha is, like limitless skies. Buddha is that much kinder than all the rest of the buddhas. How kind he is to me, like limitless space, like the sky, kinder than all the buddhas.” Think like that a few times—ten, fifteen, twenty-one times—how Buddha is kind to you; think over and over like this, meditating on the kindness of Buddha.

Recite the Buddha’s name, which expresses all the Buddha’s qualities, maybe twenty-one times. Then visualize nectar emitting from Buddha and entering into your body and mind, purifying you and all sentient beings.

After that you can do the dedication to actualize bodhicitta and by sealing it with emptiness, dedicate to achieving enlightenment for sentient beings.

You may not have this prayer, but there is a prayer that contains the stories of Buddha’s past lives, when he was a bodhisattva. Buddha became a king, and gave charity to others; he gave charity to a tiger family by sacrificing his life for them. If somebody harmed him, Buddha cherished that one most and in return gave only benefit. There are different prayers about Buddha in his bodhisattva times, and how he gave incredible benefit to other sentient beings. In the Tibetan text about chöd practice—chöd is slaying the ego, cutting the ego—at the end of that there’s a prayer which contains the bodhisattvas’ life stories, Jataka Tales. So that’s very, very good, very inspiring to pray to become like this, praying, “May I be able to practice like you, who did this.” It is very good to pray like this to the Buddha from the heart. Then you do the dedication.

Finally, dedicate the merits. “Due to all the past, present and future merits collected by me and the three time merits collected by others, may the bodhicitta which is the cause and source of all happiness for myself and for all sentient beings be generated within my mind, in the minds of my family members and in the minds of all sentient beings, without delay of even a second, and may that which is generated be increased.”

Make very, very strong prayers. Especially these days, the world is suffering even more than usual with so much killing and so many wars between countries. There is so much torture and unbelievable suffering happening in the world due to the turmoil of the negative emotional minds of anger, desire and the self-cherishing thought. So it’s very important to make strong prayers to actualize bodhicitta within oneself and in the mind of all sentient beings; to make strong prayers and dedicate the merits for that.

If we dedicate the merits to achieving enlightenment for sentient beings, it’s like putting a drop of water in the ocean. We can enjoy the drop all the time and it never finishes because it’s mixed with the ocean. Until the ocean finishes we can always enjoy it. If we dedicate the merits to achieve enlightenment for sentient beings it becomes inexhaustible, just as a drop of water put in the ocean becomes inexhaustible.

As I mentioned before, you can dedicate the merit either way, by meditating on their nature as subtle dependent arising or by looking at the hallucination as a hallucination. When you look at it like that, the effect in your heart is “empty,” in your heart that is empty. So, if you dedicate the merit by meditating on emptiness, the merit is protected, and then if anger or heresy arises it cannot destroy that merit.

If you dedicate the merit to the spread of Buddhadharma, for Buddhadharma to exist for a long time and spread, that includes everything; however, dedicate for the Buddha of Compassion, His Holiness Dalai Lama, the one object of refuge for all us sentient beings, and for the other virtuous friends to have a stable life and for all their holy wishes to succeed immediately. You can dedicate like this, “May His Holiness Dalai Lama, the Buddha of Compassion, and other holy beings have long lives and may the Buddhadharma and especially Lama Tsongkhapa’s teachings exist for a long time and be spread.” It is very important to pray for their long lives.

1 In order to train just like
The hero Manjushri who knows reality as it is
And just like Samantabhadra as well,
I completely dedicate all this goodness, just as they did.

With that dedication which is praised as greatest
By all the buddhas gone to freedom in the three times,
I, too, dedicate all my roots of goodness
For the attainments of the bodhisattva practice.
(- King of Prayers)  [Return to text]