During the summer of 1977, Lama Yeshe visited Madison, Wisconsin and stayed at the home and center of his teacher, Geshe Lhundup Sopa. While there he gave six weeks of teachings on Maitreya’s Discriminating between Relative and Ultimate Reality (Dharma-dharmata-vibhanga-karika) from which the following is a brief extract.

Maitreya’s root text is a dynamic, meditative approach to the profound view of reality, emphasizing the non-dual nature of all existence. In the following selection, Lama Yeshe comments on some central ideas from this text and offers an introduction to non-dualistic thought. 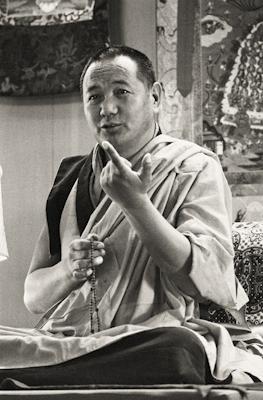 There is no purpose or value in studying this subject merely for intellectual stimulation. That would be a complete waste of time. The knowledge contained in Lord Maitreya’s teaching is incredibly deep but only worthwhile if pursued with the proper motivation. Unless we engage in this study for the purpose of eradicating our psychological problems, we would probably do better to spend our time trying to make Coca-Cola; at least then we could quench our thirst.

We have all probably heard a lot of gossip about mahamudra meditation. “Maha” means great and “mudra” means seal. If I have a government seal no one impedes or harasses me. When I have an official government seal I am free to go wherever I choose. The seal of mahamudra is similar, but here we are talking about a state of mind that is beyond our ordinary dualistic view of existence. This is the great seal that sets us free from the prison of samsara. Mahamudra itself is non-duality. It is the absolute true nature of all universal phenomena, be they internal or external.

What is meant by the term “non-duality”? All existing phenomena, whether deemed good or bad, are by nature beyond duality, beyond our false discriminations. Nothing that exists does so outside of non-duality. In other words, every existing energy is born within non-duality, functions within non-duality, and finally disappears into the nature of non-duality. We are born on this earth, live our lives and pass away all within the space of non-duality. This is the simple and natural truth, not some philosophy fabricated by Maitreya Buddha. We are talking about objective facts and the fundamental nature of reality, neither more nor less.

If we are to achieve the realization of mahamudra it is essential to develop skill in the art of meditation. But to meditate properly we must first listen carefully to a faultless exposition of the subject matter. This will give us an accurate and precise understanding of the aim of meditation. If we have a clear intention of putting such explanations into practice in meditation, then merely to hear the teachings becomes a powerful experience instead of some kind of superficial intellectual “trip.”

To understand that the dualistic mind, lost in false discriminations, is the source of beginningless and endless suffering for oneself and others is to have a truly valuable insight that will profoundly change the quality of our daily lives.

The dualistic mind is, by nature, contradictory. It sets up an internal dialogue that has forever disturbed our peace. We are always thinking, “Maybe this, maybe that, maybe something else”—and so on. Dualistic thinking perpetuates a conflict within our mind. It causes us to be agitated and deeply confused. When we know that this confusion is the result of a mind conditioned by the dualistic view of reality, we can do something about it. Until then it will be impossible for us to come to grips with the problem because we have not correctly identified its true cause. It is not enough merely to treat symptoms. It is clear that we must completely eradicate the source of problems if we are to become truly problem-free.

As our understanding and knowledge of mahamudra deepens we shall come to realize that the way things appear to us is simply a projection of our mind. For example, it is not a question of whether Madison, Wisconsin exists or not, but whether the way in which we perceive Madison exists in reality or not. It should be clear that this is not the same as the nihilistic assertion that nothing exists. We are simply seeking the correct view of reality.

To clarify this point further we can investigate the fantasies we project upon our friends and the people we live with or meet every day. Our dualistic mind superimposes an attractive or repellent mask upon the presented image of everyone we meet, with the result that reactions of desire and aversion arise which color our attitudes and our behavior towards this person. We begin to discriminate: “He is good,” or “She is bad.” Such rigid, preconceived attitudes make it impossible to communicate properly with even our close friends, much less with the profound wisdom of an enlightened being, or buddha.

If we persistently investigate the inner workings of the mind, we shall eventually be able to break through our habitual overconcretized mode of perceiving the universe and let some space and light into our consciousness. In time we shall have an insight into what non-duality actually is. At that time we should simply meditate without intellect or discursive thought. With strong determination we should merely let the mind meditate single-pointedly on the vision of non-duality, beyond subject/object, good/bad, and so on. The vision of non-duality can be so vivid and powerful that we feel we can almost reach out and touch it. It is very important simply to mingle the mind with this new experience of joy and luminosity without seeking it by analysis. We must realize directly that non-duality is the universal truth of reality.

In directing our mind along the path of Dharma it is best not to expect too much too quickly. The path is a gradual process to be negotiated step by step. Before one can follow practices that bring a quick and profound result there are preparatory practices that must be done. Lama Tsongkhapa, for example, strove very hard for the realization of shunyata, or emptiness, but met with no success, in spite of being a renowned teacher with many disciples. Finally Manjushri, the embodiment of perfect wisdom, revealed to him that he must make a retreat in order to purify his mind-stream completely of all gross and subtle delusions, as well as their imprints. Tsongkhapa then withdrew to a cave, where he did three and a half million prostrations as well as innumerable mandala offerings and other preliminary purification practices. As his thought-stream became purified, his understanding of emptiness began to deepen. This transformation continued until he reached full awakening.

It is helpful if we understand the realization of non-duality has many levels or degrees. From the philosophical point of view there are two Indian schools of Mahayana Buddhist thought: the Cittamatra or Mind Only school and the Madhyamaka or Middle Way school with its Prasangika or Consequentialist subdivision. Both of these schools agree that the dualistic view is deceptive and therefore not ultimately true, and both assert that non-duality is the absolute nature of all things and is ultimately true. Though the Mind Only and Consequentialist schools agree on these points, their understanding of what is meant by non-duality varies somewhat.

From the Consequentialist point of view the Mind Only doctrine presents a helpful approach to conventional truth but does not accurately describe the absolute true nature of reality. In other words, they state that the Mind Only view of reality is still tainted by superstitious beliefs. Despite this, even the Consequentialists agree that if we are able to realize the Mind Only view we are qualified to practice the profound methods of tantric yoga and reach unimaginably high levels of understanding.

What we should know is that the Mind Only school contends that all objects of the sense world are simply manifestations of mental energy and do not exist externally at all. According to the Consequentialists it is more correct to say that the existence of all things depends upon recognition by an imputing consciousness. Both schools attach great importance to the mind’s role in determining the way in which entities arise, but the higher Consequentialist school says that to assert that there are no external phenomena whatsoever—that there is nothing other than mind—is an error. Such a view deviates from the true middle path that transcends all extremes.

The Mind Only meditators destroy the dualistic view by seeing that all objects in the field of the six senses are no more than mere projections of our mind itself. All relative phenomena arise and disappear like the bubbles in a glass of Coca-Cola. In this analogy, Coca-Cola corresponds to the mind itself while the bubbles arising within it are all relative phenomena perceived by the six senses. Can the bubbles in the Coca-Cola be separated from the Coca-Cola? No. Therefore, as they are not separate, they are non-dualistic. When a deep understanding of this pervades our consciousness, the foundations of samsara are shaken.

The fully awakened Lama Tsongkhapa, in his work The Heart of Perfection, explained that first we must master the Mind Only view because from that elevated position we can easily progress to the highest, most sublime view, that of the Consequentialists. It is for this very reason that Maitreya Buddha explained the Mind Only doctrine. It is the bridge we rely upon to cross over from a completely materialistic outlook to the transcendental view of reality which is beyond all extremes.

When I expound subjects of this kind, I try to avoid being too philosophical—dwelling on “Mind Only says this,” “Consequentialists assert that”—especially when we are dealing with such subtle and penetrating texts as this one. Generally speaking, this teaching by Maitreya Buddha is considered to be a Mind Only text; however, it is not necessarily confined to a Mind Only interpretation. This entire text also lends itself perfectly to a Consequentialist explanation of reality and the two levels of truth. It is essential to know these two levels of truth well because when we successfully reconcile them we arrive at a true understanding of things as they actually are, and become free of suffering and its cause.

I would like to go over this point once more. Each phenomenon has two characteristic qualities or natures. One is its relative appearance: its color, shape, quality, texture, and so forth. This is termed “deceptive truth” because it appears to exist independently of causes and conditions. In terms of this level of truth we discriminate subject and object, this and that, and so on. Even though all phenomena, internal and external, partake of this relative nature, they nevertheless arise, exist and pass away without ever departing from the sphere of non-duality. The second level of truth is the non-dualistic, absolute, true nature of things, which spontaneously co-exists with all phenomena.

Phenomena themselves and the absolute nature of phenomena, have distinctive qualities; they are not the same thing. All phenomena simultaneously possess a relative or conventional mode of existence as well as an absolute, true nature, which is non-dualistic. Certain energies come together and produce a relative phenomenon. Its relative mode of existence is dualistic, and appears in terms of a subject and object relationship; yet all things arise within the space of non-duality.

To conclude, in order to understand non-duality we have to understand emptiness. We can say therefore that non-duality is emptiness. But all the bubbles of relative phenomena, though they themselves are ultimately non-dual, are not emptiness. Relative and absolute truth do not pervade each other, but both are pervaded by non-duality. If we can understand the distinctive characteristics as well as the non-contradictory natures of these two levels of truth, we can gain freedom from even the subtlest delusions of mind. There can be no stronger motive for study and meditation than this.