Meditation on Emptiness at Vulture's Peak (Audio and Transcript)

On 12 March 2014, Kyabje Lama Zopa Rinpoche ascended Vulture’s Peak, Rajgir, India, to give a transmission of the Vajra Cutter Sutra to a group of students. Rinpoche began by reading out a Dedication Prayer by Mipham Dawa Rinpoche, then, after the sutra transmission, Rinpoche led students in a meditation on emptiness.

Ven. Sarah Thresher reports that, “Rinpoche’s voice was stable and clear and resounded as he guided us step by step on how to realize emptiness and cut the root of samsara.” This is a transcript of that meditation, checked and lightly edited by Ven. Sarah.

Click on the links above to listen to the teaching. Note that the prayers and devotions of other visitors to Vulture's Peak are audible in the background. 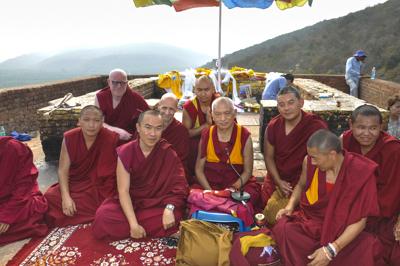 There are many quotations to meditate on emptiness, but unless I read I don’t remember. So one thing, one quotation I remember is Seventh Dalai Lama:

Every single base of samsara and nirvana,
Although illusion made by one’s own conception,
Is held as ultimate so therefore deceives,
Do not cling to it as ultimate, look at it as empty.

Then believing the illusion dön dam par “ultimately exists.” Dön dam par zung nä lu wai chir. “Looking at it as real,” existing from their side. The I, action, object, all the phenomena real, real, as REAL. Existing from their own side, dön dam par zung [holding as ultimate]. Then that cheats you. That concept cheats you completely whole your life; not only that, from beginningless samsara. Not only from this morning to night cheats you completely. Completely cheats you. And cheats you from birth until death. Completely cheated you. Then cheats you from beginningless rebirth… if you do not realize emptiness. 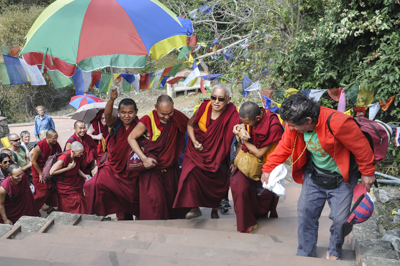 So therefore the instruction is: Dön dam la ma zhen, “Don’t cling to it.” Don’t believe things are real, truly existent, things are real. As they appear real to our hallucinated mind due to ignorance, don’t believe real. “Look at it empty.” Look at the I empty, action empty, object empty, so the whole samsara, nirvana, the whole thing as empty, as it is empty.

So before the meditation...

So we meditate in this a little while.

So now, good to meditate for hours, however, for a long time, to see more clearly.

So even the compassion, bodhicitta, things appear as truly existent, as long assentient beings [are] suffering, until we become enlightened. The minute when we purify subtle obscuration, achieve enlightenment, then we don’t have the dualistic view, things appearing—I, action, object—things existing from its own side, doesn’t have that. So then appears, things existing [in] mere name, appears like that. So not for us sentient beings. [Things appear as] truly existent, except in equipoise meditation.

So appearing real, truly existent, existing from its own side, appearing real. I, action, object, that hallucination happens due to past ignorance having left negative imprint on the mind. So it is right now our mind has, our valid mind has merely imputed I. So should appear the I merely imputed by the mind, but not, but not in the reality. It appears totally wrong, false, hallucination. So total hallucination existing from its own side, truly existent, real I.

Then, first second merely labeled, merely imputed; second second appeared real existence, real I; third second then superstition tog-pa, conceptual, holds it true. The real I appeared, conceptual thought holds it real, entrusts that real. That concept, such sort of thing, that concept is the root of samsara.

That self-concept that is root of samsara. That is root of cancer, all the sicknesses, root of old age, root of death, why we have to die, that is the root, that self-concept, wrong concept, ignorance, is the root of our death. Why we have to be reborn, that’s the root—what causes death, what causes rebirth, what causes old age, sickness. Not only that, also suffering of change, all the comfort/pleasure of samsara, where it comes from is that. Suffering, suffering of change. Then from where the third suffering, pervasive compounding suffering khyab pa du je kyi dug ngäl comes from that. The whole entire ocean of samsaric suffering comes from that concept, the self-concept. 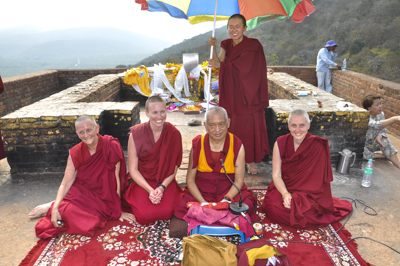 So that’s a little one-minute meditation.

So empty, do not exist from its own side, so to be correct, it has to support for the existence, the conventional truth—kun dzob den pa. Kun dzob den pa, realizing, concentrating on emptiness helps kun dzob den pa, the conventional truth. It should help for that. So it exists, I, action, object, phenomena exist in mere name, being merely labeled by mind. So while it’s empty it exists; while it’s existing, it is empty. So unified emptiness and dependent arising on I, on every single subject of samsara, every single nirvana. So that’s the middle way. Correct.

So thank you very much!