This Life Can Stop at Any Time

Lama Zopa Rinpoche taught on impermanence and death at Kopan Course No.  26, held at Kopan Monastery, Nepal, in Nov–Dec 1993. This teaching is excerpted from Lecture Nine of the course. Lightly edited by Gordon McDougall. 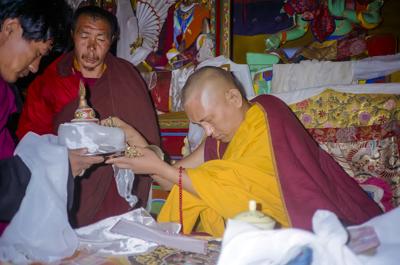 Practicing mindfulness, the more we realize the reality of the phenomena, particularly of the I and the aggregates, the sense objects and so forth, the more we are able to see how other sentient beings are suffering, how their life is totally living in the concept of permanence, their hallucinated minds apprehending impermanent phenomena—that are changing within every second by causes and conditions—as permanent.

We all have this wrong concept of permanence, looking at impermanent phenomena as if they are permanent, as if our life and the sense objects in our life, and the surrounding people—friends, enemies and so forth—everything is always going to be like this. We have a fixed concept that things have always been like that and that they are always going to be like that. They’re kind of fixed; they’re going to last. When we are not aware of their nature, if it’s left up to our mind, then we have the concept that things are going to last a long time, it’s always going to be always like that.

The day that the impermanence of death happens, at that time it is just like last night’s dream. That appearance of this life that was happening is gone. It happened and then it is gone. Like when there is a flash of lightning, during that moment we have the appearance of a brilliant, bright object. We see our own human body and the people around us as well as all the other phenomena—this happens and then it is gone.

When we look at others and ourselves we can see that even though we have met Dharma, we still can’t conquer death, we can’t overcome death. We have not yet gained complete freedom over the rebirth and death like the arhats and the arya bodhisattvas have. The practitioners of the Lesser Vehicle path, the arhats, have completely ceased the cause of the suffering, karma and delusions, including the seed of delusions, ignorance, the concept of inherent existence, and have achieved freedom over death and rebirth caused by karma and delusion. Arya bodhisattvas, the practitioners of the Mahayana, the great vehicle, have actualized the wisdom directly perceiving emptiness and have completely abandoned suffering rebirth, old age, sickness and death; they never have to experience them again.

Without practicing tantra, even by practicing the Lesser Vehicle path or the bodhisattva path, the Paramitayana, we are able to overcome death and rebirth. Even if we don’t get to accomplish these levels in this life, where we can be completely free from death and rebirth, by having met the Buddhadharma we can at least make preparation to receive a better rebirth again with a perfect human body, and then we can continue to practice the Dharma, and like this to complete the path to full enlightenment. The reason we do this is for the sake of the numberless sentient beings, to free them from all the sufferings and lead them to peerless happiness, to full enlightenment.

In this case, what is called “death” is just like changing our clothes. We take off our old clothes and put on new ones—this new body with which we can practice Dharma under even better conditions. Even if we don’t get to achieve very high realizations in this life, at least we can accomplish this [better rebirth] by practicing the holy Dharma.

Kopan Course No. 26 (1993)
The Middle Way Between the Two Extremes
The Wish-Granting Jewel and Karma
Looking for a Problem, We Cannot Find It