Lama Zopa Rinpoche gave these teachings on lam-rim in Nice, France in July 1990. The series includes an oral transmission of the Heart Sutra and teachings on emptiness, impermanence and death, and transforming problems. 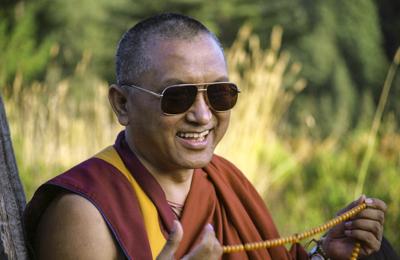 Do not commit any unwholesome actions, Enjoy creating the perfect virtue And subdue one's own mind: This is the teaching of the Buddha.

So therefore how we create the problem by the mind is when we believe something that which do not exist in the reality, something opposite, something contradictory to the reality, so when that doesn't function, when that doesn't happen what we believe, what we expect, which is contradictory to the characteristics or the reality of these phenomena then this itself becomes the problem. So how we create a problem in our life is like that. So if we practice awareness, if we practice mindfulness, awareness, in the nature of the I, action, object, these causative phenomena, if we practice awareness, mindfulness in their nature which exists, which functions and then ys you do not find a problem, you don't create a problem by the mind. So this meditation, it became very important to solve problems in the life, this awareness. So one of the important, fundamental meditation practices to be aware what exists, the way things exist, that becomes most important, fundamental meditation taught by Buddha.

So suddenly when you think of the reality of the object there's no problem, you don't see a problem. But when you, when the mind is distracted by the hallucination, by the wrong view, wrong philosophy, wrong view, which is opposite to reality so ys when one is not aware of the reality of the things, of these phenomena, so one exaggerate, one makes a lot of exaggeration, projection on the self, action, object so ys that is the problem. So in the life experience that is not happening, what you project, yourself, action, object is not happening, what the phenomena shows, what you see, what you experience is the reality, so that point, what one project, what one believe and reality what we experience in the life, what it shows, so when those things do not fit, when these things happen opposite to what we project, what we, wish that we generate, which doesn't fit with the reality, so then that time the fear comes, worry comes, nervous breaking, depression, all these problems rise, when you see, when you have the experience in the life of the reality, which is opposite to the projection, wish what we generate.

So these things, these phenomena they change within every second by cause and conditions and that these things can be ceased any time. So therefore, this is the nature, and this is what we experience in the life, whether we accept this or even we don't want to accept this, even we don't want to happen this, so therefore there's no point to have dissatisfactory mind, desire, and ignorance, this wrong conception believing something that doesn't exist in the reality, while these things are impermanent nature but believing as permanent. Believing that these things do not change by cause and conditions, that they last, that they're permanent. Then, no point to get angry, there's no meaning to get angry, because nature of these things, these phenomena are transitory and that they can be ceased at any time.

So same thing, "I am thinking", there is no other reason at all except only the base, the mind, is thinking. So like this, from morning until night, constantly we label according to the, constantly we label I on these aggregates and according to the functions of the aggregates, what the body does and what the mind does, so "I am eating," "I am sleeping," "I am talking" so "I am this and that", so the mind merely imputes constantly according to the functions of the basis, what is does, the aggregates, the body and mind. So you see now, from morning until night, "I do this," "I do that," this and that, all this an idea or being just simply an idea or a concept. So you can see now there's no such real thing there, there's no real one from its own side, a self, a real one from its own side so you see from morning until night, on this base, association of body and mind, that real self is completely empty, that real self, real one from its own side, doesn't exist at all.

…but in the reality there's no such self. If you analyze, What is the self? What is it exactly? That I that we are always being concerned, worried, afraid something will happen to that, so if you analyze what it is exactly, so in the reality, so like this, scientific like this, if you analyze the nature, you cannot find that real self, something concrete or real self, unlabeled by the mind, that self exists, real self that exists without depending on the base, the association of body and mind, this base and the mind which labels, so there's no such real self, cannot be found if you search where it is, where it's located, outside of the body, inside of the body, where it is located? If you search cannot be found from the tip of the hair down to the toes, in the heart, in the chest, it looks like in the chest, it looks like findable somewhere in the chest but if you really search, if you really analyze where it is exactly located, inside the chest where, when you don't analyze it looks like there but as soon as you start to analyze, it becomes unclear. As soon as you start to analyze where it is inside the chest, suddenly, immediately it becomes unclear. So could not, if you search could not find on the heart, on the ?beating heart, in any part of the chest, you cannot find. Not in the brain, neither in the chest, so you just look at, you just be aware of the inside of the body, inside the chest, all the things what are in the chest, down below the neck, down to the belly, just being aware the physical part and then see, then one part of the mind look for the I, that real self, one part of the mind being aware of the pieces inside the body, down below the neck, down to belly, being aware, as you are seeing them, one part of the mind search for the real self. [long pause]

So that real self which we have been projecting and have been cherishing, thinking this is the most precious, most important, in the reality it is nowhere, it exists nowhere, neither inside nor outside. [pause]

So that doesn't exist at all, but there is I that which experiences suffering, which experiences happiness, which looks for solution to eliminate the problems, which does meditation practices, the I which seeks for ultimate happiness, the I that which is sitting, sleeping, eating, walking, there is a I, there is a I that which does all these activities, but that one is nothing else other than what is merely imputed on the base, on this base, association of body and mind, by the mind. So therefore what it is this I, the self, what it is, now you see deeply concentrate, so what it is. Now we analyze, so what it is. It's neither the body nor the mind, it's not the aggregates, nothing of this.

Lam-rim Teachings: First Discourse Part B »
+ View all Teachings on this topic
+ View All Teachings