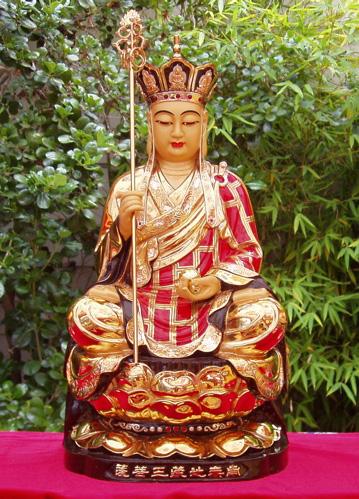 I prostrate, go for refuge, and make offerings to the bodhisattva Ksitigarbha who has unbearable compassion for me and all sentient beings who are suffering and whose minds are obscured, who has qualities like the sky and liberates sentient beings from all suffering and gives every happiness. Please grant blessings! (3x)

Then, when you ask for "blessings," think in the mind the whole path to enlightenment – this is the blessing to be received. So the extensive benefits of this mantra will be translated. This is the mantra that Ksitigarbha heard from buddhas equaling the number of sand grains of the river Ganga (in India). He made offerings to them and then received this mantra. This is the story of the mantra – how to receive all of the benefits.

This mantra is to be used for any difficulties of problems. It is the best one to do for any problems in any situation. Even reciting it only four or five times – just a few times – is very powerful. It speaks so much of power, showing how important the bodhisattva is. Even to recite or just to think of the name of the bodhisattva is very, very powerful.

Buddha’s Praise of Ksitigarbha
You have generated stability of thought and the pure altruistic thought of bodhichitta and have eliminated the sufferings of immeasurable sentient beings. I see (sentient beings) receiving happiness as from a wish-granting jewel, and like the vajra you cut the nets of others’ doubts. You offer holy offerings to the foe destroyers, the qualified ones gone beyond, with great compassionate thought and perseverance. You liberate sentient beings from their sufferings with oceans of wisdom. Because you have no fear (delusions), you have gone beyond samsara.

Brahma heard this mantra and then said to the entire assembly, “Please rejoice in the mantra I have now said.”

This practice is especially beneficial for those who have heavy problems, serious health problems, big projects, or financial difficulties. I suggest it is extremely powerful to recite every day for protection, at least four or five times or more, depending on how crucial it is.

This practice is effective even to grow crops well and to protect land and crops. In the sutra of the bodhisattva Ksitigarbha are explained the extensive benefits and qualities: they are like the sky, like skies of benefit to all beings. There have been experiences, similar benefits (to those spoken of in the sutra) received by those who practice Ksitigarbha.