The following are excerpts of the teachings given by Lama Thubten Zopa Rinpoche at the Thirty-third Kopan Meditation Course, held at Kopan Monastery, Nepal, in 2000. Included is an oral transmission of the Medicine Buddha mantra and portions of the Diamond Cutter Sutra.

Lectures 6-10 are below; the first five lectures can be found here. You can also read the entire lightly edited transcript here. 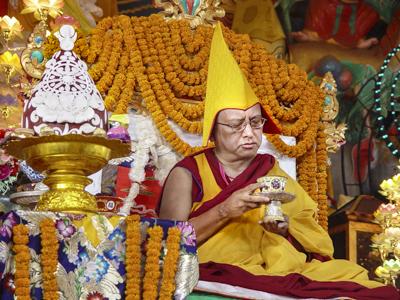 Day 6: How Things Appear to Exist from their Own Side

Without realising, without meditating impermanence, death – not looking at these phenomena’s impermanent nature, the result of this wrong concept leads oneself only to suffering, endless suffering of samsara.

So you analyse, meditate this way. This is a good example, to meditate on emptiness. So there’s year

So when we think of ‘year’, how does it appear? The year is something inherently existent year, really year. In other words, real year appearing from there. Real year. If you put it in the simple explanation, according to how it appears to our mind and the way we apprehend ‘year’, the way we think of ‘year’ is as a real year, not merely labeled by the mind.

The meaning of ‘real’ for us – for us, when we use the word ‘real’ in our daily life it means, actually, we should know, actually people are talking, yourself is talking, the false, the real ‘I’. When you say ‘me’, ‘I’m really there’ or ‘I’m really here’ or ‘I’m something’, ‘I really did it’ or something – whenever we use those words, actually, if one can understand, if one can relate to teachings on emptiness, if you can relate to the teachings on emptiness, that time we are talking about false ‘I’. Whatever object when you think real, we’re not talking what exists; we’re talking what doesn’t exist. Believing it exists, what doesn’t exist. What appears doesn’t exist. The way things, the way the ‘I’, the way phenomena appear to us, to our hallucinated mind, not merely labeled by mind. As long as it appears to you that way – not merely labeled by mind - they don’t exist. They’re totally empty there. They’re totally empty right there. From where it is appearing, it is totally empty there.

I think I might have mentioned before already I think. But, anyway, it’s useful to bring it up again anyway – very important logic; very important analysis to realise emptiness. So if you think you’re seeing this design at the same time you’re seeing the ‘A’ [pause] – well, first you know that from the evolution that I explained. You don’t see ‘A’, that this is ‘A’, at the same time when you see the design. Together doesn’t happen. Seeing this base, this design, which is the base, and seeing this ‘A’, that this is ‘A’, doesn’t come together; doesn’t happen together.

So, from the experience when you learn alphabet, you can see very clearly, you have to see the base first, and then, that makes your mind to label ‘A’ and then appear as ‘A’, then see as ‘A’. So from the experience, if you – from the experience, it’s like that. And that is how we see everything in daily life. Not only just this ‘A’, not only the alphabet, but this is how we see everything. This is the evolution. This is the evolution to see anything. So all these phenomena that we see here – the statues and pillars, everything, lights – all these phenomena, everything that we see here, the procedure is like that. Everything is like that - the procedure.

The light, for example - the phenomena which functions to dispel darkness. You see that first. That’s the base. You see that first then, by seeing that, that thing which dispels darkness, then your mind make up, that causes your mind to make up the particular label ‘light’; name, the particular label ‘light’. By seeing that particular phenomena, which has the function of dispelling darkness, that causes our mind to make up the label ‘light’. What is ‘light’ is that’s all – merely imputed because base does function of dispelling darkness, so ‘light’. Relating to that, you’re relating to that, so then due to existence of that base, you made up label ‘light’. And then same: what function that base does then, also, you label to the ‘light’; light dispels darkness. Labeled.

So, therefore, this is the evolution. Before you put the label, before you see the label, you have to see the base first. That’s the preliminary. First base comes into existence and then the label comes into existence by imputing. So, therefore, seeing the ‘A’ comes after seeing the base. So, now, this also, one can meditate on emptiness like this. After your mind imputed the ‘A’, the reality is by seeing that your mind merely imputed ‘A’. That’s it. So now, here, after the imputation, after your mind imputed ‘A’, after that, when the ‘A’ appears back to you it doesn’t appear back to you merely imputed by mind.

So now, here, now you see the real ‘A’ on that design. Now you analyse: where is it? So like that. Anyway, like that. You visualise the other one. I try to make ‘A’ or here or here. Anyway, this little bit longer maybe. Anyway, I’m joking!

So appear like this, as if it is findable on that base, on that design, when we do not analyse that. So, here, I’m saying that [pause] so now you can get some idea when we say ‘alphabet’, when we see ‘A’, in our view there is a real ‘A’ there on that design. There’s a real ‘A’ there appearing from there. What I was trying to say before, for example, as I introduced those analyses, when you look for that real ‘A’, which means appearing from there, existing from its own side. When you analyse you don’t find there.

Neither the merely imputed ‘I’ nor the real ‘A’; neither the merely imputed ‘A’ nor the real ‘A’, or ‘A’ appearing from its own side, it doesn’t exist there when you look for. When you analyse, it’s not there. When we do not analyse it appears as if it is there on that base. Anyway, that real ‘A’ appearing to us, that is another example of object to be refuted, what is called in Tibetan gakja. For example, [pause] to be able to realise the emptiness of the ‘I’ through this analysis, the reasoning ‘one or many’ – put it this way, by reasoning, by using the logical reason of either it exists as one or it exists separately. [pause] The logical reason which proves that is not one-ness, neither one-ness nor it exists separately. I think, maybe, at this point of reasoning neither is one or no exist separately, so we have some rest. we have some rest in emptiness.

[Rinpoche has discussion in Tibetan]

So, what I was saying before, there is among the many reasonings, [fourfold reasoning?] there are different logics to meditate on emptiness. The one basic common one is meditating on emptiness by reasoning that nothing exists either one-ness – in the Tibetan, chik du dorje tentsik.(?) It sounds many but is not. If you just think of only the word of translating then it looks like many, then it will create confusion. That’s not what you start first; whether ‘one or many’ comes later. That analysis comes later. [Tibetan] Whether it exists, the reasoning that it doesn’t exist either one-ness or separately [Tibetan] it sounds many but is not. There’s a reasoning, ‘one or many’, but it comes, the second part, that actual one, comes second part. So sometimes if you only think of the Tibetan word [Tibetan] usually means ‘many’. But if you translate just without thinking of the meaning, without thinking of the way of reasoning, without knowing that, without thinking of that, then can be, it will be wrong translation. But the second part then correct.

If the ‘I’ is inherently existent, what is saying here, the way the ‘I’ appears to you is something real one, in a sense appearing from its own side, existing from its own side, not merely labeled by mind. If this is true, if such an ‘I’ does exist, if this is true, then it should be, it should exist either… so like this. Maybe I mention the outline, the analysis of the four vital or important points.

Important point is recognising object to be refuted, gakja ….

Day 6: The Emptiness of the I: Not One-ness With Aggregates, Not Separate From the Aggregates »
+ View all Teachings on this topic
+ View All Teachings

E-letter No. 96: May 2011
E-letter No. 97: June 2011
How to Live with Bodhicitta
Compassion is the Essence of Religion
Putting Effort into Dharma Practice
Self-cherishing Brings All Unhappiness
The Merely Labeled I
The Kindness of the Mother
Kopan Course No. 33 (2000): Audio and Unedited Transcripts
Kopan Course No. 33 (2000)
LYWA Multimedia: The Merely Imputed I
Liberation: Lamrim Outline 1
Liberation: Lamrim Outline 2